What Can Palestinians Expect from the ICC?

The International Criminal Court has become a court of last resort for Palestinians. 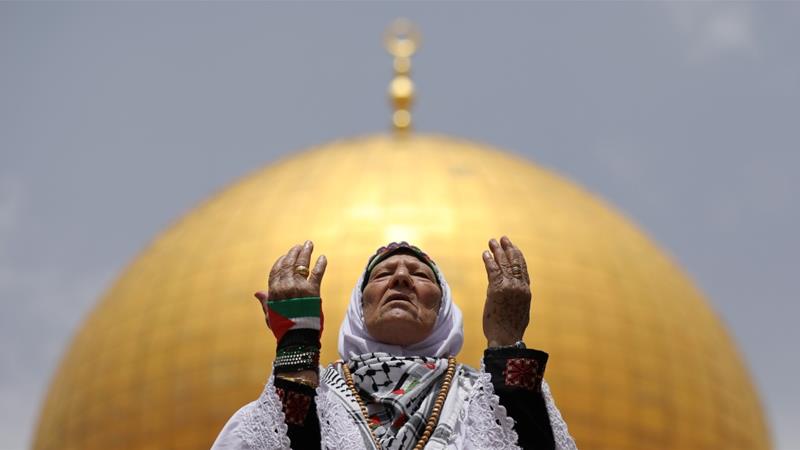 The Dome of the Rock is seen in the background as a Palestinian woman prays on the second Friday of the holy fasting month of Ramadan, in Jerusalem’s Old City, May 25, 2018. [Ammar Awad/Reuters]

28 May 2018 – Seventy years have passed since the Palestinians were expelled en masse from their homes to pave the way for the creation of the state of Israel. The recent seven-week Great Return March along the Gaza fence focused the world’s attention on the still unfulfilled right of Palestinian refugees to return to their homes and the more than a decade-long Israeli blockade that has turned the Gaza Strip into an open-air prison.

It also underscored the deadly consequences of impunity – Israeli soldiers killed 111 Palestinians during the march, with most of them shot with live ammunition. As the United Nations High Commissioner for Human Rights concluded in 2017, “impunity prevails across the board for violations allegedly committed by Israeli forces, both in Gaza and the West Bank.”

The prosecutor has already examined the situation in Palestine within the framework of a preliminary inquiry launched in 2015, with a view to establishing whether or not there is “a reasonable basis to believe” that war crimes and crimes against humanity have been committed by Israelis and Palestinians on Palestinian territory since June 13, 2014. The state referral does not relieve the prosecutor from her duty to establish a reasonable basis to proceed.

The prosecutor has previously spent a decade or more reviewing situations at the preliminary examination stage from The Hague, far removed from the scenes of the crimes.

The prosecutor’s team relies on publicly available information and files submitted by civil society, such as the files my organisation, Al-Haq, together with its partners turned in regarding the 2014 offensive on the Gaza Strip that left more than 1,630 Palestinian civilians dead.

Al-Haq and its partners have also submitted a file on crimes committed in the West Bank, including Jerusalem.

These extended preliminary examinations often end up frustrating the very victims that the ICC is meant to serve. Palestine’s referral can spur the case forward, into the formal investigation stage that precedes arrest warrants and indictments – and one critical step closer to closing the impunity gap.

During the past 70 years of dispossession and 50 years of occupation, not a single Israeli high-ranking civilian or military official has been prosecuted for committing a crime against Palestinians. In the aftermath of the 2014 offensive, Al-Haq joined three other Palestinian human rights organisations in apprising the ICC prosecutor of the status of 369 criminal complaints submitted to the Office of the Israeli Military Advocate General.

The overwhelming majority of these complaints have not even been investigated – and not a single indictment has been issued. Israeli organisations have similar findings.

In the very few instances that an Israeli low-level soldier has been investigated and prosecuted, the eventual sentence handed down has not been commensurate with the severity of the criminal conduct. Most recently, in May 2018, an Israeli soldier was released after serving nine months in prison for the killing of Palestinian Abdul Fatah al-Sharif.

On camera, he shot Abdul point-blank in the head as he laid wounded and defenceless on the ground. Israeli Prime Minister Benjamin Netanyahu announced shortly following the conviction that he would support a pardon and that the soldier’s conviction marked “a painful day“.

As a representative of the Palestinian human rights organisation Al-Haq and its partners before the ICC, I have often been confronted with the proposition that past impunity may predetermine the possibility for justice in the future. What can Palestinians expect going forward?

The ICC is mired in criticism that it focuses on the African continent, that its processes are unjustifiably long, and that the scope of its investigations and prosecutions are too narrow. This criticism doesn’t negate the fact that the ICC is a court of last resort, set up to close existing impunity gaps and to function as an independent judicial institution – unhindered by politics.

As such, it can act as a counterweight to efforts by the international community to pursue endless “peace” processes at the expense of the rights of victims.

With the Trump administration’s recent recognition of Jerusalem as the capital of Israel, in violation of its own international obligations, and the lack of concrete action by the international community to hold Israel accountable, it is now more important than ever that Palestinians do not give up on their pursuit of justice.

The ICC won’t be able to ensure justice for all Palestinian victims. It can, however, see to it that Israel no longer unlawfully kills, tortures, or displaces Palestinians while stealing their land for illegal settlements, without fear of any consequences.

And while the ICC prosecutor will not be able to change the past, she may be able to positively influence the future. In opening an investigation and subsequently prosecuting senior Israelis, the ICC will be sending a powerful message that Palestinians, like all other peoples, are worthy of justice, and that redress is not a gift but a right that must be unconditionally fulfilled.

Nada Kiswanson is a lawyer specialising in international criminal and human rights law.