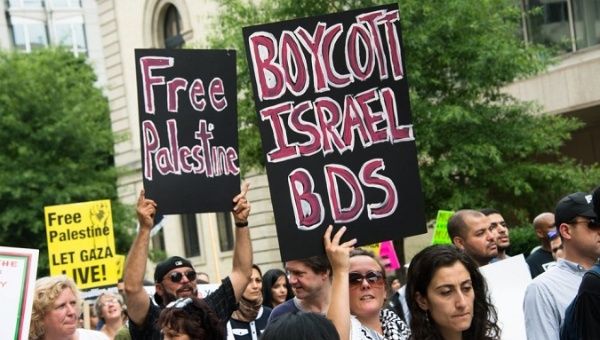 11 Jul 2018 – The Ireland senate approved the Occupied Territories Bill, which bans all trade with illegal Israeli settlements in the occupied West Bank, today. The Irish government opposed the legislation, but 25 independent and opposition lawmakers secured its approval.

Ireland has become the first country to prohibit “the import and sales of goods, services and natural resources originating in illegal settlements in occupied territories.”

The Israeli Foreign Ministry responded to the decision saying that “the Irish Senate has given its hand to an aggressive, dangerous and radical populist anti-Israel boycott initiative that undermines prospects for a dialogue between Israel and the Palestinians.”

Israeli Prime Minister Benjamin Netanyahu also protested, saying the bill “is to support the BDS movement and harm the State of Israel.”

The Boycott, Divestment, and Sanctions (BDS) movement is a Palestinian-led international campaign launched in 2005 to push for the end of Israel’s over-50-year-long military occupation of Palestine, the end of the apartheid regime, and for the recognition of the right to return of the over five million Palestinian refugees.

Despite attempts to discredit the BDS movement, Israel’s lethal response against protesters who participated in the Great March of Return, which began on March 30, has given the international campaign more relevance and victories.

The bill was introduced by Frances Black, a well-known singer and member of the Seanad, the upper house in Ireland’s Parliament.

There is international consensus on the illegality of these settlements. Earlier this year the United Nations Human Rights Council published a report on the role businesses play in Israel’s violations of international humanitarian law, “contributing to Israel’s confiscation of land, facilitate the transfer of its population into the Occupied Palestinian Territory and… the exploitation of Palestine’s natural resources.”