Bulldozing Palestine, One Village at a Time

Israel wants the village of Khan al-Ahmar razed to the ground to cut off Jerusalem from the West Bank. 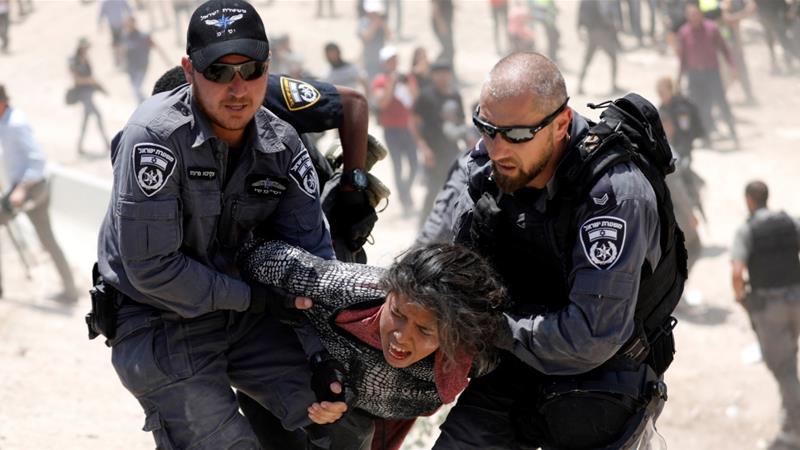 Israeli policemen detain a Palestinian girl in the Palestinian Bedouin village of Khan al-Ahmar near Jerusalem in the occupied West Bank on July 4, 2018. [Reuters/Mohamad Torokman]

10 Jul 2018 – It was a bit ironic to see a small group of Israeli settlers enter the large solidarity tent stationed at the entrance of Khan al-Ahmar last Wednesday. They had come, they said, to show “solidarity” with the Palestinian Bedouins protesting a demolition order.

Since 2017, the whole Bedouin village has been threatened with demolition by the Israeli authorities. Earlier that day, Israeli soldiers attacked villagers and activists who had staged a protest, injuring 35.

Khan al-Ahmar, a village of 180 people, is about 15km northeast of Jerusalem and falls within what is known as Area C of the occupied West Bank, as defined by the Oslo Accords. The area has been inundated with more than 300,000 Israelis living in 125 illegal settlements and is under Israeli administrative control. Under the Oslo Accords, the Palestinian Authorities was supposed to take over administering the area, but, of course, Israel never let that happen.

As a result, it is now the Israeli state that controls the land in Area C and that decides on building permits. Khan al-Ahmar existed before the state of Israel was created in 1948. In the 1950s, Palestinian Bedouins expelled from the Negev desert by the Israeli army moved to the West Bank and settled in the village, expanding it.

The Israeli state has now decided that all its buildings are illegal and have to be demolished. Khan al-Ahmar is located between two expanding illegal Israeli settlements – Kfar Adumim (founded in 1979) and Maale Adumim (founded in 1975) – and on the so-called “E1 corridor” between East Jerusalem and the West Bank, which the Israeli state would like to control in order to cut off Palestinian access to the city.

It was settlers from these two settlements that showed up at Khan al-Ahmar on Wednesday to show “support” for the protest, as if their existence has nothing to do with the problem the Palestinian village residents were facing.

The prospect of displacement and misery has made the people of Khan al-Ahmar accept help from whoever offers it. If anyone can stop the Israeli bulldozers from razing their homes, then let them come.

Their village is essentially a collection of houses spread over a few hills surrounding a highway connecting East Jerusalem with Israeli settlements in the West Bank. It has no paved roads, no sewage system, no electricity and until recently had no school. Some years back, the local community with international support built a school out of mud and tires.

To the east and south of Khan al-Ahmar, are the two Israeli settlements that look nothing like it. Israeli settlers have reaped the fruits of occupation, erecting prosperous settlements supplied with all utilities and comforts. They look like cities, always well-lit and clean, with well-functioning sewage and running water; they have several schools, clinics and of course security provided by the Israeli army.

The residents of Khan al-Ahmar have been denied access to any of the services their Israeli neighbours enjoy. Their children can’t go to their schools, and before the construction of the mud school, they had to walk several kilometres to get an education.

Since the village started resisting attempts by the Israeli state to push them out of their land, it has become a heavily policed community.

On Wednesday it was both men and women who were beaten by Israeli soldiers in front of their children.

Twelve-year-old Jibril Jahalin tried to recount the violence, his voice cracking behind a laughter that was more forced than genuine. “They kept hitting everyone,” he told me. Later that night, his cousin – Mohammad Jahalin, 14, stayed up making tea for the activists who had come to support the community and were staying overnight.

As he was boiling the water he said to me, “You know, I try not to be afraid, but I don’t know what will happen to us. Where will we go, what will we do? I am afraid”. And like Jibril, he, too, tried to laugh off his fear.

Khan al-Ahmar is not the only Bedouin community that is facing decimation by the Israeli state. The Bedouin way of life and traditions are under grave threat. After the colonisation and militarisation of Palestinian lands, which put an end to freedom of movement for Bedouins and Palestinians in general, Palestinian Bedouin communities were forced to settle down and today, they face a systematic campaign of expulsion.

Between 2008 and 2014, some 6,000 Bedouins were forcefully displaced in Area C after the Israeli state razed their homes. Just last year, the Bedouin village of al-Araqib was destroyed for the 119th time by Israeli forces even though its residents carry Israeli citizenship.

After the raid on Khan al-Ahmar by the Israeli military last week, an Israeli court placed a temporary freeze on the demolition order to “investigate” the ownership of the land. But Israeli courts have proved many times in the last decades that they work to preserve the Israeli colonial project.

The story of Khan al-Ahmar is just one example of the systemic and illegal forced displacement and replacement of Palestinians with Israelis across Palestine. Palestinians are being displaced by a variety of calculated Israeli policies.

In Jerusalem, residents face the revocation of their Jerusalem IDs and residency if they are found to be “disloyal” to the state of Israel. In the West Bank, in 2016 alone, Israel utilised discriminatory practices to displace 1,283 Palestinians from their homes.

In Gaza, the Israeli 11-year-old siege has made many Palestinians want to seek a better life outside the strip – some hopping on boats with Syrian refugees trying to cross the Mediterranean into Europe.

Since Trump took office, an emboldened Israel has approved more than 14,000 additional settlement units in the West Bank.

Just hours after the violence on Wednesday, 12-year-old Jibril held on tight to his Palestinian flag and told me, “We are strong. We will fight [the Israeli forces].” He then looked at the ground and added, “but really, I just want to play.”

Palestinians have the right to live in dignity and justice. Palestinian children have the right to a normal childhood. And we will continue to struggle so that perhaps the next generation of Palestinian children do not have to worry about losing their homes and having no education, so they do not have to wave flags at protests, inhale gas, be beaten and imprisoned under a merciless occupation.

We will continue to stand with the residents of Khan al-Ahmar because their resistance is part of the greater struggle against the entire framework of Israel’s brutal settler-colonialism.

Mariam Barghouti is a Palestinian American writer based in Ramallah.