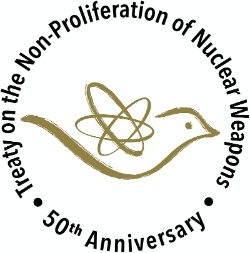 50 years ago on July 1, 1968 the Nuclear Non-Proliferation Treaty (NPT) was signed. This landmark nuclear arms control treaty brought the world’s nuclear powers together with the ultimate goal of eliminating nuclear weapons by engaging in good faith efforts toward that end. Unfortunately, there was no enforcement mechanism. The Treaty also had a “grand bargain” that allowed nations to pursue the “peaceful” use of the atom for nuclear power, medical and scientific research.

This bargain resulted in the continued proliferation and development of nuclear weapons programs in North Korea, India, Pakistan and Israel—each of whom went on to develop their own nuclear arsenals, and Iran pursued a nuclear program that was halted by the Iranian nuclear deal, now in jeopardy due to Trump’s unilateral withdrawal.

Ignoring the good faith Article VI of the NPT Treaty, which mandates that the nuclear weapons states dismantle theirs, the US/Russian arms race continued, almost doubling, until the ultimate passage of the Start I Treaty in 1991 after a decade of negotiations. The reductions in nuclear arsenals continued thereafter until the past decade where they have slowed dramatically. Now it’s reversed; a new arms race is under way in direct violation of the intent of the Treaty. There continue to exist approximately 14,455 warheads as of early 2018.

As part of the Treaty a review process was put in place every five years. The NPT treaty was signed into perpetuity in 1995 having been in force for 25 years.

The following year in 1996, climate scientist Alan Robock and atmospheric and oceanic studies professor Brian Toon and their colleagues presented scientific data on the atmospheric and climatic effects of a limited regional nuclear war between India and Pakistan using half of their arsenals representing less than ½ percent of the global nuclear arsenals. It was estimated this limited nuclear war would drop surface temperature 1.3°C across the planet. The effects on the central agricultural growing regions of the major continents would be far greater resulting in a significant shortening of growing seasons. Subsequent studies on global food production by Physicians for Social Responsibility (PSR) and its international affiliate, The International Physicians for the Prevention of Nuclear War (IPPNW) identified that more than two billion people would be at mortal risk from “nuclear famine” as a result of this catastrophic climate change.

This science was beginning to become clear at the 2010 NPT Review Conference. At that conference, the International Campaign for the Abolition of Nuclear Weapons (ICAN), launched by IPPNW in 2007, recognizing the humanitarian consequences of nuclear war and the inertia by the nuclear arms states to move toward nuclear abolition in earnest, pushed for a nuclear weapons convention that would ban nuclear weapons just as every other weapon of mass destruction had been banned before.

From that point forward ICAN helped to spearhead and coordinate the efforts of the non-nuclear nations, civil society and international NGO community in a focused movement to educate on the humanitarian consequences of nuclear war and to develop the political will for a treaty on the prohibition of nuclear weapons. Three international meetings followed. These occurred in Oslo, Norway in March 2013 with 130 nations represented. Subsequently a meeting was held in Nayarit, Mexico in February 2014 with 146 nations represented, with a third meeting in Vienna, Austria in December 2014 with 158 nations represented. Out of this arose the humanitarian pledge to work toward the complete abolition of nuclear weapons.

This laser-focused effort ultimately resulted in last summer‘s Treaty on the Prohibition of Nuclear Weapons (TPNW) signed by 122 nations. This new treaty prohibits nations from developing, testing, producing, manufacturing, transferring, possessing, stockpiling, using or threatening to use nuclear weapons, or allowing nuclear weapons to be stationed on their territory. Presently 58 nations have signed the treaty with 10 nations ratifying it. Once ratified by 50 nations the treaty will enter into force. ICAN is now focusing its work on lobbying the necessary nations for Treaty ratification.

Once ratified the TPNW will fill the legal gap in the NPT Treaty necessary to abolish nuclear weapons. In addition to the work of ICAN, there is much that is going on in the United States and around the world to abolish these weapons and prevent their use either by intent, miscalculation or accident.

A rapidly growing coalition of cities, organizations and individuals has supported a call to prevent nuclear war and move back from the brink. More than 150 organizations have endorsed this  “Back From The Brink” call upon the United States to lead a global effort to prevent nuclear war by 1) Renouncing the option of using nuclear weapons first, 2) Ending the sole unchecked authority of any U.S. president to launch a nuclear attack, (3) Taking US nuclear weapons off hair trigger alert, (4) Canceling the plan to replace its entire nuclear arsenal with “enhanced” nuclear weapons and, (5) Endorsing the Treaty on the Prohibition of Nuclear Weapons while actively pursuing a verifiable agreement among nuclear arms states to eliminate their nuclear arsenals. In addition, financial divestment of nuclear weapons is an important piece toward the elimination of these weapons and stigmatizing those companies that manufacture and/or fund their production. An international campaign that is coordinating this effort is at “Don’t Bank On The Bomb” and can be used by anyone to investigate whether they are unknowingly complicit in the continued existence of nuclear weapons.

The NPT will ultimately only be successful when leaders have the political will for change or potentially by the unpredictable impulses of leaders. As the US and Russia hold their “great” summit this month, it is the people of the world held hostage by these weapons who must demand their abolition.

Robert F. Dodge, M.D., serves on the boards of the Nuclear Age Peace Foundation, Beyond War, Physicians for Social Responsibility Los Angeles, and Citizens for Peaceful Resolutions, and writes for PeaceVoice.

Anticopyright: Editorials and articles originated on TMS may be freely reprinted, disseminated, translated and used as background material, provided an acknowledgement and link to the source, TMS: The Nuclear Non-Proliferation Treaty at 50: Awaiting Good Faith, is included. Thank you.

One Response to “The Nuclear Non-Proliferation Treaty at 50: Awaiting Good Faith”