Why Unarmed Civilian Protection Is the Best Path to Sustainable Peace 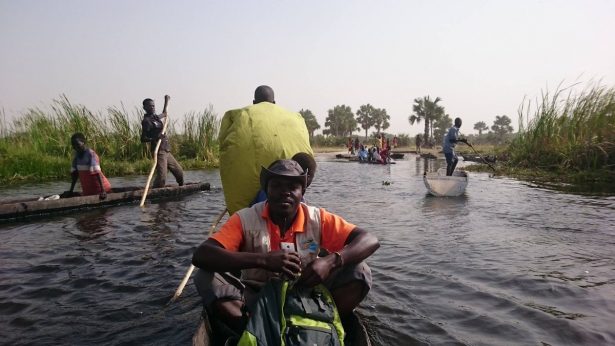 6 Jul 2018 – The first image that often comes to mind when one thinks of peacekeeping, especially within the frame of the United Nations, is that of the blue helmets: armed soldiers gathered from member states who are then strategically deployed in conflict areas.

There are over 90,000 armed UN peacekeepers working around the world today — from Haiti to Lebanon to Kosovo to Darfur — who are generally isolated from the communities they are meant to protect. They engage from the outside, with soldiers often patrolling in vehicles and retreating at the end of the day to compounds of rarefied security.

This drastically reduces the ability of traditional peacekeepers to know and respect local people; without this understanding, trust is weakened and the kind of clear and open communication needed for sustained peace is undermined. A recent UN report exploring ways to improve the safety of UN peacekeepers embodies this relationship model: its focus is on the protection of peacekeepers who come from outside countries and concludes that their safety depends on the proactive use of force.

There is, however, another model for peacekeeping called unarmed civilian protection, or UCP. It works from the inside and has been proven to save lives, empower communities and can secure strong and lasting peace in areas plagued by violent conflict.

“Unarmed civilian protection challenges the widespread assumption that ‘where there is violence we need soldiers,’ or that armed actors will only yield to violent threat,” said Rachel Julian, director of the Centre for Applied Social Research at Leeds-Beckett University, during a UN event in May. Hosted by the permanent missions of Uruguay and Australia to the UN, the event offered inspiring success stories and provided persuasive evidence that unarmed civilian protection works.

UCP, she began, is not a new-fangled and untested method of peacekeeping — in its current form, it has been around for over 35 years. Despite its long history, UCP is rarely recognized by international bodies as a viable tool for peacekeeping; armed strategies tend to dominate institutional efforts to combat threats of violence. Julian’s research suggests that we have much to gain by expanding our conception of what peacekeeping is and by broadening our ideas of the methods it involves.

Julian explained that armed peacekeeping is limited in part due to the fact that the peace sought by armed peacekeepers is not grounded in the knowledge, practices and traditions of the people directly involved in the conflict. Armed peacekeeping imposes peace externally, introducing temporary resolutions from the outside. It is often implemented according to a fixed and prescribed model that is applied with relative uniformity in different regions and in all kinds of conflict.

As Youssef Mahmoud from the International Peace Institute said at the event, this kind of peacekeeping can yield “security, not safety.” And no doubt, security is important. But more important is a sustainable peace that finds its roots in the particular community itself. These local approaches to peace are always present, even amidst horrific violence.

Unarmed civilian protection draws on the peace infrastructure that exists within all communities by actively listening to everyone involved, by opening clear lines of communication, and by making a safe space for people to use and build on the knowledge and resources they already have. UCP is based on the recognition that each conflict and thus each peace is distinct and requires methods that are adapted to the particularities of the community and implemented by local people themselves.

Over the years, Julian has gathered a tremendous amount of data to prove the efficacy of UCP. Her research shows that unarmed civilian protection is scalable, that it is successful in preventing violence, that it works in all stages of conflict and that it is effective in preventing the displacement of civilians.

But the benefits that grow directly from the practices of unarmed civilian protection require time and funding, which they currently lack. Building trust and capacities, strengthening community ties, encouraging communication among “enemies” are not cheap and quick fixes. However, the investment pays off: the peace UCP ushers in tends to be strong and enduring. After all, its roots lie deep in the individual communities and in the hearts of its residents. 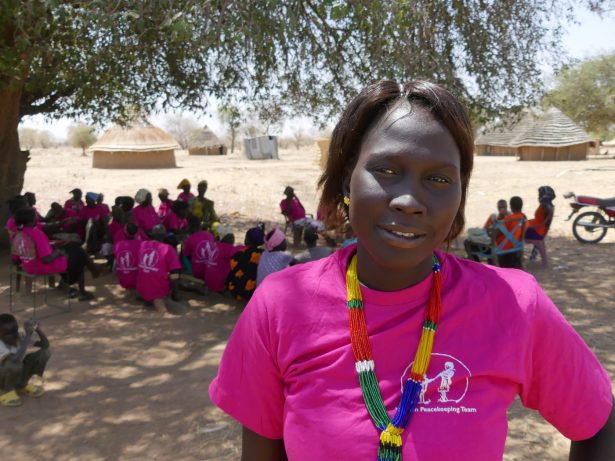 In the Kook community of South Sudan, strong local women came together to form the Women’s Peacekeeping Teams, which pooled their strength and knowledge to take action for peace. These teams were able to sustain peace among once hostile clans when it was threatened after a chief’s son was killed. Because the Women’s Peacekeeping Teams had laid the groundwork by taking the time to get to know and listen to people from all groups in the area, they were able to intervene on behalf of their community as a whole and ensured that no revenge killings would take place. And indeed, the peace remained.

Carmen Lauzon-Gatmaytan is the program development officer with Nonviolent Peaceforce, an unarmed, paid civilian protection force founded in 2002, which now has peacekeepers in the Philippines, Iraq, South Sudan, Bangladesh and Myanmar. An international NGO, Nonviolent Peaceforce is committed to “building peace side by side with local communities” in a way that saves lives and preserves human dignity.

Lauzon-Gatmaytan works in Mindanao region of the Philippines, which has emerged as an epicenter of violence in the country. Unarmed civilian protection has been effective in countering this violence, creating reliable channels of communication among opposing groups and cultivating islands of peace where conflict seemed inevitable. Local actors have been empowered through trainings in the methods of unarmed civilian protection, and trust among ostensible enemies is gradually emerging and taking hold. This has come in part by identifying common interests which unite rival groups, despite disagreement on the issues that drive the conflict.

A few years ago, a high school graduation celebration was disrupted by armed militias. Parents and students contacted Nonviolent Peaceforce to come work with their community, providing protective accompaniment to vulnerable people and encouraging dialogue among all parties. The following year, the graduates took part in a ceremony free of tension and fear. Families — whatever their political, religious and ethnic ties — recognized and respected the desire to watch their loved ones receive diplomas. 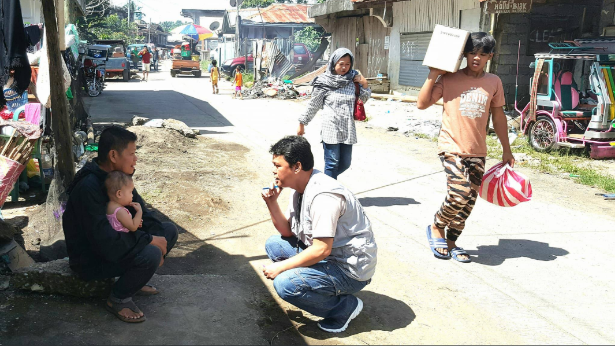 NP was on the ground in the Philippines conducting monitoring patrols and addressing civilian concerns when they returned to their communities more than six months after fleeing from fighting between armed groups.
(Twitter/Nonviolent Peaceforce)

Building bridges among opposing groups reveals only one axis of UCP’s impact, which cultivates trust and strengthens ties among civilians. Equally significant, Lauzon-Gatmaytan insisted, is how UCP facilitates the coming together of civilians, government officials and armed actors to work for peace. This was witnessed in Mindanao when both the government and the main rebel group, the Moro Islamic Liberation Front, requested that Nonviolent Peaceforce join in the official ceasefire and recognized unarmed civilian protection as a tool to be used to find resolution to the region’s problems.

Yasmin Maydhane, an international protection officer with Nonviolent Peaceforce, has direct experience using unarmed civilian protection in remote areas of South Sudan that are inaccessible to the UN mission there. Her work has introduced her to local people whose knowledge and resources have been channeled and directed so that they are now active unarmed peacekeepers themselves.

Herself a byproduct of UN peacekeeping missions in Somalia, Maydhane has firsthand knowledge of what works and what doesn’t, and UCP, she stated without equivocation, works. She spoke with pride and excitement about the fact that UCP methods have inspired local youth to be increasingly involved in peacekeeping efforts in South Sudan, forming youth groups of motivated peace activists. The Upper Nile region, long cut off from aid of all kinds, now has basic humanitarian services thanks to UCP.

Perhaps most significant, women are leading some of the most successful peacekeeping efforts in the area. In one instance, they managed to bring together representatives from different ethnic groups to ensure safe passage through a once perilous series of checkpoints: Maydhane described how before these brave women joined forces, going through checkpoints meant abuse and rape. They declared, “Our men rape you, yours rape us — let’s end this” and South Sudanese women did just that. The checkpoints are now safely crossed.

At the event, Mahmoud said the efficacy of unarmed civilian protection comes in part from its adaptability and flexibility. This gives it a unique capacity to contend successfully with decentralized violence, a characteristic of most active conflicts in the world today. Equally important, unarmed civilian protection makes room for local actors to realize capacities that have become latent, and any good peacekeeper, he said, must draw on this untapped potential.

Peacekeepers must be sure to “map not only what is not working, but also what is working” — that is, to understand that the solutions to any conflict lie with the local people. This means that the aim of unarmed civilian protectors is ultimately to become dispensable — somewhat paradoxically, they must strive to be unneeded. In this, unarmed civilian protection goes beyond mere protecting, but supports local actors to build peace themselves. Real peace, Mahmoud stressed, always grows from the bottom up and while external actors can help make the space for peace, they must leave room for others “to shape it as their own.”

The UN event made clear that unarmed civilian protection is not simply about keeping peace, it is inseparable from building peace, which necessarily involves unearthing and realizing the capacity, knowledge and power of the communities that are directly involved in conflict. The kind of local ownership UCP depends on is essential for a robust and sustained peace as opposed to a fleeting and fragile one. Much of traditional peacekeeping has been pried from its natural place within grassroots peacebuilding, reduced to an external force that strains to impose a frozen peace from the outside and is itself dependent on outsiders.

The practices central to UCP — inclusive dialogue, protective accompaniment, trust-building and open negotiation — grow directly out of the awareness that local capacity is never absent, only buried and rendered dormant under the weight of conflict and violence. These are all too often the direct result of external forces — colonialism, proxy wars, scarce resources, climate change — for which those stuck in conflict bear no responsibility.

Nonviolent peacekeeping allows people to see humanity visibly manifested; unarmed peacekeepers must be decent and kind, they must listen actively and make all parties to a conflict feel as though they matter. In doing so, humanity is revealed to be not the property of one side or another, nor something that must be imported from outside.

Unarmed civilian protection directly addresses the urgent need to ensure that even the most violent regions across the globe are on a road to becoming safe and peaceful. Given increased international recognition and adequate financial support, data suggests that such widespread peace is in fact possible and sustainable.

Equally significant, this peace does not require the constant presence of saviors from outside, whether UN blue helmets or others. “Outsiders have to be humble enough to recognize that people have capacity not just needs,” Mahmoud said. “Outsiders also have to build into their DNA that they are dispensable.”

Annie Hewitt received her PhD from the Government Department of the London School of Economics and has taught political theory in London, New York and Rome.