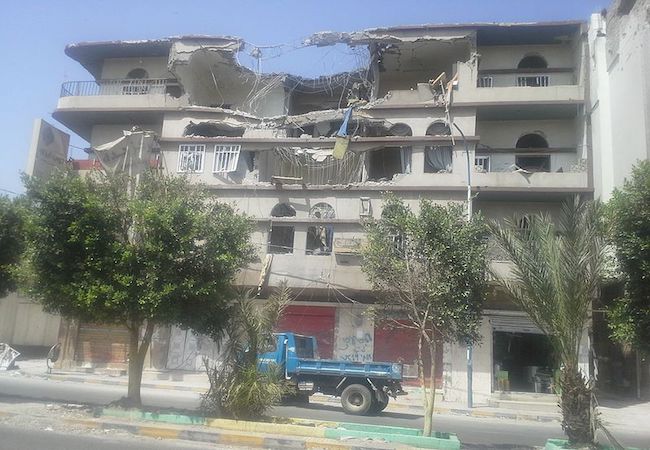 29 Jun 2018 – A 27 June 2018 meeting of United Nations Secretariat and government experts on Yemen from a number of countries in Paris again called attention to the deep humanitarian crisis in Yemen as Saudi coalition forces attacked the port city of Hadeida into which normally comes over 70 per cent of food and medical supplies of the UN and non*governmental relief agencies for the Yemeni population.  The port is currently closed due to the fighting, and many of the humanitarian organizations have pulled out their staff for their safety.

Although all participants were aware that a political compromise to end the armed conflict is necessary, no advances seem to have been made on that score. Crucial actors such as Iran and the  Houthi leaders were not invited to Paris, thus the meeting seemed to favor Saudi aggression.

The Saudi and its United Arab Emirate allies have launched on 13 June an attack which continues on the Red Sea port of Hodeidah.  Hodeidah is a city of some 600,000 people, some of whom are recent residents displaced by fighting in other parts of Yemen.

The population of Hodeidah faces a wide-spread wave of cholera, lack of medical supplies, lack of food and clean water. The situation grows worse by the day as heavy bombardments by the Saudi air force continues to destroy what civilian infrastructure still exists.

The United Nations Security Council has been discussing the situation in both public and private meetings without any visible impact. The new U.N. envoy to Yemen, Martin Griffith, first suggested that an international team or a third party could assume the administration of the city.  As that suggestion fell on “deaf ears”, he then proposed the obvious: a ceasefire between the Saudi and United Arab Emirate forces and those of Ansar Allah, more commonly called the Huthis.  This suggestion also fell on deaf ears, and the fighting continues.

The only people who profit from the fighting, in the literal sense, are the mercenaries, US and Australian at the higher levels of the Saudi and United Arab Emerite forces and Sudanese at the lower level.

There have been discussions in the United Nations since the 1960s when European mercenaries were active in the conflicts in the former Belgium Congo if there could be ways to stop or limit the use of mercenaries. These discussions also fell on deaf ears. In practice, though less often called mercenaries today, the practice has grown and is likely to continue growing.

The Yemen conflict can become  even more complicated.  Iran has just sent two war ships, a helicopter carrier and a destroyer, toward the area. It is not enough to lift the Saudi blockade, but war ships have a habit of inviting trouble.

The Saudi Arabian leadership had expected a quick victory when in March 2015 they launched their operation at the time called “Decisive Storm”. Despite limitless weapons from the USA and Great Britain, including the use of U.S.-made cluster weapons now banned by world law, the Saudi-led coalition made relatively few territorial gains beyond those tribal areas within Yemen that were already favorable to the Saudis, tribes that often existed on both sides of the frontier.

Both Saudi Arabia and Iran have been backing separate and opposing factions.  The lack of progress as well as the costs of the military operations may create a climate favorable to stopping the fighting.  However, Saudi Arabia and its coalition are directly involved in the fighting while Iran only supplies some weapons and political support to its allies.  Thus, of the outside actors, most responsibility for a change lies with the Saudi decision-makers.

There are two major issues that shape the future.  The first is the possibility or not of forming a decentralized but relatively inclusive central government.  Yemen remains largely a tribal society with political decisions made by the tribal head. Tribes usually have a specific geographic base. Thus a central government requires participation by members from the major tribal groups. However, through economic development, people from different tribes now live in the cities and larger towns. These more urbanized populations do not depend  as much on the decisions or views of tribal chiefs.

The relative strength of the central government has been based on patronage strategies, offering major tribal leaders some economic advantages.  Until  March 2011, most people had little say as to government policy.  In March 2011, in the spirit of the “Arab Spring”,  there were popular demonstrations throughout the country demanding jobs, the end of corruption  and some respect for all citizens.  By the end of 2011 Ali Abdullah Saleh, who had been in power for 33 years, was pushed out and replaced by his vice- president Abdu Rabbu Mansur Hadi who has the same governing style but who was considered as a change without upsetting too much the governing pattern.

Saleh, however, never really accepted the idea of giving up power and its material benefits.  He formed an alliance with a religious movement that drew its members from the same geographic region.  Saleh had combated this Huthi movement, including by force of arms, when he was president.  But for a time the alliance seemed to be mutually beneficial. The alliance broke sharply this November. 2017.  Fighting among the Huthi forces and those loyal to Saleh broke out in the capital Sana’a in November and on 4 December, Huthi troops shot Saleh in his auto as he was trying to leave the city.

The second major issue concerns the ability of Yemen to remain as one State or again to split into two with Sana’a as the capital of one State in the north and Aden as the capital of another State in the south.  The two States were the political structure until 1990 when the People’s Democratic Republic of Yemen, with its center in Aden, combined with the Yemen Arab Republic in the north to become the Republic of Yemen.  Leading up to 1990, there was wide hope that the union of the two States would lead to increased economic well being.  In practice, there has been little improvement. If there has been an improvement, it is because of external economic factors and not directly linked to the union.  The lack of improvement in the south has led to resentment in the south and on the part of some persons, a desire for southern separation.  Now, some in the south have formed militias. It is difficult to know how far they will push for separation and the creation of an independent State. Already in 1994, there had been armed attacks to push for a return to an Aden-based State.

The Association of World Citizens has been concerned with three issues in the Yemen conflict:

Today, the choice between an end to the armed conflict with negotiations for a renewal of a Yemeni State on the basis of the con-federal system proposed and continued fighting in the hope that one faction become a “winner-take-all” is relatively clear.  The Association of World Citizens is resolutely for an end to the armed conflict with serious negotiations on the structure of a future State.