At 20:06 (CEST) we lost contact with the yacht Freedom, sailing under a Swedish flag, which is on a mission to break the illegal Israeli blockade of the Palestinian people of Gaza. We have reason to presume that the Israeli Occupation Forces has now begun to attack it and that it has been surrounded in International Waters. The latest reported position was approximately 40 nautical miles from the coast of Gaza.

Based on what happened on Sunday, we anticipate that the Israeli Occupation Forces has now cut all communications with Freedom, so it can begin an undocumented attack.

Freedom is a gift for the Palestinian fishers of Gaza and is carrying a cargo of medical supplies, including #Gauze4Gaza. On board are 10 participants and two journalists from five countries. Details of all of the participants are here.  The last news that we had from Freedom was that she was maintaining her course towards Gaza and the ‘conscience of humanity’.

The Israeli Occupation Forces claims that our civilian boats – including our 100% wind-powered boat – are breaking international law and threatens that they will use ‘any measures necessary’ to stop us. We assert the right of ‘innocent passage’ guaranteed under the UN Convention on the Law of the Sea 1982 and call upon international authorities to protect our small yacht. The only ‘necessary measures’ are to end the illegal blockade of Gaza and to restore freedom of movement for all Palestinians. 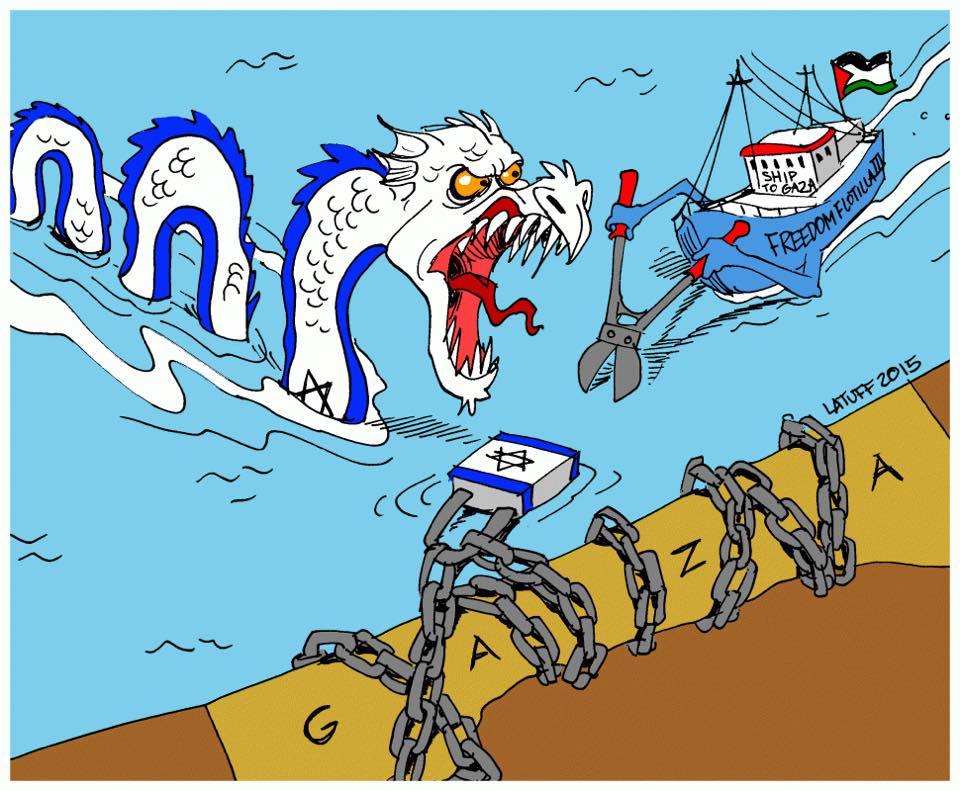 Last Sunday, the Israeli Occupation Forces cut all communications and then violently attacked our lead boat (‘Al Awda) in international waters, pulled down its Norwegian flag and trampled upon it. According to many testimonies that we have, including Yonatan Shapira, a former Israeli Air Force officer who was a participant aboard ‘Al Awda’, they then beat up and tasered several people and stole most of the participants’ property.

Four boats left Scandinavia in mid-May and have since stopped in 28 ports building support for a ‘Just Future for Palestine’. We demand that Israel ends its ongoing breaches of international law, including the collective punishment of a twelve-year blockade of Gaza, thereby enabling the only closed port in the Mediterranean to open and that people have their universal right to freedom of movement.

“The Freedom Flotilla Coalition calls on the Swedish Government, the national governments of those aboard Freedom, other national governments, and relevant international organizations to act immediately.” said Dror Feiler of Ship to Gaza Sweden, part of the Freedom Flotilla Coalition. “We demand that the Israeli Occupation Forces not interfere with our unarmed yacht, as we continue our voyage to Gaza to deliver our gift of much-needed medical supplies”.

More information about the ‘Right to a Just Future for Palestine’ flotilla and the FFC:

To arrange an interview or for more information, contact: jfp.freedomflotilla.org/media-room-2