Is India Creating Its Own Rohingya?

Echoes of the majoritarian rhetoric preceding the ethnic cleansing of the Rohingya can be heard in India as four million, mostly Bengali-origin Muslims, have been effectively turned stateless. 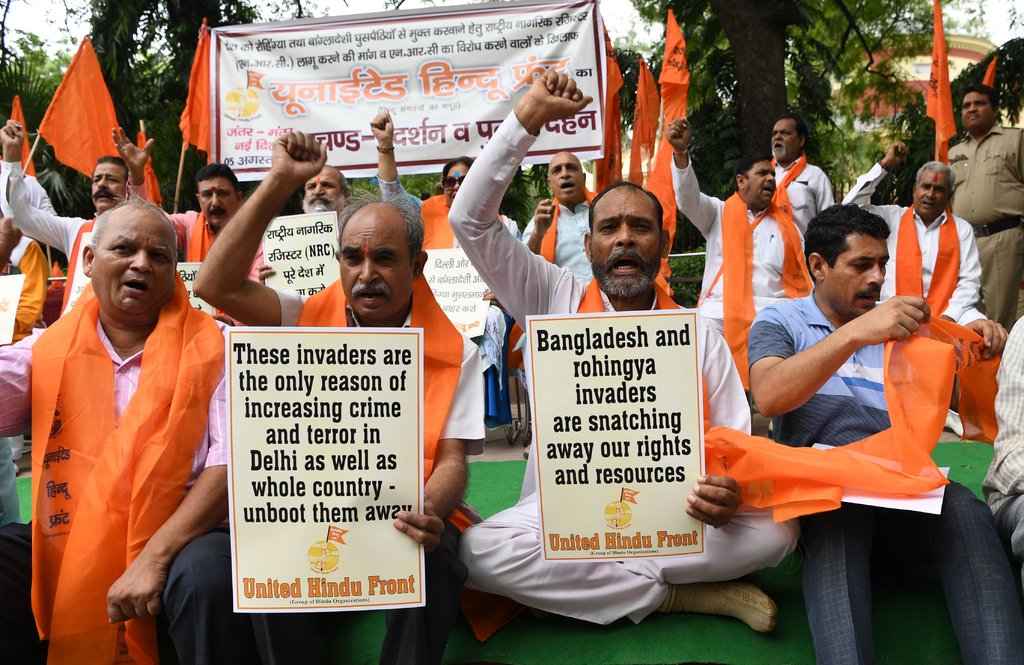 10 Aug 2018 — On July 30, four million residents of the Indian state of Assam were effectively stripped of their nationality after their names were excluded from the recently formed National Register of Citizens.

Indian authorities claim to have initiated and executed the process to identify illegal immigrants from Bangladesh, which shares several hundred miles of its border with Assam, but it has exacerbated fears of a witch hunt against the Bengali-origin Muslim minority in the state.

Assam is the most populous of India’s northeastern states. As part of a labyrinthine bureaucratic exercise, 32.9 million people and 65 million documents were screened over five years at a cost of $178 million to ascertain which residents of Assam are citizens. The bureaucrats running the National Register of Citizens accepted 28.9 million claims to Indian citizenship and rejected four million.

The idea of such screening to determine citizenship goes back to the aftermath of the 1947 Partition of British India into India and Pakistan. A register of citizens set up in Assam in 1951 was never effectively implemented. Twenty-four years after the Partition, the mostly Bengali Eastern Pakistan seceded from Western Pakistan with Indian military help, and Bangladesh was formed on March 24, 1971. The brutal war that accompanied the formation of Bangladesh had sent millions of refugees into the Indian states of Assam and West Bengal.

Politics over illegal migration from Bangladesh into Assam has been a potent force in the politics of the state for decades. In 2008, an Assam-based NGO approached the Supreme Court of India claiming that 4.1 million illegal immigrants had been registered as voters in the state. In 2014, the Supreme Court ordered the federal government to update the National Register of Citizens.

The updated list defines as Indian citizens the residents of Assam who were present in the state before March 25, 1971, and their direct descendants. In keeping with this criterion, the N.R.C. asked for certain legal documents to be submitted as proof of citizenship — including the voter lists for all Indian elections up to 1971.

People born after 1971 could submit documents that link them to parents or grandparents who possessed the primary documents. So each person going through the process had to show a link to a name on the 1951 register and the only two voter lists — those of 1965-66 and 1970-71 — that were ever made public.

Such criteria, applied across India, left a good percentage of its citizens stateless. Front pages of Indian newspapers have been carrying accounts detailing the absurdities in the list — a 6-year-old who has been left out even though his twin is on the list, a 72-year-old woman who is the only one in her family to be left off, a 13-year-old boy whose parents and sisters are on the list but he is not.

The Supreme Court, which had ordered the process underlying the National Register of Citizens, has now directed that no action should be initiated against those left out and that a procedure should be set up for dealing with claims and objections. A final list is expected at the end of an appeal process. And it is not clear what transpires at the end of that process, which is expected to be long and harrowing. So far six overcrowded jails doubling as detention centers in Assam house 1,000 “foreigners,” and the Indian government has approved building of a new detention center that can house 3,000 more.

The N.R.C. may well have set in motion a process that has uncanny parallels with what took place in Myanmar, which also shares a border with Bangladesh. In 1982, a Burmese citizenship law stripped a million Rohingya of the rights they had had since the country’s independence in 1948.

The Rohingya, like a huge number of those affected by the N.R.C. in Assam, are Muslims of Bengali ethnicity. The denial of citizenship, loss of rights and continued hostility against the Rohingya in Myanmar eventually led to the brutal violence and ethnic cleansing of the past few years. The excuses that majoritarian nationalists made in the context of the Rohingya in Myanmar — that outsiders don’t understand the complexity of the problem and don’t appreciate the anxieties and fears of the ethnic majority — are being repeated in Assam.

Ethnic hostilities were most exaggerated when they provided a path to power. Between 1979 and 1985, Assamese ethnonationalist student politicians led a fierce campaign to remove “foreigners” from the state and have their names deleted from voter lists. They contested elections in 1985 and formed the state government in Assam. In the 1980s, the targets were Bengali-origin Muslims and Hindus.

The N.R.C. embodies both the ethnic prejudices of the Assamese majority against those of Bengali origin and the widespread hostility toward Muslims in India. India’s governing Hindu nationalist Bharatiya Janata Party has been quick to seize on the political opportunity provided by the release of the list. The B.J.P. sees India as the natural home of the Hindus.

Prime Minister Narendra Modi has a long history of using rhetoric about Pakistan and Bangladesh to allude to Muslims as a threat. In keeping with the same rhetoric, Mr. Modi’s confidante and the president of the B.J.P., Amit Shah, has insisted that his party is committed to implementing the N.R.C. because it is about the “national security, the security of borders and the citizens of this country.”

India has nowhere to keep the four million people declared stateless if it does not let them continue living their lives. The Indian government has already assured Bangladesh, which is already struggling with the influx of 750,000 Rohingya from Myanmar, that there will be no deportations as a result of the N.R.C. process.

Most of people declared stateless are likely to be barred from voting as well. While the Indian election commission has declared that their removal from the voter’s list will not be automatic, in effect once their citizenship comes into question, they lose their right to vote.

Apart from removing a huge number of voters who were likely to vote against the B.J.P., the party has already shown that as Mr. Modi struggles on the economic front, the N.R.C. will be a handy tool to consolidate Hindu voters in Assam — the majority of the people rendered stateless are Muslims — and the rest of the country going into the general elections in the summer of 2019.

Hartosh Singh Bal, the author of Waters Close Over Us: A Journey Along the Narmada, is the political editor of The Caravan magazine.