Kerala Flood Is Thousands of Times the Magnitude of Thai Cave Rescue! 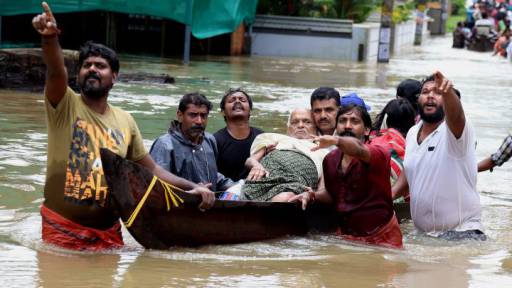 Sadly the momentous Kerala flood is not even national news, not to speak of international news. The Kerala flood is a disaster thousands of times more vast in its magnitude. Tens of thousands of people are stranded in remote areas, in the upper floors of the houses, on trees and even on roof tops. Reports of people dying in their shelters of starvation and disease have started coming out. Dead bodies are floating around in flood waters. And nobody moves.

Places like Ranni, Aranmula, Kozhenchery, Chalakkudy, Varappuzha, Angamaly, North Paravoor, Chengannoor, Pandalam are completely under water. The rains are not letting up. Flood waters keep rising. It is completely beyond the control of the state government to manage the rescue operations.

A press information of bureau press release said 57 Teams of NDRF involving about 1300 personnel and 435 Boats are deployed for search and rescue operations. Five (5) Companies of BSF, CISF and RAF’s have been deployed in the State to carry out rescue and relief measures. A total of 38 helicopters have been deployed for rescue and relief measures. 20 Aircraft are also being used for ferrying resources.

This is way beyond the needed resources and personnel to rescue ten of thousands of stranded people. Hundreds of boats of fishermen are operating in the area. They are also not able to do much. Saji Cheiyan MLA, law maker from Chengannur of Pathanamthitta district warned yesterday that Kerala floods will turn into a calamity of unimaginable proportions if help is not forthcoming. He warned that at least ten thousand people will die from starvation if more rescue teams and supplies are not deployed in the area.

Supplies have started dwindling. Many shops are empty or closed. Food supplies are not coming from outside the state. Soon there could be food shortage and medicine shortage.

More central teams are needed for the rescue operations. It’s incredulous that the third largest military force in the world can’t deploy enough helicopters and personnel to rescue the stranded people. The political difference between left ruling Kerala and the right wing BJP ruled centre should not come in the way of saving the lives of people caught in a natural calamity.

Prime Minister Narendra Modi came to the state last night. He could make an aerial survey of only a few places due to bad weather. In the high level meeting he promised Kerala an additional Rs 500 crore central help. It is in addition to the Rs 100 crore already allotted. This will in no way meet the billions of dollar damages the flood has caused. More importantly he failed to declare it as a ”National Disaster”. If it were declared as a national disaster it would have been much more easier for Kerala to get national and international support.

One thing is clear. The Kerala government and the central government have failed miserably in handling the disaster. It’s time for international community to step in. The support of UN disaster management team should be sought.

A Bangalore based entrepreneur Anuraj Ennai has put forward some solid suggestions:

As the relief efforts are going on full swing for #KeralaFloods few points need to be made:

This is a time for concerted effort. Request Indian government to provide all resources under its command to do effective disaster relief. #Keralafloods #NationalDisaster.

The international community that stood as one to save the Thai kids should wake up to the disaster in Kerala. It is a disaster of several magnitudes in scale.

Binu Mathew is the editor of Countercurrents.

One Response to “Kerala Flood Is Thousands of Times the Magnitude of Thai Cave Rescue!”