The dangers of uncovering stories in Rakhine during a time when so many tales need to be told. 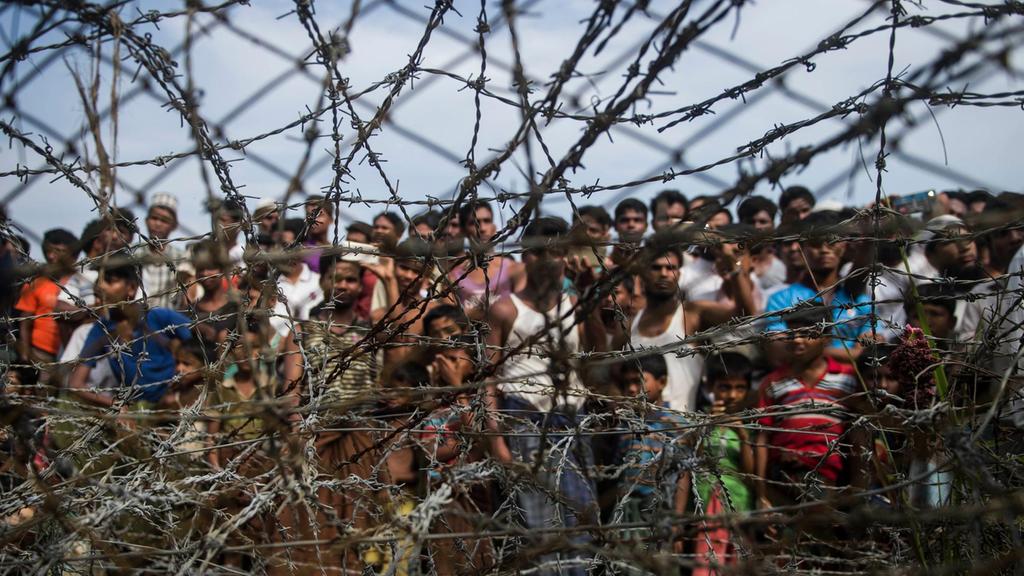 Rohingya refugees in a temporary settlement in Maungdaw, Rakhine, in April. The area is a ‘no man’s land’ border zone between Myanmar and Bangladesh

3 Aug 2018 – While the charred, blood-soaked borderlands of northern Rakhine state are off limits to most outsiders, it’s a place journalist Mratt Kyaw Thu knows only too well.

At the height of the Myanmar military’s campaign of violence against Muslim insurgents and Rohingya civilians last August, the 27-year-old and two colleagues ventured there on a mission to uncover what was happening.

When they reached Maungdaw, a predominantly Muslim city of 400,000 people close to the Bangladeshi border, they found it eerily quiet. They then took a motorbike to outlying villages only to see that the soldiers and security forces had vanished from the area, as had tens of thousands of Rohingya.

Left behind were angry and hostile Rakhine Buddhist mobs; some were drunk. “Rumours spread within the villages that if there is a reporter in the area, it’s OK to kill them,” Thu recalls.

After stopping to interview some locals, a mob quickly formed around the journalists and some called for the reporters to be slayed. Only the presence of a local politician saved Thu and his colleagues, who escaped the district by hiding on the floor of a van.

Bloodthirsty hordes are not the only threat to journalists working in Myanmar today. On Monday [July 16], the trial of Reuters reporters Wa Lone and Kyaw Soe Oo opened after the pair were last week charged under the colonial-era Official Secrets Act. The reporters were investigating the massacre of 10 Rohingya men by security forces and Buddhists civilians in Rakhine state on September 2 last year. They deny illegally possessing government documents, and say the files were handed to them by police officers in a sting operation shortly before their arrest last December. They face up to 14 years in prison if convicted.

Nor is danger limited to those covering events in Rakhine state. In December 2016, investigative journalist Soe Moe Tun was found beaten to death in northern Myanmar. He had been reporting on the illegal logging trade. Others, including Pulitzer-prize-winning Associated Press journalist Esther Htusan, have been forced to leave Myanmar in the wake of death threats made against her for mistakenly translating comments by Aung San Suu Kyi.

Reporters are “being threatened, vilified, thrown in jail, and prosecuted,” says Human Rights Watch, while several journalists face charges of “online defamation” that carry a two-year sentence, according to the Committee to Protect Journalists.

From a rooftop bar in downtown Yangon, one of the few places to escape the city’s suffocating heat, the tall, brooding Thu relays how professional life for journalists is on the slide for many reasons, but that working on the Rohingya issue evokes particular close attention. 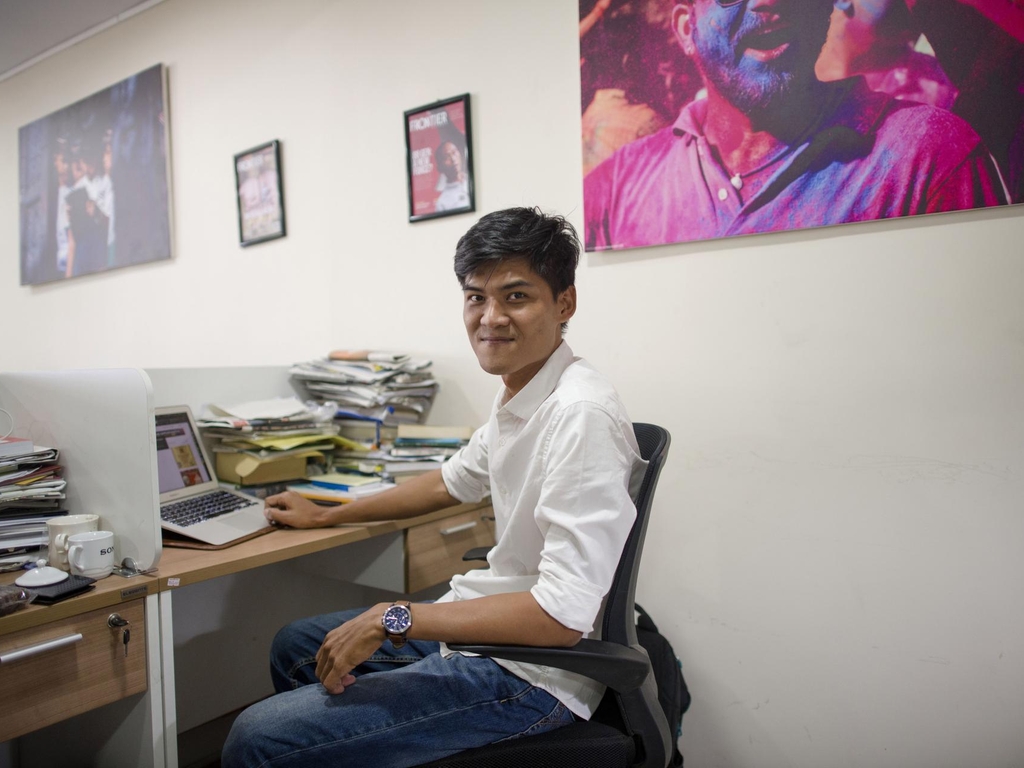 The state-led violence, described by the United Nations as a “textbook example of ethnic cleansing,” has displaced 680,000 Rohingya to Bangladesh since August. Medecins Sans Frontières says that more than 6,700 people were killed by Buddhist civilians and security forces during military “clearance” operations. Systematic rape and torture was widespread.

A native of southern Rakhine state, Thu’s local background and knowledge has since allowed him to return, crossing security checkpoints by posing as an ordinary citizen. “The most dangerous thing is (that) local people in Rakhine understand (from) some military and police officials that they are allowed to kill someone if they come with a camera,” he says. “Of course, it’s not an official statement but that’s what is understood.” Thu’s bravery under extreme duress saw his work in the magazine Frontier Myanmar awarded the AFP’s Kate Webb Prize, which he dedicated to his imprisoned colleagues.

Myanmar was once a place where journalists lived in nascent hope.

After the ruling military moved to enact democratic changes in 2010, a flood of new media outlets opened, from colourful lifestyle pamphlets to political investigations magazines. For decades a pariah state, Myanmar’s young, literate population was hungry for information about the huge changes taking place in their own country and from the wider world. Nineteen publications opened between 2012 and 2014 alone, according to Myanmar Times, while once-exiled writers and news outlets returned to live and operate from Yangon. As recently as February, five private companies were granted broadcasting licences.

But as the reaction to the Rohingya tragedy has made clear, press freedoms are once again being reigned in.

At the same time, misinformation spread via pictures and posts on Facebook have led to people becoming less trusting of the media. Rumours abound that journalists working on the crisis are being paid by foreign Islamic groups. After Kyaw Lin, a local reporter from Rakhine state was stabbed twice on December 20 last, an anonymous poster threatened on his Facebook page: “You may live this time, but won’t next time.” 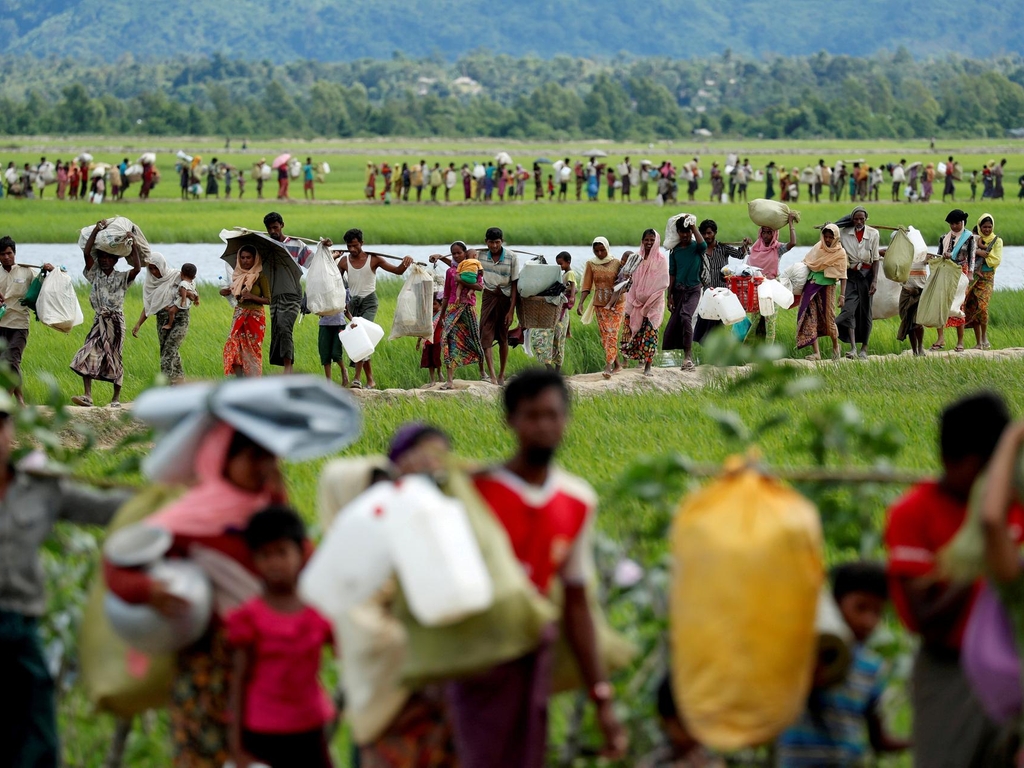 Security organisations have tapped the wide reach that social media sites hold in Burmese society – even the armed forces commander-in-chief makes his announcements on Facebook – to present their own version of reality, none more so than with regard to events in Rakhine state. The scourge of government propaganda has returned. In February, the state-run Global New Light of Myanmar seized on a New York Times article about Rohingya refugees who gave false testimonies to international media.

Even journalists attempting to get around state-imposed restrictions by leaving Myanmar to report on the Rohingya refugee calamity have been stumped: Last September, two Myanmar photographers on assignment for the German GEO magazine were detained in Bangladesh on apparent visa infringements.

The polarised atmosphere has left many downbeat. “Before 2015, when we introduced ourselves as journalists in our daily work, we were respected. We could see the impact of our stories,” Thu, who only writes in English, laments. “Now, journalists don’t even want to say what they are. The public just don’t care, and I’m really upset about that.”

Reporters are not helped by the fact that their average salary amounts to around $300 (Dh1,100) a month (minimum wage in Myanmar is $100). Thu even says he’s thinking about giving up journalism as he feels his and others’ investigative work no longer matters to the public.

Sometimes it is the international press that contribute to the risk he faces. When Thu found himself in Maungdaw in October 2016 amidst clashes involving Muslim insurgents and soldiers that killed nine police officers and seven civilians, his phone rang off the hook. “Many international news agencies contacted me looking for information. I told them many things but asked that they don’t use my name,” he says. One journalist from a major American newspaper didn’t comply. “The next morning, officials from the regional and national government called me, they were furious. It put me in a lot of danger,” he says. 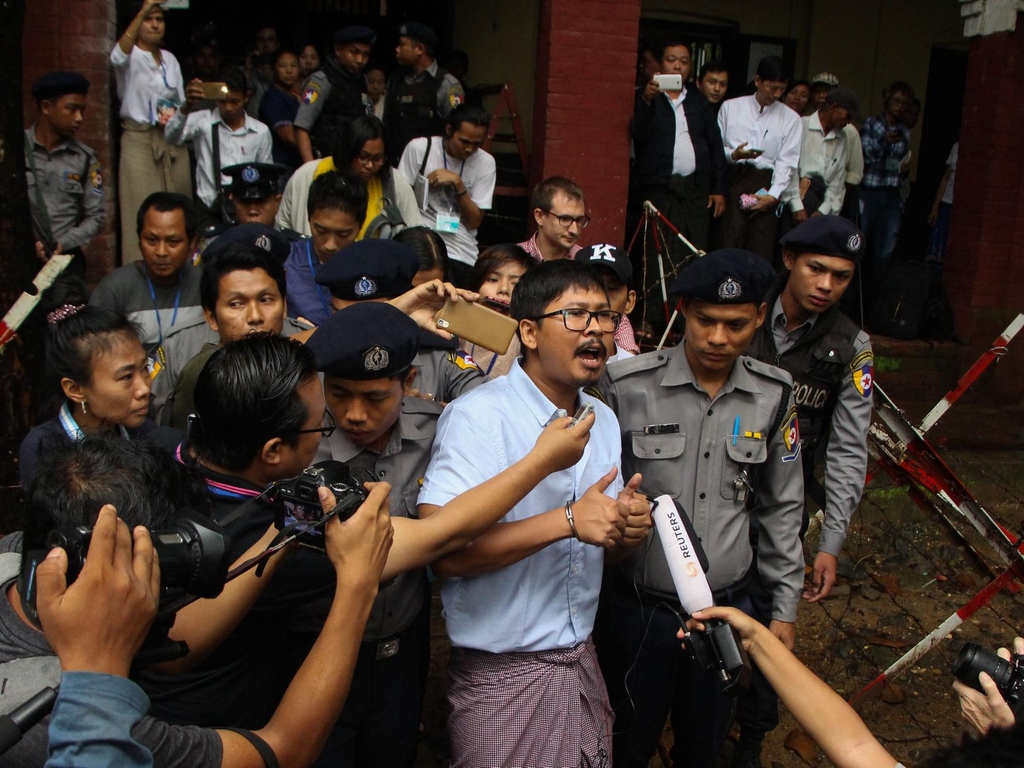 Despite that, his close brush with the baying crowd last August and the regular phone calls of warning from the police, Thu carries on. With independent international journalists unable to reach northern Rakhine state without government minders in tow, responsibility for finding out the every-day and incidents that can incite or calm intercommunal strife there now squarely falls on the shoulders of journalists such as Thu. In January he returned, visiting destroyed and depopulated Muslim villages, and reporting on how the government had taken over valuable rice harvests that were abandoned by the fleeing Rohingya. “You are afraid of the checkpoints, but I went there as a local person, and because some local administrators know me, I had some cover,” he says. In Maungdaw he saw that life had returned to the city, and even several Muslim stores were opened. Historical and unique local dynamics in this border region, he says, mean the conflict is far more complicated than is often portrayed. “That’s why I go back there,” he says. “I have to see this, with my own eyes.” 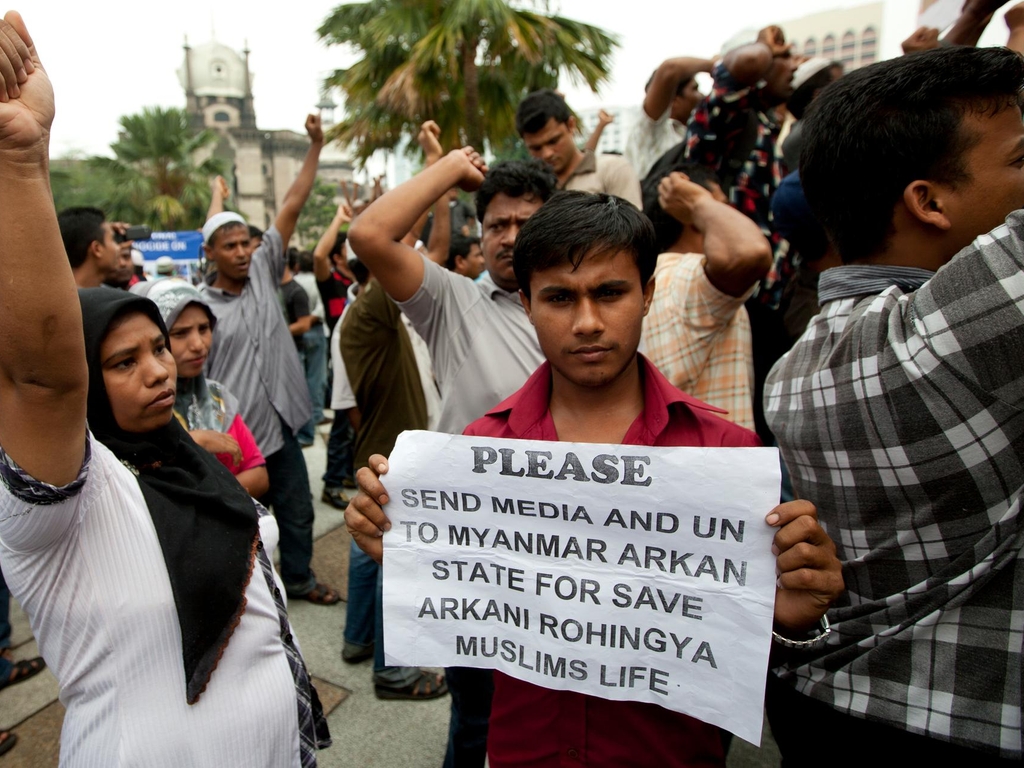 In a protest Rohingya people living in Malaysia demonstrate against the clashes between Buddhist Rakhine and the Muslim Rohingya. AFP

Whether the accused Reuters journalists are found guilty or released when their trial concludes, a worrisome new precedent has been set. The military has flexed its muscles and shown that when it comes to the Rohingya issue, it won’t compromise – democratic dawn or not. For Mratt Kyaw Thu and other journalists attempting to hold the country’s powerful to account, the fight for a free press in Myanmar has not, as some thought, been won – it’s just beginning.