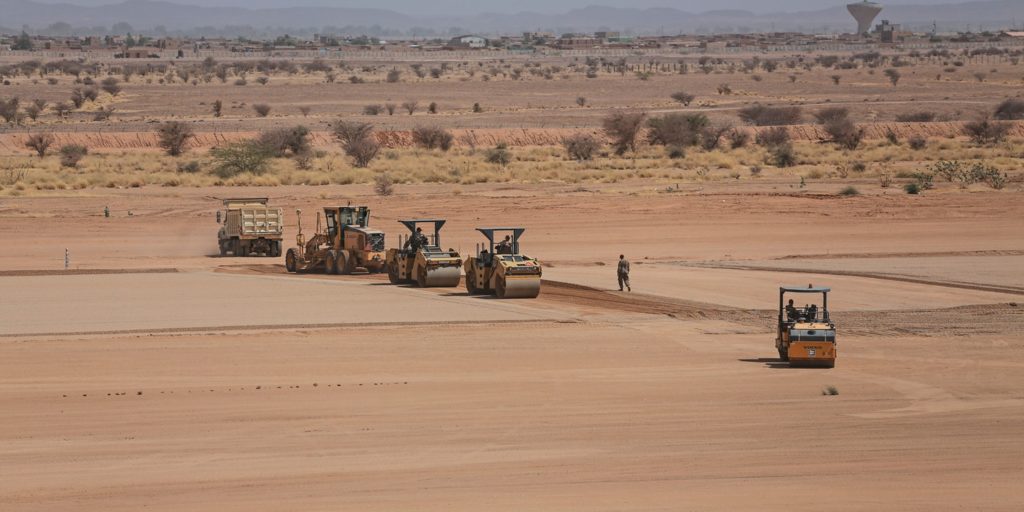 21 Aug 2018 – A U.S. drone base in a remote part of West Africa has garnered attention for its $100 million construction price tag. But according to new projections from the Air Force, its initial cost will soon be dwarfed by the price of operating the facility — about $30 million a year. By 2024, when the 10-year agreement for use of the base in Agadez, Niger, ends, its construction and operating costs will top a quarter-billion dollars — or around $280 million, to be more precise.

And that’s actually an undercount. The new projections from the Air Force do not include significant additional costs, such as salaries of the personnel stationed at the base or fuel for the aircraft flying out of Agadez. The facility, which is part of the expanded U.S. military footprint in Africa, is now the largest base-building effort ever undertaken by troops in the history of the U.S. Air Force, according to Richard Komurek, a spokesperson for U.S. Air Forces in Europe and Air Forces Africa.

The outpost — officially a new airfield and associated facilities at Nigerien Air Base 201, or AB 201 — was once billed as a $50 million base dedicated to surveillance drones, and it was to be completed in 2016.  Now, it’s slated to be a $100 million base for armed MQ-9 Reaper drones which will finally take flight in 2019, though the construction cost is hardly the end of the tab for the facility.

“It’s probably one of the most remote U.S. military airbases ever built,” said Dan Gettinger, co-founder and co-director of the Center for the Study of the Drone at Bard College and the author of a guide to identifying drone bases from satellite imagery. “Most drone bases on the African continent are appendages to larger airports and airfields, but not Agadez. The existing infrastructure is not there. So, the scale of the project is huge.”

Air Force documents submitted to Congress in 2015 note that the U.S. “negotiated an agreement with the government of Niger to allow for the construction of a new runway and all associated pavements, facilities, and infrastructure adjacent to the Niger Armed Force’s Base Aerienne 201 (Airbase 201) south of the city of Agadez.” When the National Defense Authorization Act for fiscal year 2016 was introduced, embedded in it was a $50 million request for the construction of an “airfield and base camp at Agadez, Niger … to support operations in western Africa.”

Reporting by The Intercept found that the true cost of the airfield is double the reported sum — all of it laid out in a September 2016 article on the “$100 Million Drone Base in Africa.” Despite more recent news reports that the price tag of the base has risen to $110 million, Komurek told The Intercept that the total cost of the project has remained roughly the same, topping out at $98.5 million next year.

While the total budget hasn’t changed, the way its costs are divided has. The price of construction jumped from $50 million to $60 million due to “unanticipated effects of the austere conditions and remote location of Agadez,” including the effects of severe weather, according to Komurek. In fact, in a June 2017 letter to Rep. Charlie Dent, then a senior member of the House Appropriations Committee and chair of the Subcommittee on Military Construction, Veterans Affairs, and Related Agencies, the Defense Department justified the $10 million increase by explaining that “poor initial planning and design” led to unforeseen projects, increased costs in acquiring and delivering three aircraft shelters, and a need for new perimeter security measures.

The Agadez base is now the largest “airman-built” project in Air Force history, according to Mark Kinkade of the Air Force Installation and Mission Support Center, eclipsing construction at Al-Dhafra Air Base in the United Arab Emirates, a longtime clandestine outpost from which the U.S. flies drones and fighter aircraft. Prior to that, the record-holder was Phan Rang Air Base in South Vietnam, which had nearly 150 aircraft assigned to it in 1969. 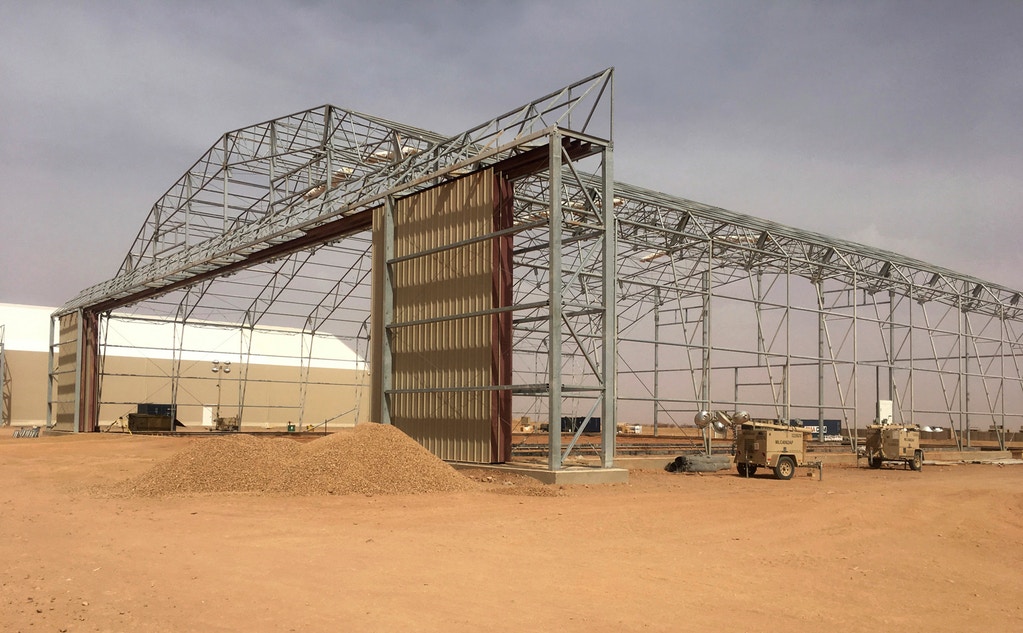 A hangar being built at a new U.S. drone base, officially known as Nigerien Air Base 201, in Agadez, Niger, April 15, 2018. Photo: Carley Petesch/AP

The U.S. outpost at Agadez might be remote, but it’s far from spartan. Photographs and videos released by the military show a base with all the typical American bells and whistles. Walk through the entryway where the overhead sign reads “Welcome to Agadez: Niger’s Best Kept Secret,” look around the base, and you’ll notice the three massive hangars that each cost $1.58 million. You’ll see large satellite dishes; rows of air-conditioned Quonset hut-shaped tan tents; and an Airmen Resiliency Center that serves as both a chapel and recreation center, with Wi-Fi and bookcases filled with few books but many movies and board games. Walk out of the triple-digit heat into the climate-controlled (and cleverly named) Dezert Café, and you can watch ice hockey on a big-screen TV while chowing down on chicken or pizza or fish or cookies or potato chips, and then wash it all down with bottled water, Snapple, Sprite, Gatorade, Coke, or Dr Pepper. Each cafeteria table even comes equipped with a bottle of yellow hand sanitizer and any condiment — ketchup, mustard, steak sauce, hot sauce, Sriracha, soy sauce, Tabasco — that you could hope for.

Earlier this year, the Air Force also put out a call for contractors to provide weight room equipment for the base. The solicitation laid out how the gym will be outfitted: weight plates ranging from 2 1/2 pounds to 45 pounds, dumbbells in five-pound increments up to 100 pounds, and two “Rogue Abram GHD 2.0” or equivalent pieces of equipment. For the uninitiated, the former is what its manufacturer calls “the perfect Glute Ham Developer for any garage gym or training facility where space is at a premium.”

To keep the gym lit, the Wi-Fi on, the big screen bright, and the air conditioning running, not to mention the water potable and the troops fed, requires a significant amount of money. In 2016, the Pentagon told The Intercept that the annual cost to keep the base running would be slightly less than $13 million per year. Komurek explained, however, that those numbers were “limited” and did “not cover the same categories of sustainment costs” as the new $30 million estimate. “In addition to the initial stand-up costs of a site, there are annual operations and maintenance sustainment costs for logistical support, maintenance and security which change based on the footprint and mission set supported,” he explained by email. “The sustainment cost for AB201 is estimated to be approximately $30M per year.”

Construction of the base began during the summer of 2016, and the U.S. military hoped that drones would be flying from Agadez by the end of that year. According to Komurek, construction won’t be completed until the end of this year, and aircraft will not fly from the base until 2019. “The challenge of building this enormous airfield in the middle of the dessert has resulted in the delays that we’ve seen in getting this base operational,” Gettinger told The Intercept.

In the time since construction at Agadez began, U.S. military operations in North and West Africa have dramatically increased. Since 2016, the U.S. has carried out hundreds of drone strikes targeting Al Qaeda and Islamic State militants, including two in June, in neighboring Libya. U.S. forces have also been operating alongside Nigerien forces, a fact laid bare by an October 4, 2017, ambush by ISIS in the Greater Sahara militants near the Mali border, about 600 miles from Agadez, that killed four U.S. soldiers and wounded two others.

It took just over 1 1/2 hours for the first aircraft, an unarmed “U.S. ISR platform,” to arrive at the scene of the attacks, according to Army Maj. Gen. Roger Cloutier. If the outpost at Agadez had been completed on schedule, in late 2016, could armed MQ-9 Reapers have come to the rescue of the ambushed Americans? The Intercept put that question to Gen. Tod D. Wolters, the commander of U.S. Air Forces in Europe and Air Forces Africa. The USAFE-AFAFRICA press office responded that “it would be inappropriate for us or Gen. Wolters to speculate or comment on that hypothetical scenario.”

A Massive U.S. Drone Base Could Destabilize Niger — and May Even Be Illegal Under Its Constitution

U.S. Military Is Building a $100 Million Drone Base in Africa