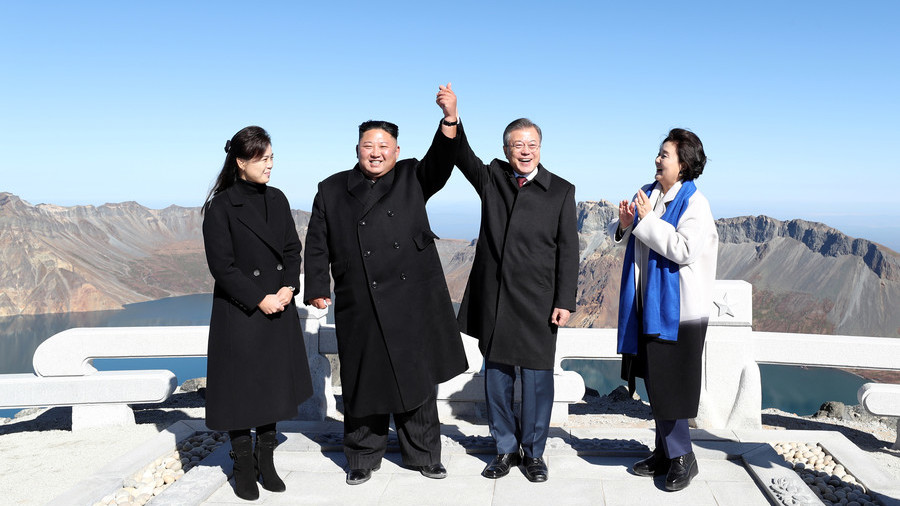 21 Sep 2018 – It can’t get more symbolic than that. The leaders of the two Koreas this week clasped hands atop the highest mountain on the peninsula, vowing to unite in peace. The ball is now in Washington’s court to help deliver that peace.

This year has seen several diplomatic milestones already in the rapprochement between North and South Korea. But the three-day summit this week has advanced the cause for peace on the peninsula even further.

On the second day of his historic visit, President Moon addressed an estimated 150,000 people in the May Day stadium in Pyongyang during which he repeatedly referred to “my Korean brothers and sisters”. To rapturous applause, he called for peace and reunification of the “great Korean people”.

The next day, Moon and Kim hiked up Mount Paektu accompanied by their wives and delegates. The mountain is revered by North and South Koreans as the spiritual birthplace of the nation, going back 5,000 years. As Moon had noted in his stadium speech the previous night, Koreans have been living together in peace for millennia; it is only in the past 70 years they have been divided by Cold War and a brutal civil conflict (1950-53).

That division seems now to be coming to an end after this week’s fraternal summit.

It wasn’t all idle talk either. Both sides committed to demilitarize the border separating the countries and form a joint military committee to oversee deconfliction mechanisms. The two leaders set out plans to integrate the states through transport systems and economic cooperation.

On the painful issue of reuniting families torn apart by the war, there are plans to regularize contacts across the border.

What’s boosting the prospects of a comprehensive peace settlement is the positive reaction from the Trump administration. President Trump hailed the inter-Korea summit this week as “tremendous” and endorsed the push for peace.

Mike Pompeo, the US Secretary of State, said he was instructing officials to resume negotiations with North Korea

“at the earliest opportunity”.

“On the basis of these important commitments [by North and South Korea], the United States is prepared to engage immediately in negotiations,” said Pompeo.

So far, so good. North Korea’s Kim this week reaffirmed his commitment to dismantle facilities for making nuclear weapons. But he wants the US to make “corresponding” concessions.

This is not going to be a unilateral process in which the North gives up its nuclear arsenal without something major in return from Washington. Kim did not specify what US reciprocation would entail. But it is believed to involve security guarantees from the US in the form of a peace treaty to finally end the Korean War.

North Korea would also want a permanent end to the annual US military maneuvers with its South Korean ally, which Pyongyang has always viewed as a provocation to its security. Additionally, if the two Koreas normalize ties and begin a reunification process, then American forces – currently numbering some 28,000 troops – would be obliged to withdraw from South Korean territory.

Trump and Pompeo seem to have moved significantly from earlier high-handed demands for a rapid “complete, verifiable, irreversible denuclearization” by North Korea. The Trump administration, perhaps surprisingly, has shown a prudent flexibility, and appears to be willing to take an incremental approach of trust-building.

It is astounding how far relations have improved in recent months. This time last year, Trump made a reckless warmongering speech at the United Nations General Assembly in which he lampooned Chairman Kim as “rocket man” and vowed to “totally destroy” the country if it threatened the United States with its intercontinental ballistic missiles.

Kim was at times equally combative, blasting Trump as “senile” and threatening with the usual “sea of fire” North Korean rhetoric.

Many people around the world feared that a nuclear war was imminent. All changed, however, when Kim extended a hand of friendship to South Korean president Moon at the beginning of this year, and spoke about national unity. Moon, who has long political experience of working for detente between the two states, quickly reciprocated. He was elected in May 2017 with the promise of pursuing peace with the North.

In April this year, the two Korean leaders held an historic summit at the demilitarized zone in a ceremony which saw them plant trees using soil and water from both sides of the border.

It was Moon who then facilitated the breakthrough between Trump and Kim, which culminated in the Singapore summit in June, the first time a sitting US president ever met a North Korean leader.

Next week, the South Korean president is due to meet Trump during the UN General Assembly, when it is expected that he will convey details of what concessions North Korea wants the US to make in order to drive the denuclearization process.

The ball is in the US court. Trump needs to deliver substantive changes in US policy towards Korea. A declaration to end the Korean War would be a long-overdue start towards assuring North Korea’s security, and establishing peace on the peninsula.

But Trump needs to go further. Playing hard ball with Pyongyang will not work. Easing punitive sanctions on North Korea in recognition of concrete steps to dismantle its nuclear arsenal seems an appropriate way forward.

The danger is the process could come unstuck from two factions in Washington. The first is the militarists and imperial planners who will be averse to American withdrawal from the Korean Peninsula. That decades-old US military presence is less about “protecting” South Korea, and much more about projecting American power in the Asia-Pacific against China and Russia.

The second faction that could derail peace prospects is the “anti-Trump” political establishment dominated by Democrats and their media supporters. This faction loathes everything about Trump, no matter if he happens to be doing something good, as in diplomacy with North Korea. Let’s hand it to Trump. He has managed to give peace a chance with Kim Jong-un.

Still, the anti-Trump brigade don’t seem pleased about that. The New York Times grudgingly headlined on the summit this week: “North Korea’s New Nuclear Promises Fall Short of US Demands”.

Another naysayer was the Washington Post which snorted“North Korea is now under minimum pressure” to denuclearize, mocking Trump’s avowed policy of “maximum pressure”.

In the same way that President Trump is hobbled by domestic enemies from normalizing US relations with Russia, he may find that his peace offers to North Korea are also stymied. That surely would be a perversely wasted opportunity for ending a historic conflict.

Nevertheless, US spoiling tactics aside, the people of Korea, North and South, seem to now have the determination and courage more than ever to forge their own destiny. They will try to bring an end to war, no matter what Washington does. The days of American bullying power are waning.