Visit by president who once compared himself to Hitler marred by Holocaust remarks. 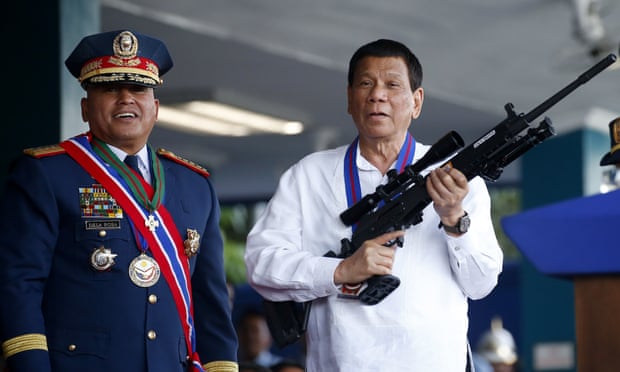 2 Sep 2018 – The Philippine president, Rodrigo Duterte, who once compared himself to Hitler and his bloody war on drugs to the Holocaust, will meet the Israeli prime minister, Benjamin Netanyahu, on Monday [3 Sep] on a first visit by a Filipino head of state to Israel.

The hardline former mayor and prosecutor wants to buy weapons, after pivoting away from a previous reliance on US arms reduced by human rights concerns and diplomatic spats. Netanyahu’s government sold the Philippines radar and anti-tank equipment worth £16m in 2017.

Duterte’s visit has been promoted within Israel and the Philippines as an opportunity for him to meet thousands of Filipino expatriate workers and commemorate Manila’s role in the second world war as a safe haven for about 1,300 Jews.

Historically, the two countries have a special bond. In 1947, the president of the Philippines at the time, Manuel Roxas, provided a crucial vote at the United Nations to create the state of Israel.

While in Jerusalem, Duterte will tour the Yad Vashem Holocaust memorial, visit a monument erected to remember the actions taken by the Philippines during the Holocaust, and meet two Jews who were rescued by his country. He will also meet the Israeli president, Reuven Rivlin.

“We assign great importance to this visit, which symbolises the strong, warm ties between our two peoples as well as the enormous potential for developing and strengthening the relations,” Israel’s foreign ministry said in a statement.

But the 73-year-old former prosecutor’s trip has been marred by his previous comments on the Holocaust.

In 2016, he told reporters he had been compared to a “cousin of Hitler” by critics. “If Germany had Hitler, the Philippines would have …” he said, pausing and pointing to himself. “Hitler massacred 3 million Jews … there’s 3 million drug addicts. There are. I’d be happy to slaughter them,” he said.

Duterte understated the killings – more than 6 million Jews were killed by the Nazis and their collaborators – but the comments drew intense global condemnation, and he later apologised.

Israeli human rights figures have lambasted the trip, specifically the meeting with Rivlin that they said in a letter would bring the presidency “into disrepute”. In a written appeal, an Israeli lawyer, Eitay Mack, said: “[It] is most inappropriate for a mass murderer who supports rape, shooting in the genitalia of women and bombing schools, to meet the Israeli president.”

Official Filipino police figures put the number of suspects killed in police-led anti-drug raids at more than 4,500 since Duterte took office in June 2016, although rights groups put the figure much higher and say many were not involved in narcotics. The international criminal court has launched an initial inquiry into allegations of crimes against humanity.

The founding editor of the Times of Israel newspaper, David Horovitz, wrote in an op-ed that Duterte would arrive “professing friendship, seeking weaponry. This man has no place here.”

Duterte joins a list of other politicians with which Netanyahu developed relations that have concerned Jewish communities in Israel and abroad. In July, he met the Hungarian prime minister, Viktor Orbán, who has been accused of antisemitism in his populist, anti-immigration campaign to court rightwing voters. Netanyahu has also deepened ties with US evangelicals, even some accused of making antisemitic statements.