5 Sep 2018 – The United Nations has released a searing report that details Myanmar’s state violence against an ethnic and religious minority in that country known as the Rohingya.

The report demands that top leadership in Myanmar’s powerful military be held accountable for genocide and other international crimes.

As co-directors of the Institute for Genocide and Mass Atrocity Prevention at Binghamton University, we see this recognition of genocide in Myanmar as an opportunity to help mobilize the international community to take more decisive action than it has so far against the Myanmar government and in support of the Rohingya.

The independent fact-finding mission sponsored by the U.N. interviewed hundreds of Rohingya refugees who fled the country since August 2017. Hundreds of thousands of Rohingya, including infants, children, adults and the elderly, were forced to leave by a wave of mass killings, rape, torture and the burning of hundreds of their villages by the Myanmar military.

Those attacks, which the military labeled as a “clearance operation” against a small group of Rohingya militants, have driven more than 700,000 Rohingya into sprawling refugee camps in southeast Bangladesh. The death toll from these attacks is impossible to determine with any accuracy given the government’s expulsion of nearly all independent observers. However, a growing consensus puts the figure in the tens of thousands.

The latest wave of attacks on the Rohingya – who have been described as “the world’s most persecuted minority” – is only the latest chapter in decades of discrimination, persecution and violence directed at them. Even though the Rohingya have lived in Myanmar’s Rakhine state for centuries, the Myanmar government has long refused to recognize the them as one of the country’s ethnic minorities. The government has revoked their citizenship and denied them legal status in the country.

The report is clear that the military’s attacks, which began in August 2017, must be named as genocide.

In the complex world of global diplomacy, using the term “genocide” to describe a state’s attacks on its own population is extremely rare. The report argues that the military’s acts meet the legal definition of the international crime of genocide in nearly all respects. Genocide occurs when any number of violent acts are taken with the “intent to destroy, in whole or in part, a national, ethnical, racial or religious group.”

The requirement of “specific intent” is notoriously difficult to prove as a matter of law. Yet the report shows that the military’s acts, together with public statements by military and civilian officials in Myanmar, demonstrate intent. The report documents that army units killed and raped members of the Rohingya ethic group with the specific intent to destroy, in part or in whole, the group as such.
The U.N. report reinforces the findings of a comprehensive report published by the international human rights group Fortify Rights in July. The U.N. report documents the many preparations that the military made in advance of the supposed reaction to Rohingya militant attacks on Aug. 25, 2017.

There were increases in hate speech, especially via Facebook. The Myanmar government removed human rights and relief organizations from the areas of Rakhine province where the Rohingya lived. And they positioned troops in those areas.

This type and scope of evidence is comparable to cases where courts have found sufficient proof of “specific intent” for the crime of genocide, such as the International Criminal Tribunal for Rwanda.

The second striking feature of the report is its willingness to name names. It charges the top leadership of Myanmar’s military with direct criminal responsibility for the genocide. It urges that they be investigated and prosecuted, either by the International Criminal Court or by a special criminal tribunal. More commonly the naming of individuals is left to the trial stage. 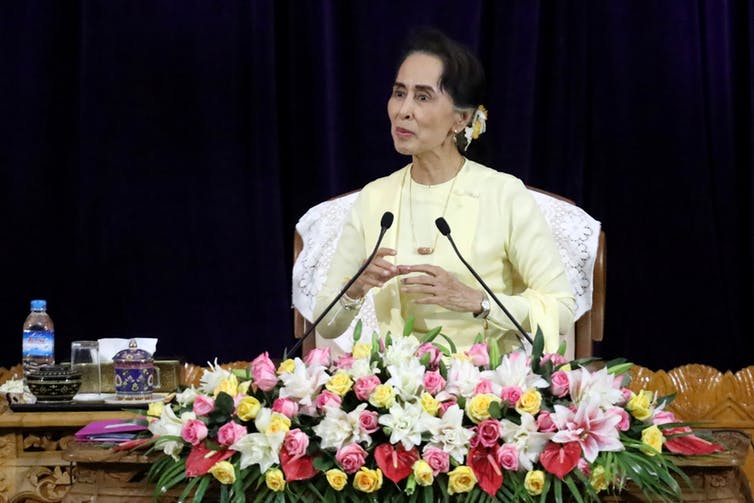 She is not charged with direct responsibility for international crimes. The report does, however, deplore her willingness to share the military’s fantasy of the Rohingya as illegal Bengali immigrants and Islamic terrorists. It also says that she has abetted the military in multiple ways.

The report concludes with a direct reference to Aung San Suu Kyi and her government: “Through their acts and omissions, the civilian authorities have contributed to the commission of atrocity crimes.”

Is this unusually blunt language likely to have an effect on the international community?

The Rome Statute of the International Criminal Court is the global agreement that establishes the court that would prosecute the international crime of genocide. Myanmar is not a party to the agreement.

As such, its citizens can only be prosecuted if the U.N. Security Council votes to “refer” the situation in Myanmar to the court, a move the Security Council has already previously made in both Sudan and Libya.

However, barriers exist. Russia repeatedly vetoed the Security Council’s efforts to use this approach in Syria. Similarly, China has a strong interest in maintaining its political and economic leverage in neighboring Myanmar. It almost certainly would block any Security Council attempts to refer the Myanmar situation for prosecution.

Well aware of this, the report’s recommendations include alternatives, among them forming a U.N.-backed international criminal tribunal, along the lines of those conducted in Rwanda and the former Yugoslavia.

Such an “ad hoc” tribunal would not need Security Council approval.

But given Myanmar’s refusal to cooperate in any international efforts, and given the great costs and logistical and diplomatic challenges of such special tribunals, this seems unlikely.

Myanmar is one of 149 countries that have ratified the Genocide Convention, the international agreement which defines genocide and the responsibility of countries when it occurs. All signatories have pledged to take action to prevent and punish the crime of genocide. The case in Myanmar demonstrates that those who have signed the Convention do not always meet their obligations. They may, in fact, be the perpetrators of genocide, and the U.N. is limited in its ability to enforce compliance.

As such, there is little in the way of concrete steps that the report can recommend, apart from targeted sanctions for top government and military officials, and an arms embargo against the Myanmar military.

Even these would do little to relieve the plight of the more than 700,000 Rohingyas now stranded in Bangladesh, who remain in limbo. They are stateless. They are dependent entirely on international relief organizations. And they are without any clear path out of their misery.

Still, the report is a step forward in the international community’s response to the Rohingya crisis, even if a small one. Calling genocide by its name, the report demands that the world pay attention. Naming and shaming perpetrators, it demands that they face justice – no matter how long this may take.

2 Responses to “UN Report Documents Genocide against Rohingya: What Now?”