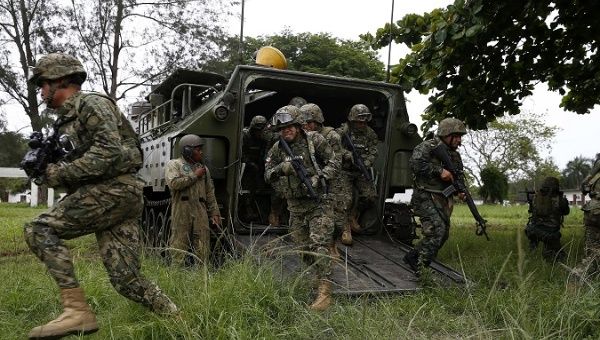 This years’ edition of Unitas is number 58. | Photo: EFE

RELATED: US Invasions in Latin America and the Caribbean

The exercises first took place in Venezuela, in 1960, in the context of the Cold War and U.S. anti-communism. This year, it will take place in Cartagena, between August 30 and September 11.

Although the event presents itself as promoting “hemispheric solidarity,” some countries are concerned about the increasing U.S. presence in Latin America.

Venezuela is not part of Unitas 2018 and the military exercises to take place in neighboring Colombia are seen as a threat to the South American country and peace in the region.

Earlier this month Bolivian President Evo Morales, warned that U.S. military presence in the region “does not guarantee dignity or sovereignty.”

The exercises take place on the backdrop of increasing threats by the U.S. government against the elected government of Nicolas Maduro in Venezuela. These threats range from economic sanctions to openly calling for a military coup.

RELATED: Argentina: Over 60 Social Movements Protest US ‘Military Base’

During Unitas 2018, navies will carry out different operations such as surface maneuvering, anti-aircraft defense, humanitarian assistance and disaster response along with submarine and diving training.

The exercises Unitas multinational naval exercises are organized every year in the framework of the Inter-American Treaty of Reciprocal Assistance (TIAR).

In 2012 Bolivia, Ecuador, Nicaragua, and Venezuela (then members of the Bolivarian Alliance for the Peoples of Our America) withdrew from the TIAR, denouncing it for furthering U.S. geopolitical interests in the region.

Ecuador, which recently withdrew from ALBA is among the South American countries that have joined Unitas after years of refraining from participation. In 2007, former president Rafael Correa decided to withdraw from joint military exercises with the United States.

In June, in the framework of increasing military relations with the U.S., Ecuador’s Defense Minister Oswaldo Jarrin announced the country would participate in the 2018 edition. “We resume our path, and we want to do it with all our commitment and enthusiasm because we have to make up for lost time and recover our level of training in multinational exercises,” he told the National Assembly.

Jarrin also announced in June that the Ecuadorean military would begin training in the U.S.

Human rights groups have denounced U.S. training for Latin American militaries because alumni’s of institutions like the Inter-American Defense College have participated in human rights violations in their countries of origin.

One example is former Guatemalan president and retired military officer Otto Perez Molina who was involved in the torture and murder of Indigenous and Campesinos during the country’s civil war (1960-1996).

Other countries that have re-establish relations with the U.S military are Brazil and Argentina.