Before Columbus: How Africans Brought Civilization to America

On 12 Oct America’s government offices, businesses, and banks all grind to a halt in order to commemorate Columbus Day. In schools up and down the country, little children are taught that a heroic Italian explorer discovered America in 1492, and various events and parades are held to celebrate the occasion. 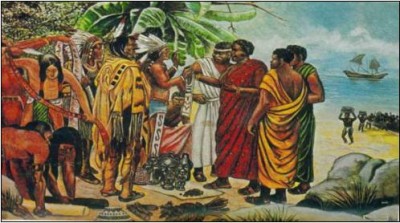 It has now become common knowledge amongst academics that Christopher Columbus clearly did not discover America, not least because is it impossible to discover a people and a continent that was already there and thriving with culture. One can only wonder how Columbus could have discovered America when people were watching him from America’s shores?

Contrary to popular belief, African American history did not start with slavery in the New World. An overwhelming body of new evidence is emerging which proves that Africans had frequently sailed across the Atlantic to the Americas, thousands of years before Columbus and indeed before Christ. The great ancient civilizations of Egypt and West Africa traveled to the Americas, contributing immensely to early American civilization by importing the art of pyramid building, political systems and religious practices as well as mathematics, writing and a sophisticated calendar.

The strongest evidence of African presence in America before Columbus comes from the pen of Columbus himself. In 1920, a renowned American historian and linguist, Leo Weiner of Harvard University, in his book, Africa and the discovery of America, explained how Columbus noted in his journal that Native Americans had confirmed that “black skinned people had come from the south-east in boats, trading in gold-tipped spears.”

One of the first documented instances of Africans sailing and settling in the Americas were black Egyptians led by King Ramses III, during the 19th dynasty in 1292 BC. In fact, in 445 BC, the Greek historian Herodotus wrote of the Ancient Egyptian pharaohs’ great seafaring and navigational skills. Further concrete evidence, noted by Dr. Imhotep and largely ignored by Euro-centric archaeologists, includes “Egyptian artifacts found across North America from the Algonquin writings on the East Coast to the artifacts and Egyptian place names in the Grand Canyon.”

In 1311 AD, another major wave of African exploration to the New World was led by King Abubakari II, the ruler of the fourteenth century Mali Empire, which was larger than the Holy Roman Empire. The king sent out 200 ships of men, and 200 ships of trade material, crops, animals, cloth and crucially African knowledge of astronomy, religion and the arts.

African explorers crossing the vast Atlantic waters in primitive boats may seem unlikely, or perhaps, far fetched to some. Such incredible nautical achievements are not as daunting as they seem, given that
numerous successful modern attempts have illustrated that without an oar, rudder or sail ancient African boats, including the “dug-out,” would certainly have been able to cross the vast ocean in a matter of weeks.

As time allows us to drift further and further away from the “European age of exploration” and we move beyond an age of racial intellectual prejudice, historians are beginning to recognize that Africans were skilled navigators long before Europeans, contrary to popular belief.

Of course, some Western historians continue to refute this fact because, consciously or unconsciously, they are still hanging on to the 19th-century notion that seafaring was a European monopoly.

After all, history will tell you that seafaring is the quintessential European achievement, the single endeavor of which Europeans are awfully proud. Seafaring allowed Europe to conquer the world. The notion that black Africans braved the roaring waters of the Atlantic Ocean and beat Europeans to the New World threatens a historically white sense of ownership over the seas.

When most people think about ancient Mexico, the first civilizations that come to mind are the Incas, Aztecs and the Maya. However, during the early 1940’s archeologists uncovered a civilization known as the Olmecs of 1200 BC, which pre-dated any other advanced civilization in the Americas.

The Olmec civilization, which was of African origin and dominated by Africans, was the first significant civilization in Mesoamerica and the Mother Culture of Mexico.

Olmecs are perhaps best known for the carved colossal heads found in Central Mexico, that exhibit an unmistakably African Negroid appearance. Ancient African historian Professor Van Sertima has illustrated how Olmecs were the first Mesoamerican civilization to use a written language, sophisticated astronomy, arts and mathematics and they built the first cities in Mexico, all of which greatly influenced the Mayans and subsequent civilizations in the Americas. “There is not the slightest doubt that all later civilizations in [Mexico and Central America], rest ultimately on an Olmec base,” once remarked Michael Coe, a leading historian on Mexico.

Africans clearly played an intricate role in the Olmec Empire’s rise and that African influence peaked during the same period that ancient Black Egyptian culture ascended in Africa.

A clear indicator of pre-Columbus African trans-Atlantic travel is the recent archeological findings of narcotics native to America in Ancient Egyptian mummies, which have astounded contemporary historians. German toxicologist, Svetla Balabanova, reported findings of cocaine and nicotine in ancient Egyptian mummies. These substances are known to only be derived from American plants. South American cocaine from Erythroxylon coca and nicotine from Nicotiana tabacum. Such compounds could only have been introduced to Ancient Egyptian culture through trade with Americans.

Similarities across early American and African religions also indicate significant cross-cultural contact. The Mayans, Aztecs and Incas all worshipped black gods and the surviving portraits of the black deities are revealing. For instance, ancient portraits of the Quetzalcoatl, a messiah serpent god, and Ek-ahua, the god of war, are unquestionably Negro with dark skin and wooly hair. Why would native Americans venerate images so unmistakably African if they had never seen them before? Numerous wall paintings in caves in Juxtlahuaca depict the famous ancient Egyptian “opening of the mouth” and cross libation rituals. All these religious similarities are too large and occur far too often to be mere coincidences.

Professor Everett Borders notes another very important indication of African presence, which is the nature of early American pyramids. Pyramid construction is highly specialized. Ancient Egypt progressed from the original stepped pyramid of Djosser, to the more sophisticated finished product at Giza. However, at La Venta in Mexico, the Olmecs made a fully finished pyramid, with no signs of progressive learning. Olmecian and Egyptian pyramids were both placed on the same north-south axis and had strikingly similar construction methods. Tellingly, all of these pyramids also served the same dual purpose, tomb and temple.

Ancient trans-Atlantic similarities in botany, religion and pyramid building constitute but a fraction of the signs of African influence in ancient America. Other indicators include, astronomy, art, writing systems, flora and fauna.

Historically, the African people have been exceptional explorers and purveyors of culture across the world. Throughout all of these travels, African explorers have not had a history of starting devastating wars on the people they met. The greatest threat towards Africa having a glorious future is her people’s ignorance of Africa’s glorious past.

Pre-Columbus civilization in the Americas had its foundation built by Africans and developed by the ingenuity of Native Americans. Sadly, America, in post-Columbus times, was founded on the genocide of the indigenous Americans, built on the backs of African slaves and continues to run on the exploitation of workers at home and abroad.

One Response to “Before Columbus: How Africans Brought Civilization to America”