Fact from Fiction: What You Should Know about the Migrant Caravan Making Its Way to the U.S. Border

“There are only two forces driving them: hunger and death.” 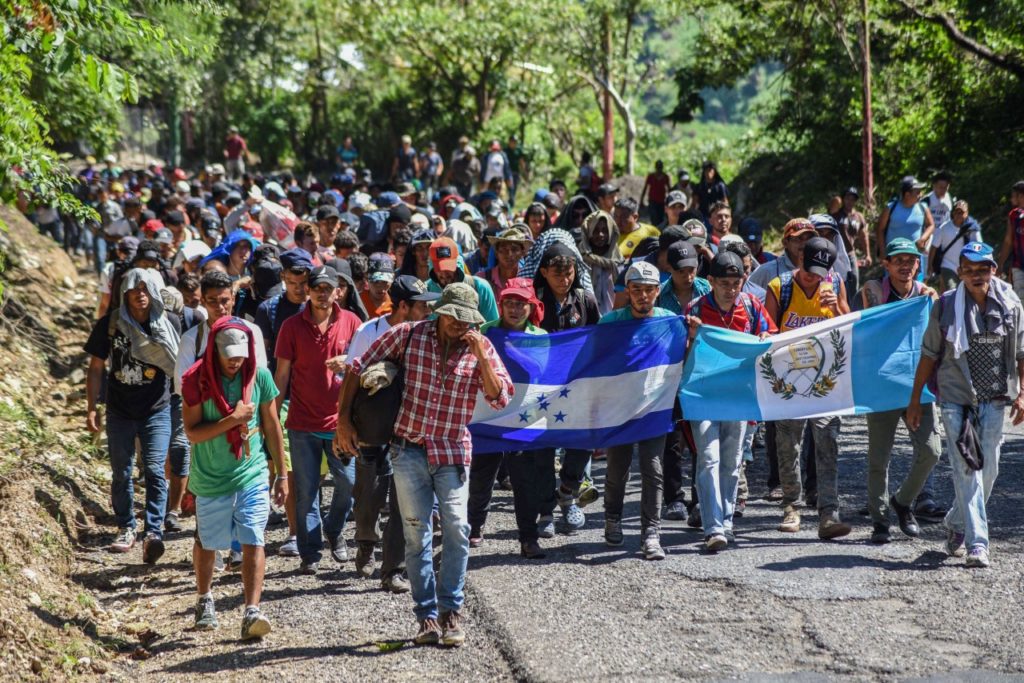 What you should know about the migrant caravan heading toward the U.S.-Mexico border. President Trump on Monday called the caravan a national emergency, saying he had alerted the U.S. border patrol and military.
(Photo credit: ORLANDO ESTRADA/AFP/Getty Images)

23 Oct 2018 – As many as 7,000 Central Americans are making their way to the U.S.-Mexico border, and along with them are a wealth of misinformation and conspiracy theories regarding their motives and character.

While this isn’t the first migrant caravan to make its way to the U.S.-Mexico border under the Trump administration, it is the largest — and with midterm elections only two weeks away, this one has elicited the most strident response from Republicans and the White House, who are leaning on the caravan to stoke anti-immigrant fears in the minds of voters.

To clear the air, here’s what you should know about the caravan itself, and the people in it who have left everything behind in search of a better life.

Who is traveling in the caravan?

Thousands of mothers, fathers, daughters, and sons from Central American countries like El Salvador, Nicaragua, Honduras, and Guatemala are among the estimated 7,000 members of the caravan.

The majority are leaving their countries of origin in search of greater economic opportunity and fleeing gang violence that has made life at home unlivable.

“No one is capable of organizing this many people,” Irineo Mujica of Pueblo Sin Fronteras — the group supporting the caravan — said. Instead, Mujica said, they are motivated by two factors: “hunger and death.”

The caravan is making its way to the border by bus or walking. Many migrants have lacerated or swollen feet, yet continue to march, chanting, “si se puede” — “yes we can” — and are being cheered on by locals.

Story of today: local Mexicans helping out the migrants. Look at this epic ride from a passing trailer. Others giving food and water along the roadside.#caravanamigrante2018 pic.twitter.com/hGSphwGD7g

Carlos Leonidas Garcia Urbina, a 28-year-old Honduran man, dropped everything when he heard news about the caravan and joined with just 500 lempiras ($20) in his pocket.

“We are going to the promised land,” he told the Associated Press.

Ana Luisa Espana, a Guatemalan laundry worker, has acknowledged that while the goal of the caravan is to reach the U.S. border, conditions in her home country are so devastating that she would settle for a job in Mexico.

“We would do anything, except bad things,” she said.

Why are they fleeing?

Very few of those critical of the caravan have stopped to consider why its members are seeking access to the United States.

Many of those traveling with the caravan are from Nicaragua which, as ThinkProgress has previously reported, is in the throes of a brutal authoritarian crackdown. According to the Washington Post, many are also previous deportees who worked and have families within the United States, while others still are fleeing gang and domestic violence in Honduras.

Living conditions in two countries in particular, Honduras and El Salvador, are so dangerous that the United States previously awarded Temporary Protected Status (TPS) to immigrants from those countries, effectively giving them legal sanctuary and work permits. The Honduran city of San Pedro Sula, where the caravan was organized, is one of the most dangerous cities in the world, and El Salvador, ravaged by both an devastating earthquake and a civil war, was named the murder capital of the world in 2016.

Instead, however, the Trump Administration is doing the exact opposite, and threatening to completely cut-off aid to the already poverty-stricken countries of Guatemala, Nicaragua, and El Salvador.

Seeking asylum is not illegal

President Trump has repeatedly threatened to detain and deport anyone from the caravan for crossing the border illegally, but seeking asylum at a port of entry is completely legal.

While it isn’t clear what path the caravan plans to take to arrive at the U.S.-Mexico border, many plan to do just that. According to recent reports, the caravan is currently more than 1,000 miles away from the closest border crossing at McAllen, Texas. Their trip would more than double if they change course and head for the Tijuana-San Diego border, which was the destination of the migrant caravan earlier this year.

The influx of migrants planning to claim asylum at the border comes as the administration has been criticized for its treatment of asylum seekers more broadly. Despite the administration’s repeated assertions that asylum seekers who come through ports of entry will not be arrested, a recent Amnesty International report found that the federal government may have violated international human rights law when immigration officials detained or turned away hundreds of asylum seekers at border ports of entry over the past year.

The conspiracy theories surrounding the caravan

Naturally, the caravan has sparked a frenzy of conspiracy theories on the right. Those theories began snowballing last Thursday when Rep. Matt Gaetz (R-FL) posted a video which purported to show women and children on the caravan receiving cash.

Over the weekend Gaetz doubled-down, telling the New York Times that he suspected the cartels might be involved.

The video, of course, has since been thoroughly debunked (although not before it was picked up by Trump). It was taken in Guatemala, not Honduras, and those receiving a handout were already part of the caravan not, as Gaetz had baselessly suggested, new migrants being paid by liberal philanthropist George Soros.

Gaetz finally admitted he was wrong to CNN on Sunday, but by that time, Trump had already pivoted to a new unfounded conspiracy theory, that “unknown Middle Easterners are mixed in” with the caravan.

Sadly, it looks like Mexico’s Police and Military are unable to stop the Caravan heading to the Southern Border of the United States. Criminals and unknown Middle Easterners are mixed in. I have alerted Border Patrol and Military that this is a National Emergy. Must change laws!

Trump and Gaetz’s tweets encompass two essential aspects of the right-wing fake news ecosystem: Step one, make sure you move quickly so by the time the first conspiracy is debunked, you can instead focus attention on a newer, more outrageous one.

Step two, blame everything on George Soros. The Hungarian billionaire, who’s spent millions bankrolling liberal causes, has been blamed by the right for everything from directly financing the Kavanaugh nomination protests to organizing the gun-control advocacy of the Parkland survivors to coordinating the crackdown against Alex Jones. Soros conspiracies go back years, and he is frequently painted as a bogeyman by authoritarians such as Viktor Orban of Hungary and Russian President Vladimir Putin. He’s also frequently mentioned in far-right sections of the internet like 4chan’s /pol/ and QAnon forums.

Who is providing food? Shelter? Medical care? Security? I smell a Soros https://t.co/OtbPgSwvbo

The “unknown Middle Easterners” which Trump mentioned in a tweet Monday morning apparently stemmed from a segment of the president’s favorite cable news program, Fox & Friends. In the segment, co-host Pete Hegseth claimed that day that “the President of Guatemala…[is] saying they caught over a hundred ISIS fighters in Guatemala.” Though his fellow co-hosts questioned that claim (“Are we sure that’s true?” Steve Doocy asked at one point, according to the Daily Beast), and Hegseth himself admitted it had not been verified, he maintained his position.

“Even one ISIS, even one poison pill is too many in a caravan like that,” he said.

The “ISIS in Guatemala” claim appears to have its roots in a Daily Mail article, which in turn stems from a local report in mid-October, when Guatemalan President Jimmy Morales claimed 100 ISIS had been captured and deported by security forces. No information was given as to who the ISIS suspects were, where and when they were captured, or why they were all in Guatemala to begin with.

It’s also worth noting the Guatemalan state is notoriously corrupt. Morales is being investigated for corruption by the International Commission Against Impunity in Guatemala (CICIG), and is accused of accepting more than a $1 million in illegal campaign donations. Morales also allegedly used resources intended for anti-drug trafficking to spy on and intimidate the CICIG, and is currently seeking $15 billion worth of investments to help boost the economy. All things considered, it would be extremely convenient for Nogales to get back in the U.S.’s favor by announcing the deportation of 100 ISIS terrorists.

OK, I’m becoming a broken record, but one more: as this tweet lays out, this morning’s “terrorist caravan” fearmongering followed the EXACT path that the bogus “ISIS is crossing from Mexico” story did before the 2014 midterms. https://t.co/N1LxD8WqRE

What’s more, as New York Times TV critic James Poniewozik pointed out, this very same trope was used by the GOP during the 2014 election — the only difference was that some of those ISIS fighters also supposedly had Ebola.

How the caravan fits into the current political dialogue

The arrival of thousands of migrants comes as the Trump administration is cracking down on every aspect of immigration.

The federal government is currently weighing a second family separation policy that would result in the indefinite detention of immigrant parents and children detained at the border. A federal judge’s decision to halt the termination of TPS for over 300,000 immigrants from El Salvador, Haiti, Nicaragua, and Sudan was also appealed by the Justice Department recently.

The administration is even considering a rule that would affect nearly 24 million immigrants already living in the United States, denying visas and green cards to individuals who use public programs like SNAP (formerly known as food stamps) or Medicaid.

As the midterm elections edge ever-closer, the Trump administration isn’t willing to stop with the draconian policies it already has on the books — it’s pulling out all the stops and attempting to motivate his base by claiming the United States is facing an immigration crisis.

“The Democrats have launched an assault on the sovereignty of our country, the security of our nation and the safety of every American,” Trump said Monday night. “[The Democrats are to blame] for the crisis on our border.”

The fear of immigration stoked by Trump administration has galvanized the president and allowed other conservative voices to not only crack down on immigration and skirt the facts about the caravan but also to outright lie about the policies Trump has proposed. For example, Trump told USA Today Monday that he would be sending troops to block the migrant caravan. Later that day, the Pentagon said in a statement that it had received no new orders of the sort.

Luke Barnes is a reporter at ThinkProgress. He previously worked at MailOnline in the U.K., where he was sent to cover Belfast, Northern Ireland and Glasgow, Scotland. He graduated in 2015 from Columbia University with a degree in Political Science. He has also interned at Talking Points Memo, the Santa Cruz Sentinel, and Narratively.

Rebekah Entralgo is a reporter at ThinkProgress. Previously she was a news assistant on the NPR Business Desk. She has also worked for NPR member stations WFSU in Tallahassee and WLRN in Miami.