My Grandfather Nelson Mandela Fought Apartheid. I See the Parallels with Israel

It took an international effort to end institutionalised racism in my country – now it must happen again, for Palestinian people. 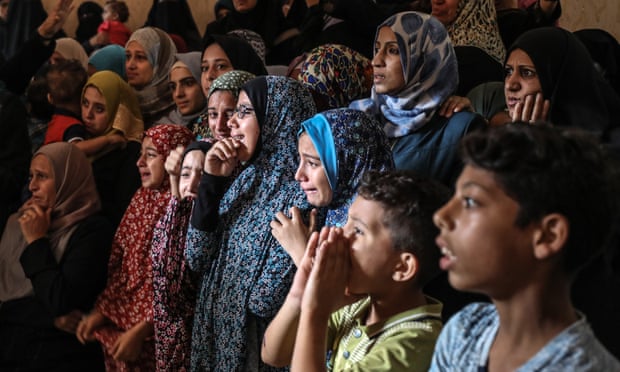 Relatives of 12-year-old Faris Hafez al-Sarasawi at his funeral. He was killed after Israeli soldiers’ intervention in the ‘Great March of Return’ demonstrations in Gaza, October 2018. Photograph: Anadolu Agency/Getty Images

11 Oct 2018 – My grandfather, Nelson Rolihlahla Mandela, would have turned 100 this year. The world is marking the centenary of his birth and celebrating his leadership in the struggle to end apartheid in South Africa. But while my country has long been free from racist minority rule, the world is not yet free of the crime of apartheid.

Like Madiba and Desmond Tutu before me, I see the eerie similarities between Israel’s racial laws and policies towards Palestinians, and the architecture of apartheid in South Africa. We South Africans know apartheid when we see it. In fact, many recognise that, in some respects, Israel’s regime of oppression is even worse.

Apartheid is defined in international law as an “institutionalised regime of systematic oppression and domination by one racial group over any other”. It is about unequal racial power relations upheld by unjust laws that are intended to deny oppressed groups their rights.

Even before Israel passed its “nation state law” (stipulating that only Jews have the right of self-determination in the country) it was easy to see, for anyone willing to look, that the country’s government was committing the crime of apartheid. Its segregation wall, discriminatory admissions committees, ID-card systems, settler-only road networks and the bantustan-like fragmentation of the West Bank gave the game away.

The nation state law made that reality undeniable. Apartheid is the context for a litany of state crimes. Take most recently, for example, Israel’s decision to demolish the Palestinian Bedouin village of Khan al-Ahmar and evict its residents. The aim of this ethnic cleansing is to make way for illegal settlements on occupied Palestinian land.

Yet despite seven decades of apartheid, ongoing theft of Palestinian land, military occupation and massacres of unarmed protesters in Gaza – rightly called the “Palestinian Sharpeville”, after the mass killing in Transvaal in 1960 – each new generation of Palestinians continues the liberation struggle.

Young Ahed Tamimi turned 17 in prison this year, illegally incarcerated for confronting occupying soldiers in her backyard. But just as my grandfather spent 27 years in prison only to become a global icon of freedom, Ahed has become a powerful symbol of Palestinians’ resolute determination to resist. She and her family represent the courageous spirit of Palestinians everywhere who stand defiant in the face of immense brutality. I salute their bravery.

Although Ahed is now free, thousands of Palestinians – including hundreds of children – still languish in apartheid Israel’s jails. In this Nelson Mandela centennial celebration year, we should recall his avowal that “our freedom is incomplete without the freedom of the Palestinian people” and work relentlessly to demand that all Palestinians – whether living in exile, as citizens of Israel or in the occupied territories – are accorded their inalienable human rights.

For we South Africans also know that effective resistance to apartheid requires international solidarity. Just as allies around the world were vital in our struggle for freedom, the spirit of internationalism lives on in the non-violent boycott, divestment and sanctions (BDS) movement supporting the Palestinian liberation struggle. 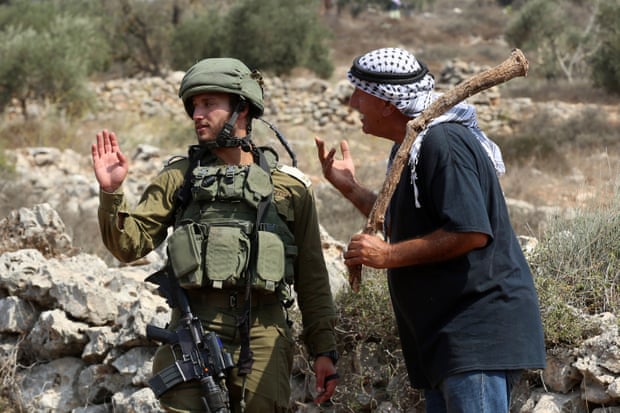 An Israeli soldier with a Palestinian farmer who is waiting to reach a farm to harvest olives, in Yetma, the West Bank. Photograph: Alaa Badarneh/EPA

It gave me hope to see the Labour party call for an end to UK arms sales to Israel two weeks ago. We hope that South Africa will use its standing among the Brics countries to call for an arms embargo too. This important sanction is a minimal requirement to end complicity in maintaining Israeli apartheid. It is not charitable to end complicity in crime, but a profound moral obligation.

These positive and concrete steps continue the struggle that was Mandela’s life’s work. They stand in stark contrast to the shameful attempts to erase Palestinian history (including the Nakba) – a history in which the UK, as in apartheid South Africa, was deeply complicit. They are also a powerful retort to efforts to demonise, if not criminalise, the BDS movement.

All people of conscience have not only the right but also the responsibility to express their disagreement with any state that violates human rights and international law. They have a right to freedom of expression, to speak truth to power, and to stand in solidarity with the oppressed.

History will judge the governments that fail to stand by human rights and international law or, worse, that are complicit in entrenching the denial of those rights. During her recent trip to South Africa, Theresa May tried to erase the UK government’s history of supporting apartheid. She celebrates my grandfather now that he is dead, but has not accounted for the fact that members of her own political party called for him to be hanged and labelled him a terrorist when he was alive.

International pressure was a vital component of the struggle to end apartheid in South Africa. We know it is effective in the case of Israel too, not least because of the vast sums its government spends waging a global campaign to undermine BDS.

Non-violent resistance tactics such as boycotts and ethical divestment, and applying pressure on corporations and governments, including local authorities, to end their involvement in grave human rights violations, are all time-honoured methods for supporting justice movements.

Madiba once called the question of Palestine the “greatest moral issue of our time”, yet the world remains silent. It is incumbent upon us all to do whatever we can to contribute to Palestinian freedom, justice and equality, and to fight against apartheid everywhere.