How Easy It Is to Give Awards to Terrorists 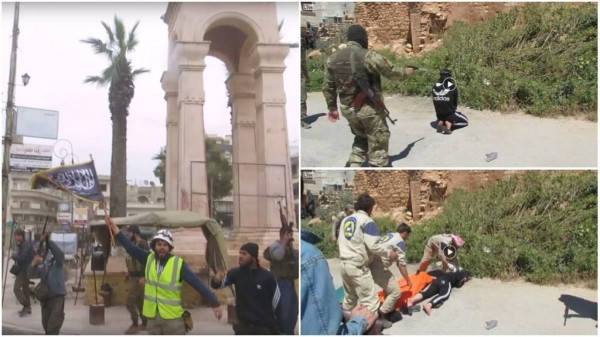 23 Oct 2018 – I am often asked to explain why countries like Iran appear to be so aggressive, involving themselves in foreign wars and seeking to create alliances that they know will provoke the worst and most paranoid responses from some of their neighbors. My response is invariably that perceptions of threat depend very much on which side of the fence you are standing on. Saudi Arabia and Israel might well perceive Iranian actions as aggressive given the fact that all three countries are competing for dominance in the same region, but Iran, which is surrounded by powerful enemies, could equally explain its activity as defensive, seeking to create a belt of allies that can be called upon if needed if a real shooting war breaks out.

The United States and Israel are, of course, masters at seeing everything as a threat, justifying doing whatever is deemed necessary to defend against what are perceived to be enemies. They even exercise extraterritoriality, with Washington claiming a right to go after certain categories of “terrorists” in countries with which it is not at war, most particularly Afghanistan, Yemen and Somalia. Israel does likewise in its attacks on Lebanon and Syria. Both Tel Aviv and Washington have regularly crossed the line drawn by international legal authorities in terms of what constitutes initiating a “just” or “legal” war, i.e. an imminent threat to use force by a hostile power. Neither Israel nor the United States has really been threatened by an enemy or enemies in the past seventy years, so the definition of threat has been expanded to include after-the-fact as with 9/11 and potential as in the case of Israel and Iran.

The “which side of the fence” formulation has also had some interesting spin-offs in terms of how so-called non-state players that use violence are perceived and portrayed. Nearly all widely accepted definitions of terrorism include language that condemns the “use of politically motivated violence against non-combatants to provoke a state of terror.”

It is quite easy to identify some groups that are unambiguously “terrorist.” Islamic State in Syria (ISIS) and its various affiliates fit the definition perfectly, but even in that case there is some ambiguity by those state actors who are ostensibly pledged to eradicate terrorists. There have been credible claims that the United States has been protecting the last enclaves of ISIS in order to maintain its “right” to stay in Syria, allegedly based on the stated objective of completely destroying the group before withdrawal. As long as ISIS is still around in Syria, Washington will have an admittedly illegal justification for doing likewise.

There are two notable groups that should be universally condemned as terrorists but are not for political reasons. They are the Mujaheddin e Khalq (MEK), Iranian dissidents that are based in Paris and Washington, and the so-called White Helmets who have been active in Syria. MEK is particularly liked by Israel and its friends inside the Beltway because it retains resources inside Iran that enable it to carry out assassinations and sabotage, and if it is only Iranians that are dying, that’s okay.

MEK has been on the State Department roster of foreign terrorist organizations since the list was established in 1997. Its inclusion derives from its having killed six Americans in the 1970s and from its record of violence both inside and outside Iran since that time. The group was driven out of Iran, denied refuge in France, and eventually armed and given a military base by Iraq’s leader Saddam Hussein. Saddam used the group to carry out terrorist acts inside Iran. MEK is widely regarded as a cult headed by a husband and wife team Massoud and Maryam Rajavi. Its members were required to be celibate and there are reports that they are subjected to extensive brainwashing, physical torture, severe beatings even unto death, and prolonged solitary confinement if they question the leadership. One scholar who has studied them describes their beliefs as a “weird combination of Marxism and Islamic fundamentalism.” Like many other terrorist groups MEK has a political wing that operates openly referred to as the National Council of Resistance of Iran (NCRI), which is based in Paris, and another front organization called Executive Action which operates in Washington. 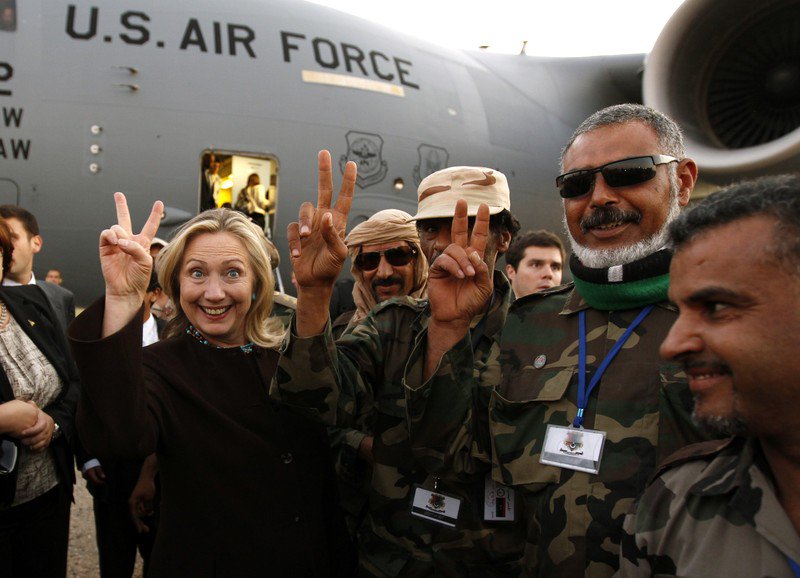 MEK was regarded as a terrorist group until 2012, when it was taken off the Special Designation list by Secretary of State Hillary Clinton. It was removed because multi-million dollar contracts with Washington lobbying firms experienced at “working” congress backed up by handsome speaking fees had induced many prominent Americans to join the chorus supporting NCRI. Prior to 2012, speaking fees for the group started at $15,000 and went up from there. Former Pennsylvania governor Ed Rendell reported more than $150,000 in honoraria. Rudy Giuliani has been paid generously for years at $20,000 per appearance for brief, twenty-minute speeches. Bear in mind that MEK was a listed terrorist group at the time and accepting money from it to promote its interests should have constituted material support of terrorism.

The group’s well-connected friends have included prominent neocons like current National Security Advisor John Bolton and ex-CIA Directors James Woolsey, Michael Hayden and Porter Goss as well as former Generals Anthony Zinni, Peter Pace, Wesley Clark, and Hugh Shelton. Traditional conservatives close to the Trump Administration like Newt Gingrich, Fran Townsend and Secretary of Transportation Elaine Chao are also fans of NCRI. Townsend in particular, as a self-proclaimed national security specialist, has appeared on television to denounce Iran, calling its actions “acts of war” without indicating that she has received money from an opposition group.

MEK’s formula for success in removing itself from the terrorism lift involved paying its way through a corrupt political system. More interesting perhaps is the tale of the White Helmets, who have just been given the 2019 Elie Wiesel Award by the National Holocaust Museum, with the citation

“These volunteer rescue workers have saved lives on all sides of the conflict in Syria. Their motto is ‘To save one life is to save all of humanity.’”

The White Helmets have been praised by those who hate the government of President Bashar al-Assad in Syria and want to see it removed because of its role as a leading element in the propaganda campaign that seeks to instigate violence or use fabricated information to depict the Damascus government as guilty of slaughtering its own citizens. The propaganda is intended to terrorize the civilian population, which is part of the definition of terrorism.

Favorable media coverage derives from the documentary The White Helmets, which was produced by the group itself and tells a very convincing tale promoted as “the story of real-life heroes and impossible hope.” It is a very impressive piece of propaganda, so much so that it has won numerous awards including the Oscar for Best Documentary Short last year and the White Helmets themselves were nominated for the Nobel Peace Prize. More to the point, however, is the undeniable fact that the documentary has helped shape the public understanding of what is going on in Syria, describing the government in Damascus in purely negative terms.

Recently, with the Syrian Army closing in on the last White Helmet affiliates still operating in the country, the Israeli government, assisted by the United States, staged an emergency humanitarian evacuation of the group’s members and their families to Israel and then on to Jordan. It was described in a BBC article that included

“The IDF said they had ‘completed a humanitarian effort to rescue members of a Syrian civil organization and their families’, saying there was an ‘immediate threat to their lives.’ The transfer of the displaced Syrians through Israel was an exceptional humanitarian gesture. Although Israel is not directly involved in the Syria conflict, the two countries have been in a state of war for decades. Despite the intervention, the IDF said that ‘Israel continues to maintain a non-intervention policy regarding the Syrian conflict.’”

All of the Israeli assertions are nonsense, including its claimed “humanitarianism” and “non-intervention” in the Syrian war, where it has been bombing almost daily. The carefully edited scenes of heroism under fire that have been filmed and released worldwide conceal the White Helmets’ relationship with the al-Qaeda affiliated group Jabhat al-Nusra and its participation in the torture and execution of “rebel” opponents. Indeed, the White Helmets only operate in rebel held territory, which enables them to shape the narrative both regarding who they are and what is occurring on the ground.

The White Helmets travelled to bombing sites with their film crews trailing behind them. Once at the sites, with no independent observers, they are able to arrange or even stage what is filmed to conform to their selected narrative. Exploiting their access to the western media, the White Helmets thereby de facto became a major source of “eyewitness” news regarding what was going on in those many parts of Syria where European and American journalists were quite rightly afraid to go, all part of a broader largely successful “rebel” effort to manufacture fake news that depicts the Damascus government as engaging in war crimes directed against civilians, an effort that has led to several attacks on government forces and facilities by the U.S. military. This is precisely the propaganda that has been supported both by Tel Aviv and Washington.

Perhaps the most serious charge against the White Helmets consists of the evidence that they actively participated in the atrocities, to include torture and murder, carried out by their al-Nusra hosts. There have been numerous photos of the White Helmets operating directly with armed terrorists and also celebrating over the bodies of execution victims and murdered Iraqi soldiers. The group’s jihadi associates regard the White Helmets as fellow “mujahideen” and “soldiers of the revolution.”

So, the National Holocaust Museum, which is taxpayer funded, has given an apparently prestigious award to a terrorist group, something which could have been discerned with even a little fact checking. And the museum also might have been sensitive to how the White Helmets have been used in support of Israeli propaganda vis-à-vis Syria. Perhaps, while they are at it, the museum’s board just might also want to check out Elie Wiesel, for whom the award is named. Wiesel, who was a chronicler of Jewish victimhood while persistently refusing to acknowledge what Israel was doing to the Palestinians, notoriously mixed fact and fiction in his best-selling holocaust memoir Night. Ironically, the award and recipient are well matched in this case as mixing fact and fiction is what both Elie Wiesel and the White Helmets are all about.