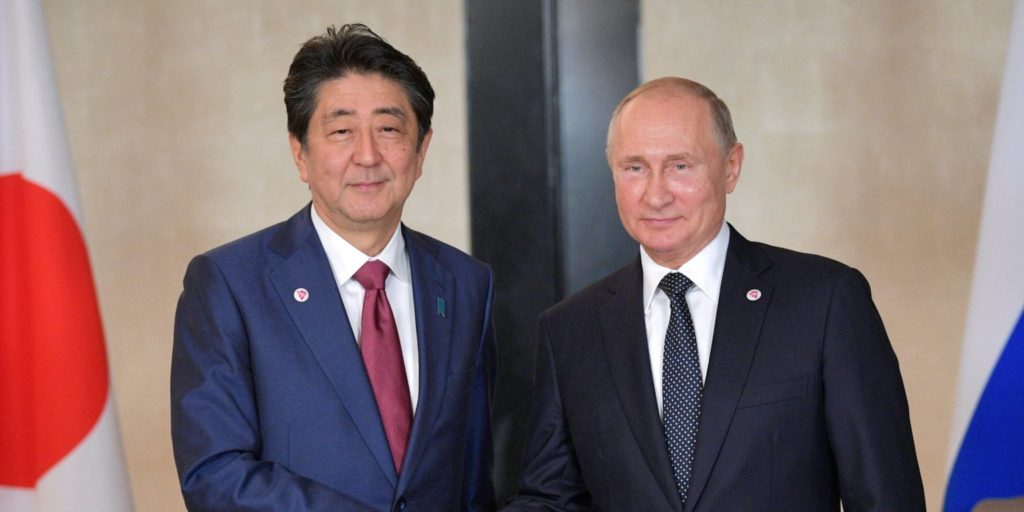 16 Nov 2018 – Japanese Prime Minister Shinzo Abe told Vladimir Putin on Wednesday [14 Nov] he won’t let the US build any military bases on a group of long-disputed islands after Russia returns them to Japan.

At a summit in Singapore, Putin and Abe agreed to accelerate talks over Russia’s return of the Southern Kuril islands — four small Russian islands half way between Japan and Russia — and Abe assured Putin no US military troops would get anywhere near there, The Asahi Shimbun reported.

The Southern Kuril islands off the northern Japanese island of Hokkaido were taken by the Soviet Union in 1945 after World War II.

Abe said: “This issue, which has existed for more than 70 years since the end of the war, will be solved by Putin and me, and not left for the next generation. President Putin and I completely shared that strong desire,” Bloomberg reported.

But the post-war agreement between Japan and the US could prove problematic, as the US can seek to build military bases in Japan due to the Japan-US Security Treaty and Japan-US Status of Forces Agreement (SOFA,) the Asahi Shimbun reported.

The agreements say the US has a duty to protect Japan, which includes a prerogative to built military bases.

Wednesday’s talks are late culmination of the 1956 joint-declaration where the Soviet Union promised it would give Japan two of those islands.

The declaration wasn’t a peace treaty though, and Abe has previously said he won’t sign that treaty until the islands are Japanese again, the Associated Press reported.

Abe’s promise on Wednesday is an attempt to sweeten the proposal, but Putin has previously been less forward about the deal.

Russian news agency TASS quoted Putin saying the 1956 declaration “certainly demands separate, additional, and in depth analysis, given that not everything is clear in that Declaration,” Reuters reported, citing TASS.

Abe and Putin are set to meet again on November 30 at a G20 summit in Buenos Aires, Argentina, and when Abe goes to Russia in early 2019.

Abe has said he wants the issue resolved before his tenure ends in 2021, the Asahi Shimbun said.

Japan claims the Soviet Union booted out 17,000 Japanese residents when they took the islands in 1945.

Japanese people call the islands the Northern Territories and Russians call them the Southern Kuriles.