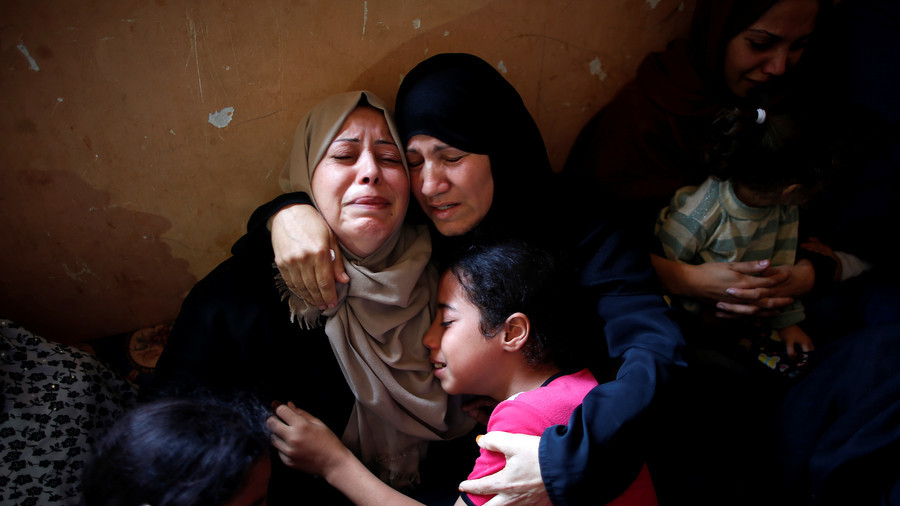 Relatives of Palestinian Mohammed Abbas, who was killed at the Israel-Gaza border fence. © Reuters / Suhaib Salem

15 Nov 2018 – After a Twitter backlash, the Guardian was forced to amend a brazenly propagandized headline which sought to undermine the basic rights of Palestinians and elevate Israeli soldiers to levels previously thought unimaginable.

“We remain editorially independent, our journalism free from commercial bias and our reporting open and accessible to all,” reads an advertisement on the Guardian UK’s online newspaper when you click on a recent story.

“Imagine what we could continue to achieve with the support of many more of you. Together we can be a force for change.”

The article in question that I clicked on is a recent story entitled “Eight dead in undercover Israeli operation in Gaza.” According to the opening paragraph of the report, Israeli forces killed seven Palestinians in the Gaza Strip in an “apparently botched undercover raid and ensuring firefight.”

Sounds fairly straightforward, right? Just another day in Gaza, where Palestinians and Israelis alike find themselves in the line of fire, with the number of dead Palestinians outnumbering those on the Israeli side.

However, this wasn’t the only title the Guardian had previously given this same story. The original title was a poorly crafted “Israeli officer killed during raid in which seven Palestinians died.”

Of course, the Guardian will no longer have to worry about answering those questions as it wasted no time in changing its headline in the wake of what can only be described as a viral Twitter frenzy. The UK-based Canary described it as the “Guardian headline on Palestine that’s shaming the entire field of journalism.”

If they had been allowed to get away with this shoddy piece of journalism, one could still argue that it is just a title and we should not spend our time fussing and feuding over the intricate wording of titles. After all, what matters to a story and its journalistic integrity is its content, right?

Anyone who knows and understands anything about modern journalism and propaganda know this to be complete nonsense. Firstly, a study by the Media Insight Project, an initiative of the AP-NORC Center for Public Affairs Research and the American Press Institute found that over half of Americans surveyed were mere headline readers and nothing more.

The effects of this painful reality go well beyond that of a resulting lazy populace. As explained by Maria Konnikova in the New Yorker:

“Psychologists have long known that first impressions really do matter—what we see, hear, feel, or experience in our first encounter with something colors how we process the rest of it. Articles are no exception. And just as people can manage the impression that they make through their choice of attire, so, too, can the crafting of the headline subtly shift the perception of the text that follows. By drawing attention to certain details or facts, a headline can affect what existing knowledge is activated in your head. By its choice of phrasing, a headline can influence your mindset as you read so that you later recall details that coincide with what you were expecting.”

In a series of studies, Ullrich Ecker, psychologist and cognitive neuroscientist at the University of Western Australia, more or less confirmed this sad state of affairs. One of Ecker’s studies found that when matching headlines to photographs, if the headline diverged from the photo, the victim was rated more negatively by the respondents when the headline had been about the criminal; and the criminal was rated more positively when the headline had been about the victim. Starting to sound a little bit familiar?

Read more: Gaza burns hotter than Hollywood but there’s nobody to put the fires out – George Galloway

According to Konnikova, Ecker’s findings show that misinformation causes more damage when it’s subtle than when it is blatant.

Say what you like about Fox News, but its blatant approach to lying makes it less of a threat in my mind than papers like the Guardian who advertise themselves as “editorially independent” and “free from commercial bias” as it deploys more subtle techniques to not only toe the establishment line, but to provide free public relations for states such as Israel, who regularly contravene international law in a variety of ways.

Make no mistake, the Guardian editors knew what they were doing when they released this headline. It was not done by accident. This is a tried and true strategy in which Western media will paint the aggressors in a conflict as being passive players with little fault as possible – so long as those players are the US, UK or its close allies.

For example, a March 2017 attack by US-led forces in Mosul, Iraq massacred over 200 civilians in a single bombardment. The reason this attack took place is primarily because Donald Trump relaxed the so-called Obama-era restrictions on air strikes, meaning that even Iraqi commanders could call in air strikes on the battlefield with little to no oversight. The result of this policy was of course, outright death and destruction, with over 9,000 civilians killed in Mosul alone.

However, the US bombardment in March was framed by the establishment media in the kindest way possible for the US and its allies. As noted by FAIR’s (Fairness and Accuracy In Reporting) Ben Norton, ABC News went with the headline “US Reviewing Airstrike That Corresponds to Site Where 200 Iraqi Civilians Allegedly Died.” The LA Times ran with “US Acknowledges Airstrike in Mosul, Where More Than 200 Iraqi Civilians Died.” France 24 settled for “US-Led Coalition Confirms Strike on Mosul Site Where Civilians Died.” The best, of course, was the New York Times, which managed to concoct the following headline: “US Concedes It Played a Role in Iraqi Deaths.” Remember, this is the same US who “played a role” in over one million “Iraqi deaths,” but that is a topic for another story.

Conversely, if the alleged perpetrator of violence is in the handful of countries deemed to be enemies of Western society by the mainstream media (think Iran, Syria, Russia, or North Korea), they are portrayed as menacingly evil and bloodthirsty with no logic or context to their actions. These countries “pound” their victims, for example. Even when the alleged acts cannot be proven at all, such as highly questionable chemical weapons attacks that are immediately pinned on the Syrian government with little to no evidence of Syrian government involvement, Syria’s president is condemned by all forms of Western media in the strongest terms imaginable.

You see, the victims of attacks carried out by the US, UK, and its allies and lackey states such as Israel aren’t killed, they merely die at the scene. If anything, they were in the way of the magical freedom bombs that we and our allies have been trying to spread around the Middle East for years. But those victims who are purportedly killed by countries who have been targeted for regime change, they were tragically murdered by brutal forces. The jihadists fighting against these forces with known ties to al-Qaeda are mere rebels fighting for their freedom, but militants fighting against government forces in Gaza or in Yemen are terrorists who kill noble Israeli soldiers while dying in the crossfire by accident.

While we are on the topic, an honourable mention of course has to go to the New York Times, who once felt that it was justified to describe the plight of a young Yemeni girl who had her entire family wiped out in a Saudi-led airstrike with the headline: “Young Yemeni Girl Is Sole Survivor After Airstrike Topples Her Home.” Thank God – at least it only toppled her home, as air strikes are known to do much worse if they belong to an adversarial state.

This is shameful propaganda, plain and simple. The Guardian was once heralded as a beacon of journalistic integrity, but it has long given up that status and decided it will go out of its way to perpetuate establishment narratives that benefit, for example, even the dictatorship of Saudi Arabia.

Despite this, the fact the Guardian amended its headline and deleted its original tweet can still be seen as somewhat of a partial victory. While I don’t expect many of us who spoke out to continue to keep our Twitter privileges for much longer, the end result was totally worth it and I hope more people can continue to speak out as we fight back against warmongering establishment narratives.