Veterans Day Reflection from 50 Years Ago

11 Nov 2018 – Looking back 50 years ago today, I learned two valuable lessons in nonviolence.  In Nov 1968, I was teaching at St. Francis School in Clearfield, Pennsylvania.  On Veterans Day, two other teachers and myself decided to picket the local Draft Board in protest of the escalating war in Vietnam.  So, after school around 3PM we went to the sidewalk outside the Draft Board in our usual coats and ties and began picketing: “End the War; Stop the Killing; No More Human Cannon Fodder for Empire.”

We made two strategic mistakes that day:

It turns out we were attacked by a group of drunken vets and beaten with our own picket signs. Those of us picketing did not resist.  Fortunately no one was seriously injured.  As I recall, the police showed up and loaded the drunken vets and the three of us picketers in a paddy wagon and took us to the police station.  Soon other citizens who observed the altercation arrived at the station and told police that we who were picketing were attacked by the drunken vets and that  we did not resist, or in any way taunt, or provoke the violence. In turn, the police released those of us who were picketing and asked if we wanted to press charges.  We declined to press charges but asked the police to kindly explain to the vets when they sobered up that there is such a thing as First Amendment Free Speech rights which the military is suppose to be defending.

50 years onward:  On Nov 1 and 2, 2018 myself and a few friends had to stand firm to again defend our right of free speech to picket a military public display and tours of four F-22 Raptor stealth war planes at Hilo Airport in Hawaii.  Initially the Airport Police tried to prevent us from holding signs and offering peace leaflets to those attending the public event.  Fortunately, eventually the police backed off, we were able to exercise our rights, and no one was injured.  This time no wood picket signs.

50 years onward US wars continue.  So must our nonviolent resistance.  Join the weekly Peace Vigils and other actions in your local communities wherever you are.  Below is a copy of our most recent peace vigil in Hilo, Hawaii.

A Celebration of Peace or War? 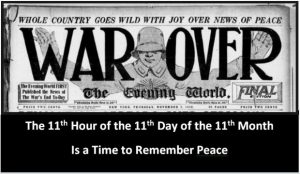 In 1938, Congress declared Armistice Day – Nov. 11th a legal holiday dedicated to the cause of world peace. In 1954 the holiday was renamed Veterans Day and morphed into an occasion for flag waving and military parades.

Nov 11, 2018 marks 100 years to the day since the end of WWI – “The War to End All Wars.” Thirty million soldiers were killed or wounded and another seven million taken captive during World War I. Some 50 to 100 million perished from a flu epidemic created by the war.

Members of the group Veterans for Peace are working across the U.S. to recover the original purpose of Armistice Day. They are using it to call for adequate psychological and material support for veterans, to help them cope with the terrors they have been forced to endure. Above all, they work to abolish wars, not glorify wars. What lesson do we want to teach our children? To become a “hero” by going off to kill or be killed in future wars, or to dream of becoming peacemakers?

Let’s be clear, Veterans Day, like Armed Forces Day, has less to do about honoring the sacrifices of troops than it does about recruiting the next generation of soldiers to be used as cannon fodder in future wars of empire. It’s time once again to remember and celebrate peace, not make more wars!

Kathy Kelly of the group Voices for Creative Nonviolence says “Armistice Day gives us an opportunity to acknowledge the brutal futility of armed conflict, the wastefulness of our military spending, and the responsibility we share to abolish all wars.”

Thank you for your service in refusing to Kill!