COP24: How a Plastics Treaty Could Clean Up Our Oceans

3 Dec 2018 – It seems new action to tackle plastic pollution is announced every week, from the 5p plastic bag charge to governments debating a tax on plastic packaging. Businesses are also showing their green credentials as major supermarkets pledge to reduce plastic packaging alongside some multinational companies.

With such serious steps, it looks like our problem with plastic will soon be fixed. Before we get too excited though, other recent news stories include billions of dollars being invested in new plastics refineries and plastics being found everywhere, including in our soil.

It’s estimated that 4.8–12.7m metric tonnes of plastic enters the ocean from land-based sources annually. That’s everything from toothbrushes to microplastics worn off vehicle tyres. The plastics found in the ocean come from every country in the world and if we are to tackle it we need a worldwide solution.

Like COP24 for climate change, an international summit for plastic pollution could achieve just that.

Getting the world to recycle

We do have some international laws that attempt to tackle plastic pollution. The UN Convention on the Law of the Sea contains a commitment to “prevent, reduce and control pollution from land-based sources” which covers plastics. More recently, the Honolulu Strategy was agreed in 2011 to help tackle marine debris coming from land-based activities. If these commitments were to be fully met then our plastic problem would be vastly reduced.

One issue is that these obligations depend on plastic being recognised as harmful to humans or marine life. Plastic has long been considered a wonder material, which makes modern life possible. Like other “wonderful inventions” such as the ozone-eating CFCs, it is only as plastic has started to accumulate in the world that we have realised it is a problem.

A second issue is that each country has responded to this problem in different ways. Kenya, for example, has adopted legislation banning single use plastic bags, while the UK has added a charge to their use. 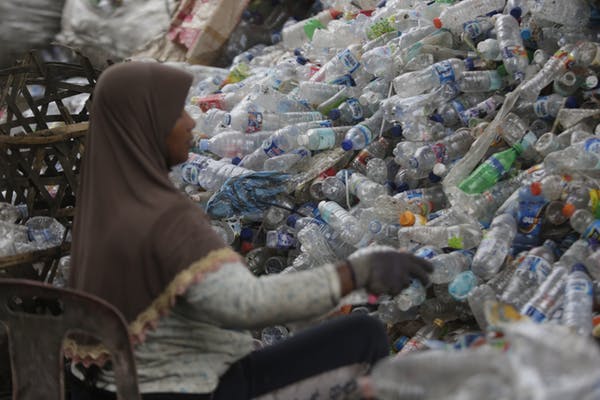 A worker sorts plastic for recycling at a dumpsite in Indonesia. Hotli Simanjuntak/EPA

Current proposals to tackle plastics focus on increasing recycling. It is worth remembering though that only around 11% of plastic is currently recycled around the world. If we are to rely on recycling as a means to tackle plastic pollution we need to rapidly increase recycling in almost every country.

An increase in recycling to the extent needed can’t happen overnight. We’d need effective and accessible recycling facilities and public education. Both would need huge investments of time and resources across the world.

A treaty may be one way of coordinating such action and sharing knowledge about how best to improve recycling. Countries already share knowledge about how they meet some treaty obligations through reports to a governing body on climate change, a similar approach could be taken in a plastics treaty.

Another measure being used is taxation. The assumption is that if we make plastics more expensive then either less will be used or alternative materials will replace them. Deposit return schemes are also suggested as a way to “nudge” producer and consumer behaviour. These types of measures do not always, however, prompt the desired response.

Sometimes, for example, costs are simply passed on to consumers. It is also difficult to apply these measures in emerging economies which lack the same regulatory bodies and infrastructure to monitor these measures, so other approaches may be needed.

Governments have faced the question of how to tackle a pervasive pollutant produced by all countries before and the answer was to adopt a treaty for a rapid and coordinated response. The best known example is the Ozone Convention which was adopted in 1985 to reduce chemicals used in refrigeration and aerosols which damaged the ozone layer.

Like subsequent treaties addressing other harmful chemicals, such as the POPs Convention, the Ozone Convention tackled the most harmful first and was designed to enable alternatives to be introduced. Alternatives to harmful plastics do already exist – current plastics are largely derived from oil and so do not easily degrade.

Alternative plastics are being developed from prawn shells and from plants such as seaweed which will degrade more easily.

Ban the unnecessary, phase out the rest

World leaders have called for action on plastics. It’s time to follow through with a “plastics convention”, containing binding commitments to phase out and prevent future plastic pollution.

A plastics convention could ban oil-based plastics in a similar way to the ban on ozone-eating chemicals. Single use bags and straws could be phased out almost immediately under a global treaty, with other plastics addressed over a longer time frame. Those used in medical surgery may take decades to phase out, but support could be provided to industry to develop bioplastics, or other alternatives to plastics. 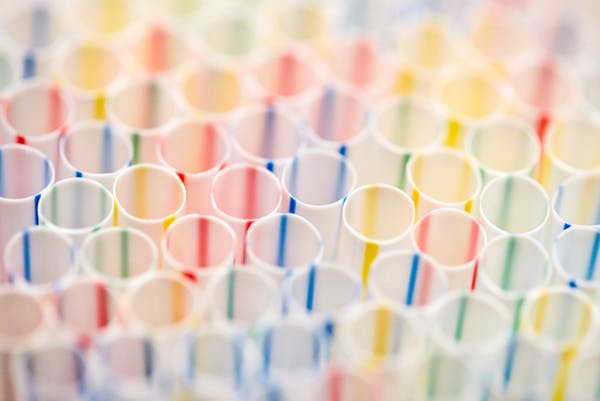 Plastic straws are among the first plastic products we should ban.
Hayoung Jeon/EPA.

A treaty could also address gaps in the current law. There is, for example, no provision for cleaning up the plastics already in the ocean. A new treaty could provide for a clean up fund to address these “legacy” plastics.

The public are clearly supportive of action to tackle plastic pollution and alternative materials are being developed that could replace oil-based plastics. A treaty negotiated by the world’s governments would allow us to take coordinated action against oil-based plastics.