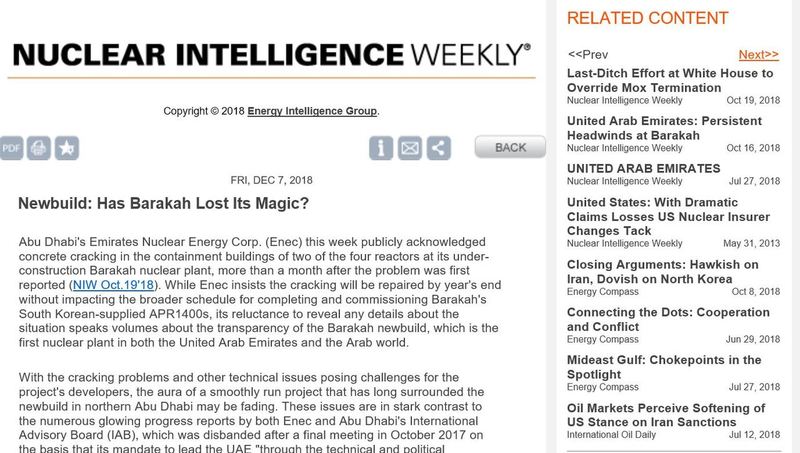 Christer Viktorsson, director general of the UAE’s Federal Authority for Nuclear Regulation (FANR), said that grease had been found on the wall of the third unit’s containment building during an interview with US trade journal Energy Intelligence on Nov. 21.

17 Dec 2018 – There may be cracks in the containment building at the third unit at the Barakah nuclear power plant that South Korean companies are building in the United Arab Emirates (UAE). The grease inserted into the concrete walls as a lubricant has seeped into voids on the outside of the wall. Shoddy construction work is likely to push back the schedule and increase costs.

In an interview with American trade journal Energy Intelligence on Nov. 21, Christer Viktorsson, director general of the UAE’s Federal Authority for Nuclear Regulation (FANR), said that grease had been found on the wall of the third unit’s containment building last year.

“Grease started to flow out of unexpected areas. Workers found voids in one place,” Viktorsson said. Viktorsson was interviewed in an article titled, “Newbuild: Has Barakah lost its magic?” on Dec. 7. 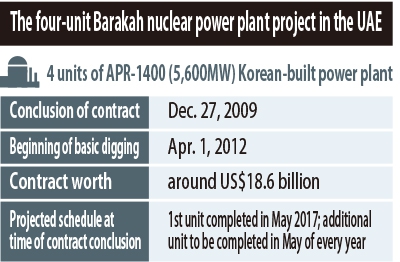 The four-unit Barakah nuclear power plant project in the UAE

Rather like South Korea’s Nuclear Safety and Security Commission (NSSC), FANR is a federal government body that manages and overseas the Emirates Nuclear Energy Corporation (ENEC).

The grease leak raises the possibility of a crack, which would be a more serious issue than the previously reported voids. To enable the 100-120cm thick walls of the containment building to endure internal pressure resulting from trouble inside the reactor, a number of metal cables called tendons are buried inside the walls. This involves the technique of post-tensioning, in which tension is added to the walls by stretching cables inserted into steel tubes after the concrete has set. To facilitate this process, grease is poured into the tubes.

The discovery of grease on the external wall, therefore, means that there could be a crack in the wall. This is not a simple problem: a similar issue was detected in August at unit four of the Hanbit Nuclear Power Plant in Yeonggwang, South Jeolla Province, and workers are still trying to find the origin of the grease leak. Energy Intelligence quoted an industry expert as saying that there could be a “leakage path” from the tendon to the concrete wall and concluded that the technical problems during the construction of the UAE nuclear plant have been greater than expected.

Officials from the UAE have said that an investigation into the cause of the leak and additional work are underway. On Dec. 4, ENEC officially acknowledged on its website that voids had been discovered at units two and three of the Barakah nuclear plant. This was the first time that ENEC had publicly admitted the existence of the voids, about two months after Kim Jong-gap, CEO of Korea Electric Power Corporation (KEPCO), testified during a parliamentary audit on Oct. 16 that voids had been found at the UAE nuclear plant.

In addition to the companies on the “Korean team” (including KEPCO, Hyundai E&C and Samsung C&T), ENEC said that “independent concrete experts” with which it has a contract had also taken part in the investigation.

In an official position statement, ENEC said that “the repairs at Barakah units two and three are not expected to have an impact on the nuclear plant construction project.” But the original goal for completing work on unit three is the end of the year, just two weeks away. A considerable amount of extra money and time have already been spent on checking for voids on all four of the units at the power plant.

Furthermore, ENEC and KEPCO’s contract states that a fee of US$600,000 a day will be assessed if the contract is delayed. Despite the arguments of some members of the nuclear power industry that the UAE nuclear plant project has been undermined by the nuclear power phase-out, it appears that technical problems during the construction have fueled concerns about the construction schedule being delayed and the cost increasing.

“Before we give them the operating permit, [South Korea] has to fix this problem,” Viktorsson said during the interview.