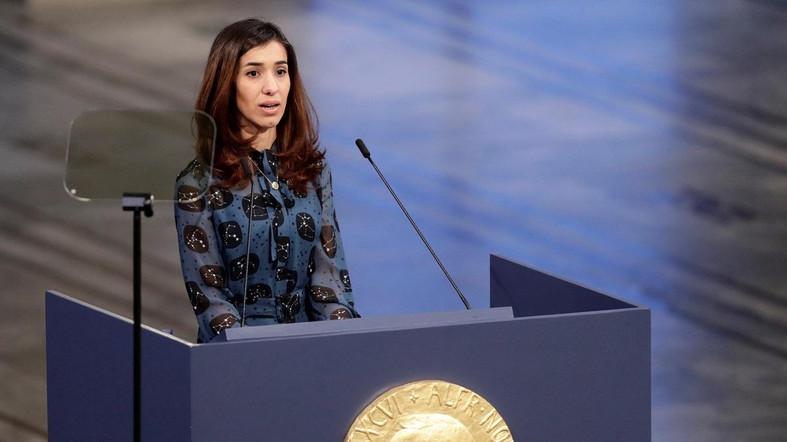 The Yazidi survivor was speaking to a crowd of hundreds in Sinjar, her hometown in northern Iraq. (Reuters)

15 Dec 2018 – Nadia Murad, an Iraqi Yazidi woman held as a sex slave by ISIS militants who won this year’s Nobel Peace Prize, said on Friday [14 Dec] she intended to use the prize money to build a hospital for victims of sexual abuse in her hometown.

The Yazidi survivor was speaking to a crowd of hundreds in Sinjar, her hometown in northern Iraq.

“With the money I got from the Nobel Peace prize, I will build a hospital in Sinjar to treat ill people, mainly widows and women who were exposed to sexual abuses by Islamic State militants,” she told the crowd and gathered journalists.

She thanked the Iraqi and Kurdistan governments for agreeing to her plan and said she would be contacting humanitarian organizations “soon” to start construction.

Murad was awarded the $1 million prize alongside Congolese doctor Denis Mukwege for their efforts to end the use of sexual violence as a weapon of war and armed conflict.

She was one of about 7,000 women and girls captured in northwest Iraq in August 2014 and held by Islamic State in Mosul, where she was tortured and raped.

She escaped after three months and reached Germany, from where she campaigned extensively to appeal for support for the Yazidi community.

The Yazidi area in Sinjar had previously been home to about 400,000 people, mostly Yazidis and Arab Sunnis.

In a matter of days, more than 3,000 Yazidis were killed and about 6,800 kidnapped, either sold into slavery or conscripted to fight for Islamic State as the religious minority came under attack.

Nadia Murad, born 1993 in Kocho-Iraq, was awarded the Nobel Peace Prize 2018 “for her efforts to end the use of sexual violence as a weapon of war and armed conflict.”