Sheikh Sayakh Will Go to Prison, the Disgrace to His Judges

5 Dec 2018 – Sheikh Sayakh is about to be imprisoned for ten months, having been sentenced for trespassing and entering public property in violation of the law on state lands. And here, this criminal wins the support of human rights and co-existence activists. Naturally one asks why we support a person whom an Israeli court regards as a criminal deserving of a ten-month prison sentence and a fine of tens of thousands of shekels. In order to understand this, the story of this case must be told:

In 1905 Sheikh Sayakh’s great grandfather purchased land from a member of the Al Uqbi tribe in the Al Araqib area. In 1914, members of his tribe, Al Turi, not only resided there but began to use a small plot of land to bury their dead. In 1952 the Israeli military governor came to their village and told the elder (Sheikh) at the time that the army intends to hold maneuvers in the area, and that they must leave for their own safety. He promised that half-a-year later, after the maneuvers are concluded, they will be able to return to their land. When they wished to do so, they were told they could return only if they lease the area from the state. They refused. This is their own land, why should they lease it? Apparently the Israeli Knesset passed the 1953 law on purchasing land, which stipulated among other things that lands not in use at the time of this legislation would become state property. Thus, with the help of the army and legislation, the state robbed Sheikh Sayakh’s land, as it had in many other cases. As far as I know, the victims of this law were always only Arab citizens of Israel, never Jews… 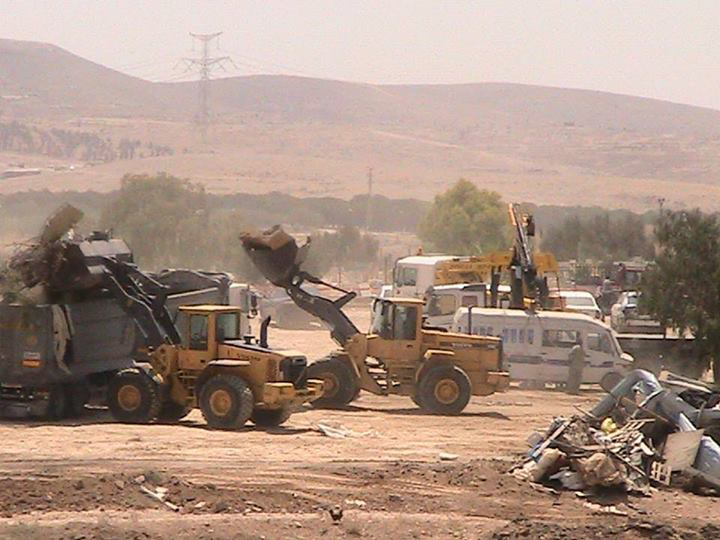 The story proceeds with two versions: the state claims that in the late 1990s Sheikh Sayakh and his people invaded the area and founded their village. Sheikh Sayakh claims that they had always maintained their connection and use of the land.

In the late 1990s the state began to destroy Al Araqib’s grain crops and demolish homes in the village. In July 2010 they demolished the entire village for the first time. Since then the state has demolished over 130 times the light construction that emerges after every demolition. Alongside the demolitions, the state has resorted to law suits against the Sheikh and his people. This has now entailed a prison sentence and heavy fine. All this has taken place while the issue of ownership of the land is still being reviewed in court and not decided yet.

The state has an army and police force and the power to legislate as it pleases. There are two matters that it cannot control, however: justice and morality.

Sheikh Sayakh is on trial for not willing to accept the robbery of his lands and the expulsion of his village members from their land by the state that expelled them from their own village in 1952. He returned to his village and land and reconstructed it. The state now comes and demolished the village time and again and tries to expel Sheikh Sayakh and his people from the village. It has now charged and convicted him for invading the very lands it robbed from him. It is the state that is disgraced by prosecuting him and the judges who ruled by the robbers’ laws and against justice and morality.

Amos Gvirtz is founder of Israelis and Palestinians for Nonviolence, was chairperson of the Committee against House Demolitions, and a peace and human rights activist. He is a former Israeli representative to the International Fellowship of Reconciliation (IFOR) and wrote the book, Don’t Say We Did Not Know (working on the translation to English).

Anticopyright: Editorials and articles originated on TMS may be freely reprinted, disseminated, translated and used as background material, provided an acknowledgement and link to the source, TMS: Sheikh Sayakh Will Go to Prison, the Disgrace to His Judges, is included. Thank you.