15 Feb 2021 – The International Criminal Court in The Hague has approved its jurisdiction to investigate Israelis and Hamas members on the suspicion of war crimes! Let’s hope that this decision will begin to provide protection to the defenseless populations living under the Israeli occupation, and that the Israeli army will cease from actions which undermine its status as a legitimate army.

15 Jun 2020 – There are many reasons for opposing Netanyahu’s plan to annex settlements and the occupied Jordan Valley. I would like to focus on the implications of one of its important aspects: the intention to annex territories without granting citizenship to Palestinian residents, placing the discrimination between Jews and non-Jews on legal ground and providing ideological and legal justification for similar discrimination against Jews in other parts of the world.

28 Jan 2020 – Throughout Israel’s existence its various governments have regarded members of Israel’s Bedouin population as undesirable citizens: after initially expelling most of them from the country, the state concentrated those that remained in the Sayag area and after that in townships. It is generally assumed that citizenship offers protection to citizens. But what happens when citizenship withholds protection? Where is the civil rights movement in Israel? Where are the civil rights movements in the rest of the world?

21 Oct 2019 – If Israel wants to survive, then it must return to the Obama plan: to choose the road of peace while we still enjoy the support of the United States, so that we can arrive at a peace agreements that will dramatically reduce the security threat to our existence and our dependence on the superpowers. 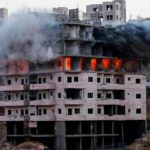 28 May 2019 – The German Bundestag’s decision to brand the activities of the BDS (Boycott, Divestment and Sanctions) as anti-Semitic is in my opinion misguided, for two main reasons: the lessons of World War II and the question of nonviolent versus violent struggle. Israel has officially drawn two particular lessons from the Holocaust: “Never again”, and “We are allowed to do anything and no one is permitted to criticize our actions.” 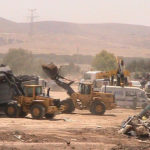 5 Dec 2018 – Sheikh Sayakh is about to be imprisoned for not accepting the robbery of his lands and the expulsion of his village members by the state of Israel that expelled them in 1952. He returned to his land and reconstructed it. The state demolished the village 130 times trying to expel Sheikh Sayakh and his people from the village. It has now charged and convicted him for invading the very lands it robbed from him.

This Is Not Law Enforcement – It Is a War Crime
Amos Gvirtz – TRANSCEND Media Service, 22 Oct 2018

17 Oct 2018 – This one-sided war that the Israeli army is waging against the Khan Al-Akhmar civilian population includes: widespread land robbery; relentless destruction of houses; establishing settlements on stolen land, then expanding them; deportations; stealing water and quarry sources; preventing the return of Palestinians; preventing unification of families; preventing entry of visitors. These are not connected in any way to national security but with Israel’s project of territorial expansion.

How Criminalization of the Victim Is Done
Amos Gvirtz – TRANSCEND Media Service, 17 Sep 2018

11 Sep 2018 – It is quite remarkable to trace the process of criminalizing the victim and to examine this process as it plays out in the case of the Bedouins of the Negev. For hundreds and perhaps thousands of years the Bedouins have lived in the Negev where the desert climate forced most if not all of them to develop a nomadic, and over the course of time, a semi-nomadic lifestyle, remaining sedentary during the rainy season.

25 Jul 2018 – The Israeli government is planning to demolish the village of Khan El Akhmar, next to the settlement of Kfar Adumim. This is a unilateral act of war by an army against a defenseless civilian population, contrary to international law. The security activities of the Israeli army in the occupied territories stem from the need to suppress Palestinian resistance to their ouster from their land, and to protect Israeli citizens from Palestinian revenge over their abuse by the army and the settlers.

Why I Stopped Being a Zionist
Amos Gvirtz – TRANSCEND Media Service, 28 May 2018

The breaking point for me in relation to Zionism came in the beginning of 1997. The Israeli army demolished the houses and evacuated Palestinian-Bedouin inhabitants of the Jahalin tribe in order to expand the settlement of Ma’ale Adumim. This was during the period of the Oslo peace process.

23 Apr 2018 – Will Gaza’s nonviolent struggle be a turning point? Israel has always cited the murderous struggle waged by the Palestinian terror organizations as justification for its policies, but now Gaza has chosen to explore the option of nonviolence.

The Israeli newspaper Ha’aretz has reported that 2,220 Bedouin homes were demolished in 2017! This means that, in the Negev, the government of Israel is waging a unilateral war against its Bedouin citizens. It euphemistically calls the war “law enforcement.”

So yes, the occupation corrupts and continues to corrupt. You won’t see civil society organizations fighting against this official corruption. Nor will you see popular protests against this ongoing scandal. And the lonely few who are still outraged by this scandalous behavior are, here in Israel, called leftist extremists and traitors…

8 Jan 2018 – In 1953 the Israeli Knesset (parliament) passed the land purchase law which stipulated, among other things, that lands not used for a certain period of time determined by the law itself were to become “state lands”. People were thus evicted and their lands taken over by the state. This was simply land-grab through legislation. In addition, the state no longer recognizes traditional ownership of land.