Criminalization of the Bedouin Victim 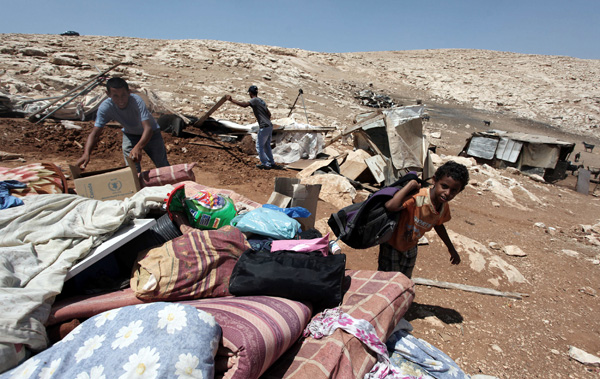 Palestinian Bedouins search in the rubble of their damaged tents after it was dismantled by Israeli bulldozers under the pretext of building without permits at al-Baq’a camp near the West Bank city of Jericho. Photo by Issam Rimawi

29 Nov 2021 – For some time, there has been an intensification of the media campaign against the Bedouin community in the Negev, fed by actual criminal acts committed by Bedouins. This campaign does not publicize crimes perpetrated by Bedouin criminals against other Bedouins in their own communities – a significant fact because most of crime among the Bedouins occurs within the Bedouin settlements themselves and is directed against other Bedouins.

This campaign seeks to prevent the ongoing and abiding harm perpetrated by the Israeli government against the Bedouin minority in the Negev from coming to public attention. It began in the 1948 War of Independence with the deportation of most of the Bedouins who lived in the Negev to neighboring Arab countries. At the end of the war in 1949 these deportations of Negev Bedouins continued until they finally ended in 1959. Alongside these deportations, internal deportations were carried out as well with tribes being transferred from their lands to the Sayag area (south of the West Bank) and their lands appropriated. Furthermore, the state did not recognize the Bedouin villages, and more seriously, neither did it recognize the villages that the state itself had created following the transfer of tribes to the Sayag area, creating a situation in which it is impossible to build legally.  So, this created a situation in which all building in Bedouin villages is illegal, and to add insult to injury, Bedouins were barred by the state from almost all grazing land.

Since the end of the 1960s, the policy in force is to concentrate all the Bedouins of the Negev into towns which comprise the most condensed area in which it is possible to squeeze an unwanted population. The state continues to create internal refugees! To encourage them to move to these towns, in addition to denying them municipal services, running water and electricity, houses are demolished and crops destroyed.

One of the major areas of contention for the Israeli government concerning the Negev Bedouins is the question of land ownership. In the past, the Bedouins divided the Negev among clans (each one included a collection of tribes), each with territory under its control. Some of the land was owned and the rest was grazing land. In 1858 the Ottoman government passed the Ownership Land Code which required land owners to register ownership with the Land Registry Office. So as to avoid paying taxes, many in the area and especially in the Negev refused to comply: they continued to rely on the traditional land laws. Israel, relying on the Ownership Land Code, completely disregards traditional ownership so as to avoid recognizing Arab and Bedouin ownership of their lands. The government declares areas as state land and if the owners dare to appeal to the Israeli courts in their efforts to retain ownership, they discover that the Israeli courts also do not recognize traditional ownership as sufficient proof of ownership. If the owner refuses to relinquish his land, he is declared a trespasser on state lands.

Israel has inflicted terrible disasters on the Negev Bedouins. By means of legislation and actions taken by the government, it has quite simply destroyed the Bedouin way of life.  Today Bedouins who wish to preserve their traditional way of life in Israel, have become criminals in the eyes of the law! They only become legal if they agree to leave their traditional settlements and their land and move to the towns which the government has built for them. Oh yes, there are indeed seven such Bedouin towns in the Negev – in which sixty percent of the Bedouin population live – some of the poorest in the land, with high unemployment and high crime rates. So in effect the project of concentrating the Bedouins into towns has failed. Only this failure is not a reason to change policy…

As with every society or people, we see ourselves as the “goodies” (a priori) in a dispute (in this case with the Bedouin minority) and the other side as the “baddies”. To enable us to believe this, there is a process in place which I call criminalization of the victim. To this end, an ongoing media campaign presents Bedouins as criminals while covering up the harm that the Israeli government inflicts on them. And indeed, in a society such as the Bedouins, fragmented and discriminated against, there is a high crime rate – mostly internal – but the Hebrew-language media give prominence only to the crimes against Jews. All this while turning a blind eye to more than 2500 Bedouin structures that the Israeli government demolished during 2020 (influenced by the Kaminitz Law, mostly self-demolitions) and to the more than 14,000 dunams of agricultural crops belonging to Bedouins destroyed by the Israeli government, without almost any media coverage.

Dear readers, try and imagine how we would react if some country in the world would harm its Jewish minority in this way.

Amos Gvirtz is founder of Israelis and Palestinians for Nonviolence, was chairperson of the Committee against House Demolitions, and a peace and human rights activist. He is a former Israeli representative to the International Fellowship of Reconciliation (IFOR) and wrote the book, Don’t Say We Did Not Know. It is live in the Amazon store and is available for readers to purchase here. In Kindle you can read it for free.

Anticopyright: Editorials and articles originated on TMS may be freely reprinted, disseminated, translated and used as background material, provided an acknowledgement and link to the source, TMS: Criminalization of the Bedouin Victim, is included. Thank you.