The Stockholm Agreement marks a much-needed breakthrough on Yemen, but there are major issues with its provisions. 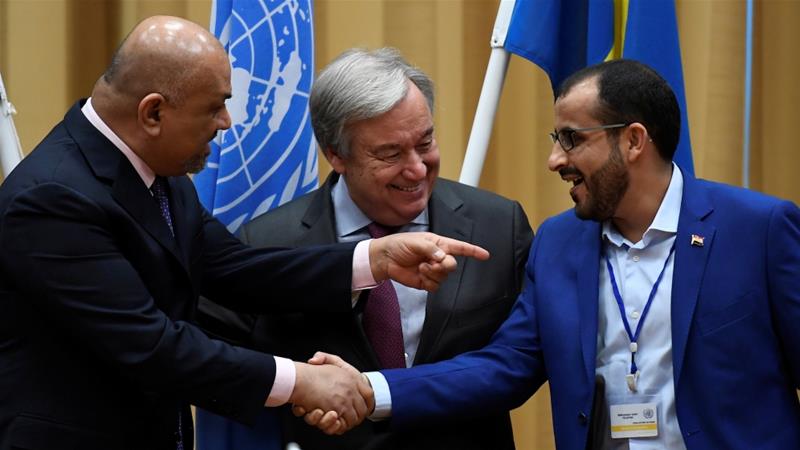 19 Dec 2018 – More than two years after talks between the internationally recognised Yemeni government and the armed Houthi movement collapsed in Kuwait, the two warring sides finally sat down for another round of negotiations.

UN Special Envoy for Yemen Martin Griffiths managed to bring the two sides together for a week of talks in Rimbo, Sweden, which resulted in the announcement of a break-through agreement.

The document includes three provisions: a ceasefire along the Hodeidah front and the redeployment of armed forces out of the city and its port; an agreement on prisoner exchange; and a statement of understanding on the Yemeni city of Taiz.

For the 12 million Yemenis on the cusp of famine and for the country as a whole, this was a much-needed positive step towards peace. But it must be recognised that the agreement has some major limitations and much effort has to be made to secure its implementation.

The good and the bad in the Stockholm agreement

The ceasefire is a highly significant development given that Hodeidah’s port is the entry point for most of Yemen’s food imports, commercial goods and humanitarian aid; currently the country relies on imports for some 90 percent of its food and basic commodity needs.

This also marks the first time that Houthi forces have agreed to withdraw from one of the conflict’s most significant front lines. This makes the agreement seem “too-good-to-be-true”, and indeed, this may turn out to be the case. Various points in the agreement are vaguely worded and open to different interpretations by the warring parties. For example, it talks of “the mutual redeployment of forces from the city of Hodeidah and the ports of Hodeidah, Salif and Ras Issa”; the Houthis interpret this as removing military presence but not withdrawing, while the other side think that the Houthis should withdraw fully. This will be a key point of contention in the coming months.

Furthermore, the timeline of implementation is unreasonably tight. It was agreed that the ports shall be handed over within 14 days of the agreement (December 31) to local police and authorities and city – within three weeks (January 7, 2019). This time might not be enough for the Houthis to withdraw and it is also unclear to what authority they are supposed to handover the city.

Another challenge is the fact that Houthi forces and their affiliates have become highly entrenched in Hodeidah. Even if and when Houthi military forces make their exit, the handover of power would not be achieved immediately as local security forces – such as the police – are full of Houthi partisans and sympathisers. Dismantling these unofficial networks to re-balance civilian power will be difficult and will need to be approached carefully.

Under the Stockholm Agreement, the Redeployment Coordination Committee (RCC) will be tasked with addressing such issues, with the committee comprised of representatives from both warring parties and headed by UN officials. The international community should closely monitor the work of the RCC to limit the influence of spoilers and bolster the UN’s authority and capacity to push for the tangible steps necessary to implement the agreement.

The agreement on prisoner exchange  and the statement of understanding on Taiz are also important. Agreeing on an executive mechanism for a prisoner swap is crucial to building confidence between the two parties. The release of prisoners will make a difference for thousands of Yemeni families, given that most people held by the Houthis are civilians imprisoned with no clear justification.

Making progress on Taiz is crucial, but the provision in the agreement, which calls for the formation of a joint committee from both sides of the conflict and the Yemeni civil society to determine the working mechanisms for upcoming consultations has not really resulted in any real action on the ground.

Another major downside of the Stockholm consultations is that they failed to reach an agreement on two other key issues: the reopening of Sanaa International Airport and the reunification of Central Bank of Yemen, which was split along conflict divide in September 2016.

These issues – along with the prisoner exchange – were central to the initial agenda of the Sweden peace talks, and reaching an accord on them would have had direct implications for both the economic and humanitarian crises in Yemen. By contrast, the most significant outcomes of the negotiation – those related to Hodeidah – were on the original agenda. Agreement on them was reached on the very last day of the talks.

How did the agreement come about?

It is worth pointing out that the success of the negotiations – partial as they maybe – would not have happened had the international community not pushed for it. This came at the tail of years of inaction and apparent lack of political will on the international level to push for a solution in Yemen. The war has been raging on for more than three years and for almost two it has been declared the world’s largest humanitarian crisis by the UN.  In September, when UN envoy Griffiths attempted to bring the belligerents together in Geneva he failed. So why and how did he succeed in December?

One of the main reasons seems to be that the killing of Saudi journalist Jamal Khashoggi  at the Saudi consulate in Istanbul in early October finally pushed many Western governments to shift their position on Riyadh and its intervention in Yemen.

Previously, the calculation in Western capitals seemed to be that business contracts with Saudi Arabia and the United Arab Emirates – Riyadh’s largest partner in the coalition campaign in Yemen – outweighed any humanitarian concerns. With the global media frenzy following the Khashoggi killing, and in turn the attention this brought to the Saudi-led military campaign in Yemen, continued Western support for Riyadh and Abu Dhabi became domestically less palatable for many politicians.

Most importantly, the coalition’s largest backers, the United States and the United Kingdom, began calling for a ceasefire in the Yemen war. Following this the US also ended its in-flight refuelling of Saudi-led coalition aircraft operating over Yemen, and US legislators have been forcefully pushing for the withdrawal of all military support to the Saudi-led campaign.

The US, and more so the UK, who previously hindered prospects for any new Yemen resolution at the United Nations Security Council, have shifted their positions dramatically. London in particular has begun to play a positive role in ending the conflict. The British mission to the UNSC has been crafting a new UN resolution calling for a ceasefire in Hodeidah and guarantees of safe passage for delivery of food and medicine and British Foreign Secretary Jeremy Hunt attended the peace talks in Sweden.

Moving forward, the international community needs to capitalise on the current momentum. This means both continuing to pressure the Saudi regime to end the conflict, while avoiding implicitly legitimising the armed Houthi movement’s control of areas in northern Yemen. Houthi oppression of the population and their syphoning off of state revenues to fund their war effort must be raised during future negotiations and addressed.

Too often, the international discourse on the war in Yemen has been characterised by oversimplification, and consistent failures to capture the inherent complexities of the conflict on the ground. To ensure and sustain peace in Yemen, peace agreements must serve the interests of the Yemenis and reflect their local dynamics and structures. In this sense, the Stockholm Agreement should be seen as a good start, but the hard work of securing peace in Yemen is only beginning.

Osamah Al-Rawhani is a Yemeni researcher based in the UK and Program Director of Sana’a Center for Strategic Studies.