The Man Who Lives without Money 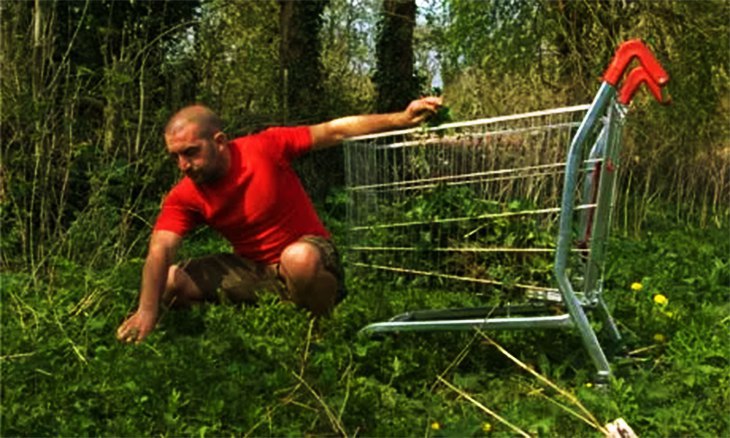 Many of us think we couldn’t live without money but Irishman Mark Boyle has a different belief about the best things in life. Here’s how he finds life without spending, with no income and zero bank balance.

“If someone told me seven years ago, in my final year of a business and economics degree, that I’d now be living without money, I’d have probably choked on my microwaved ready meal.”

According to Boyle, the plan back then was to ‘get a good job’, make as much money as possible, and buy the stuff that would show society he was successful.

Like most individuals raised in a consumer-driven society, he never second guessed those goals. For a while he had a fantastic job managing a big organic food company and even had a yacht in the harbor. If it hadn’t have been for the chance purchase of a video called Gandhi, he’d still be pursuing the same life.

“I’d still be doing it today. Instead, for the last fifteen months, I haven’t spent or received a single penny. Zilch”.

The change in life path came one evening on the yacht while philosophizing with a friend over a glass of Merlot. “Whilst I had been significantly influenced by Mahatma’s quote “be the change you want to see in the world”, I had no idea what that change was up until then.”

The two friends began talking about all the major issues in the world – environmental destruction, resource wars, factory farms, sweatshop labor – and wondered which of the issues they could best devote their time to. Mark didn’t feel he could really make any difference, however “being two small drops in a highly polluted ocean”. 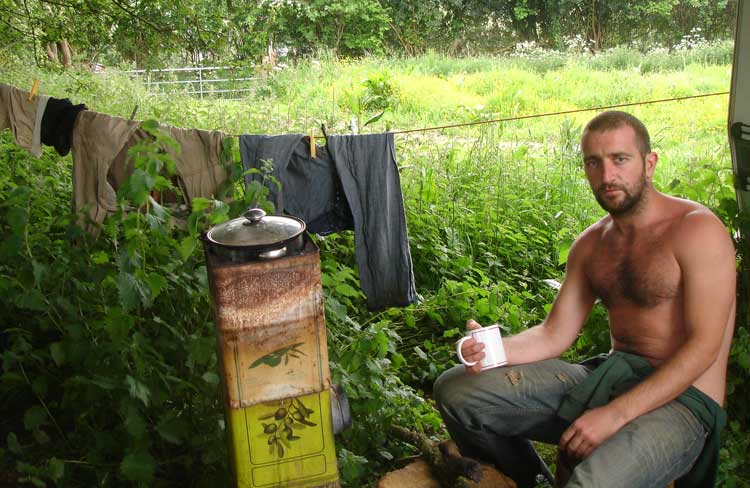 That evening, though, a revelation came through: “These issues weren’t as unrelated as I had previously thought – they had a common root cause. I believe the fact that we no longer see the direct repercussions our purchases have on the people, environment, and animals they affect is the factor that unites these problems.”

Boyle believes that the degrees of separation between the consumer and the consumed have increased so much that it now means most people are completely unaware of the levels of destruction and suffering embodied in the ‘stuff’ they buy.

It can be agreed that few people actually want to cause suffering to others; most just don’t have any idea that they directly are. The tool that has enabled this separation is money, especially in its globalized format.

“If we grew our own food, we wouldn’t waste a third of it today” is one of Mark’s examples as to why it’s important a reconnection with natural/source living is established. “If we made our own tables and chairs, we wouldn’t throw them out the moment we changed the interior décor. If we had to clean our own water, we probably wouldn’t shit in it”.

The above arguments all honestly assess the undervalue most objects now have. With convenience at our fingertips, most don’t consider where their trash product or unwanted items go.

Deciding to be the change, this then spurred Mark to fully dive into his new viewpoint and give up money, which he only planned on doing for a year. “I made a list of the basics I’d need to survive. I adore food, so it was at the top. There are four legs to the food-for-free table: foraging wild food, growing your own, bartering and using waste grub, of which there are far more”.

On his first day, he fed 150 people a three-course meal with waste and foraged food. For himself, however, he ate his own crops and waste only made up about 5% of his diet. “I cooked outside – rain or shine – on a rocket stove”.

The next concern was shelter. He found himself a caravan from Freecycle, parked it on an organic farm he volunteered with, and renovated it out to be off the electricity grid. I’d use wood I either coppiced or scavenged to heat my humble abode in a wood burner made from an old gas bottle, and I had a compost loo to make ‘humanure’ for my veggies”. Up front and to the point, Boyle clearly understood the necessity of using every available resource to be most sustainable. 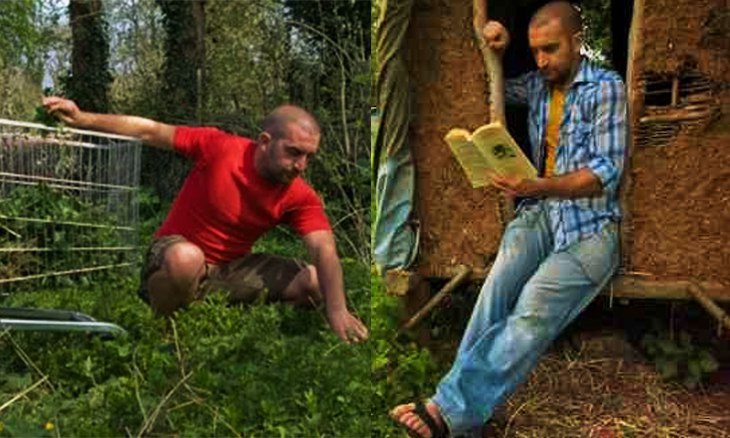 “I bathed in a river, and for toothpaste I used washed up cuttlefish bone with wild fennel seeds, an oddity for a vegan. For loo I’d relieve the local newsagent of its papers (Once I wiped my arse with a story about myself); it wasn’t double quilted but it quickly became normal”. For transportation, Mark used his bike and trailer, using the 55 km commute to the city as an alternative solution for the gym. Beeswax candles served as his lighting.

Humorously inspiring to some, deluded and anti-capitalist to others, Mark had this to say about his radical lifestyle: “Many people label me as anti-capitalist. Whilst I do believe capitalism is fundamentally flawed, requiring infinite growth on a finite planet, I am not anti anything.” More than anything, Boyle claims to be pro-nature, pro-community, and pro-happiness. How often is that a city dweller’s life philosophy?

“And that’s the thing I don’t get – if all this consumerism and environmental destruction brought happiness, it would make some sense. But all the key indicators of unhappiness – depression, crime, mental illness, obesity, suicide and so on are on the increase.” More money, it seems, does not equate to more happiness. (See Documentary: Happy)

Another positive effect of Mark’s unique lifestyle is the joy he has created for himself. “Ironically, I have found this year to be the happiest of my life. I’ve more friends in my community than ever, I haven’t been ill since I began, and I’ve never been fitter. I’ve found that friendship, not money, is real security. That most western poverty is spiritual, and that independence is really interdependent.”

Mark’s example certainly stands as inspiration for those seeking freedom from the fast-paced modern age; most alternative media sources would agree that the more one reconnects to nature, the better their mental, physical, and spiritual health is. However, could everyone live like this? According to Mark, no.

“It would be a catastrophe, we are too addicted to both it and cheap energy, and have managed to build an entire global infrastructure around the abundance of both.”

The prospect of gradually transitioning to re-localized, small communities is a possibility, though. With greener energy sources and healthier communities being implemented at a growing rate, natural living is already a reality, but may be made much more mainstream in the future to come.

“For over 90 percent of our time on the planet, a period when we lived much more ecologically, we lived without money. Now we are the only species to use it, probably because we are the species most out of touch with nature.”

Asked what was missing from his old world of lucre and business, Mark replied “Stress. Traffic-jams. Bank statements. Utility bills. Oh yeah, and the odd pint of organic ale with my mates down at the local”.

It just goes to show, if you are passionate about anything, you can be that change you’d like to see in the world.