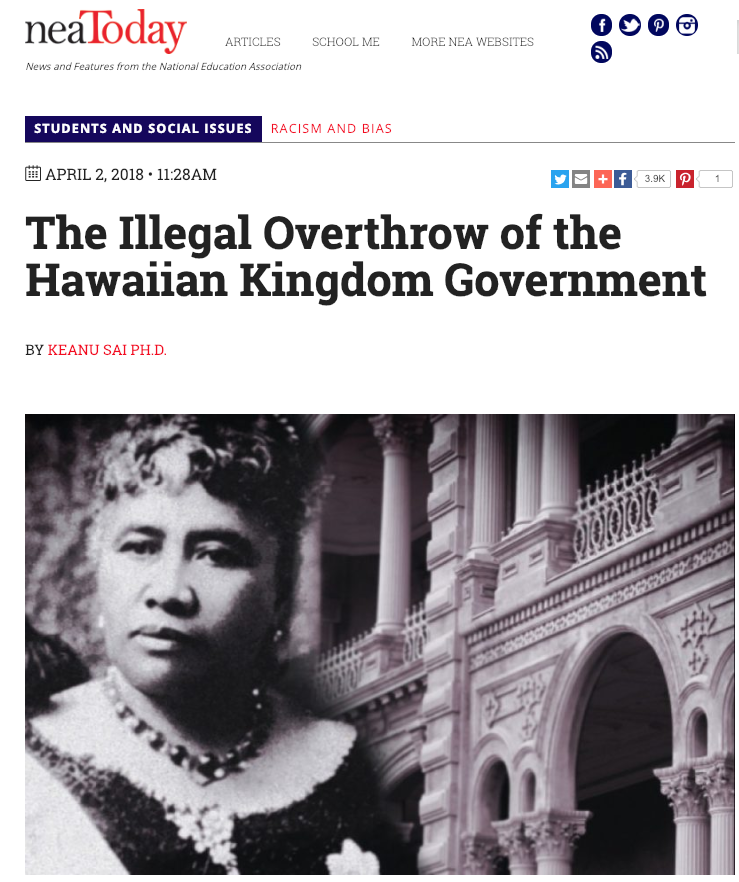 Status of the Hawaiian Kingdom under International Law

In 2001, the Permanent Court of Arbitration’s arbitral tribunal, in Larsen v. Hawaiian Kingdom, declared “in the nineteenth century the Hawaiian Kingdom existed as an independent State recognized as such by the United States of America, the United Kingdom and various other States, including by exchanges of diplomatic or consular representatives and the conclusion of treaties (paragraph 7.4).” The terms State and Country are synonymous.

By 1893, the Hawaiian Kingdom maintained over ninety Legations and Consulates throughout the world. In the United States of America, the Hawaiian Kingdom manned a diplomatic post called a legation in Washington, D.C., which served in the same function as an embassy today, and consulates in the cities of New York, San Francisco, Philadelphia, San Diego, Boston, Portland, Port Townsend and Seattle. The United States manned a legation in Honolulu, and consulates in the cities of Honolulu, Hilo, Kahului and Mahukona.

“Traditional international law was based upon a rigid distinction between the state of peace and the state of war (p. 45),” says Judge Greenwood in his article “Scope of Application of Humanitarian Law” in The Handbook of the International Law of Military Occupations (2nd ed., 2008), “Countries were either in a state of peace or a state of war; there was no intermediate state (Id.).” This is also reflected by the fact that the renowned jurist of international law, Professor Lassa Oppenheim, separated his treatise on International Law into two volumes, Vol. I—Peace, and Vol. II—War and Neutrality.

Presidential Investigation of the Overthrow of the Hawaiian Government

That I yield to the superior force of the United States of America, whose minister plenipotentiary, His Excellency John L. Stevens, has caused United States troops to be landed at Honolulu and declared that he would support the said provisional government.

Now, to avoid any collision of armed forces and perhaps the loss of life, I do, under this protest, and impelled by said force, yield my authority until such time as the Government of the United States shall, upon the facts being presented to it, undo the action of its representatives and reinstate me in the authority which I claim as the constitutional sovereign of the Hawaiian Islands.”

In response to the Queen’s conditional surrender of her authority, President Grover Cleveland initiated an investigation on March 11, 1893, with the appointment of Special Commissioner James Blount whose duty was to “investigate and fully report to the President all the facts [he] can learn respecting the condition of affairs in the Hawaiian Islands, the causes of the revolution by which the Queen’s Government was overthrown, the sentiment of the people toward existing authority, and, in general, all that can fully enlighten the President touching the subjects of [his] mission.” After arriving in the Hawaiian Islands, he began his investigation on April 1, and by July 17, the fact-finding investigation was complete with a final report. Secretary of State Walter Gresham was receiving periodic reports from Special Commissioner Blount and was preparing a final report to the President.

On October 18, 1893, Secretary of State Gresham reported to the President, the “Provisional Government was established by the action of the American minister and the presence of the troops landed from the Boston, and its continued existence is due to the belief of the Hawaiians that if they made an effort to overthrow it, they would encounter the armed forces of the United States.” He further stated that the “Government of Hawaii surrendered its authority under a threat of war, until such time only as the Government of the United States, upon the facts being presented to it, should reinstate the constitutional sovereign, and the Provisional Government was created ‘to exist until terms of union with the United States of America have been negotiated and agreed upon (p. 462).’” Gresham then concluded, “Should not the great wrong done to a feeble but independent State by an abuse of the authority of the United States be undone by restoring the legitimate government? Anything short of that will not, I respectfully submit, satisfy the demands of justice (p. 463).”

One month later, on December 18, 1893, the President proclaimed by manifesto, in a message to the United States Congress, the circumstances for committing acts of war against the Hawaiian Kingdom that transformed a state of peace to a state of war on January 16, 1893. Black’s Law Dictionary defines a war manifesto as a “formal declaration, promulgated…by the executive authority of a state or nation, proclaiming its reasons and motives for…war.” And according to Professor Oppenheim in his seminal publication, International Law, vol. 2 (1906), a “war manifesto may…follow…the actual commencement of war through a hostile act of force (p. 104).”

Addressing the unauthorized landing of United States troops in the capital city of the Hawaiian Kingdom, President Cleveland stated, “on the 16th day of January, 1893, between four and five o’clock in the afternoon, a detachment of marines from the United States steamer Boston, with two pieces of artillery, landed at Honolulu. The men, upwards of 160 in all, were supplied with double cartridge belts filled with ammunition and with haversacks and canteens, and were accompanied by a hospital corps with stretchers and medical supplies (p. 451).”

President Cleveland ascertained that this “military demonstration upon the soil of Honolulu was of itself an act of war, unless made either with the consent of the Government of Hawaii or for the bona fide purpose of protecting the imperiled lives and property of citizens of the United States. But there is no pretense of any such consent on the part of the Government of the Queen, which at that time was undisputed and was both the de facto and the de jure government. In point of fact the existing government instead of requesting the presence of an armed force protested against it (p. 451).” He then stated, “a candid and thorough examination of the facts will force the conviction that the provisional government owes its existence to an armed invasion by the United States (p. 454).”

“War begins,” says Professor Wright in his article “Changes in the Conception of War,” American Journal of International Law, vol. 18 (1924), “when any state of the world manifests its intention to make war by some overt act, which may take the form of an act of war (p. 758).” According to Professor Hall in his book International Law (4th ed., 1895), the “date of the commencement of a war can be perfectly defined by the first act of hostility (p. 391).”

The President also determined that when “our Minister recognized the provisional government the only basis upon which it rested was the fact that the Committee of Safety had in the manner above stated declared it to exist. It was neither a government de facto nor de jure (p. 453).” He unequivocally referred to members of the so-called Provisional Government as insurgents, whereby he stated, and “if the Queen could have dealt with the insurgents alone her course would have been plain and the result unmistakable. But the United States had allied itself with her enemies, had recognized them as the true Government of Hawaii, and had put her and her adherents in the position of opposition against lawful authority. She knew that she could not withstand the power of the United States, but she believed that she might safely trust to its justice.” He then concluded that by “an act of war, committed with the participation of a diplomatic representative of the United States and without authority of Congress, the Government of a feeble but friendly and confiding people has been overthrown (p. 453).”

“Act of hostility unless it be done in the urgency of self-preservation or by way of reprisals,” according to Hall, “is in itself a full declaration of intent [to wage war] (p. 391).” According to Professor Wright in his article “When does War Exist,” American Journal of International Law, vol. 26(2) (1932), “the moment legal war begins…statutes of limitation cease to operate (p. 363).” He also states that war “in the legal sense means a period of time during which the extraordinary laws of war and neutrality have superseded the normal law of peace in the relations of states (Id.).”

Unbeknownst to the President at the time he delivered his message to the Congress, a settlement, through executive mediation, was reached between the Queen and United States Minister Albert Willis in Honolulu. The agreement of restoration, however, was never implemented. Nevertheless, President Cleveland’s manifesto was a political determination under international law of the existence of a state of war, of which there is no treaty of peace. More importantly, the President’s manifesto is paramount and serves as actual notice to all States of the conduct and course of action of the United States. These actions led to the unlawful overthrow of the government of an independent and sovereign State. When the United States commits acts of hostilities, the President, says Associate Justice Sutherland in his book Constitutional Power and World Affairs (1919), “possesses sole authority, and is charged with sole responsibility, and Congress is excluded from any direct interference (p. 75).”

According to Representative Marshall, before later became Chief Justice of the U.S. Supreme Court, in his speech in the House of Representatives in 1800, the “president is the sole organ of the nation in its external relations, and its sole representative with foreign nations. Of consequence, the demand of a foreign nation can only be made of him (Annals of Congress, vol. 10, p. 613).” Professor Wright in his book The Control of American Foreign Relations (1922), goes further and explains that foreign States “have accepted the President’s interpretation of the responsibilities [under international law] as the voice of the nation and the United States has acquiesced (p. 25).”

Despite the unprecedented prolonged nature of the illegal occupation of the Hawaiian Kingdom by the United States, the Hawaiian State, as a subject of international law, is afforded all the protection that international law provides. “Belligerent occupation,” concludes Judge Crawford in his book The Creation of States in International Law (2nd ed., 2006), “does not affect the continuity of the State, even where there exists no government claiming to represent the occupied State (p. 34).” Without a treaty of peace, the laws of war and neutrality would continue to apply.