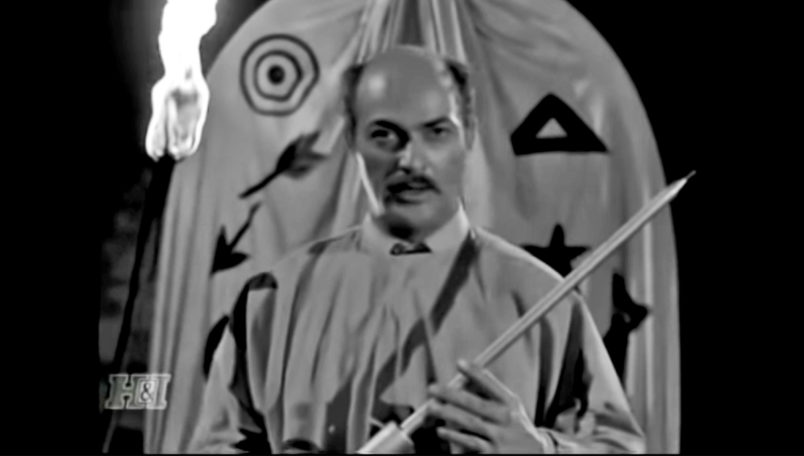 10 Jan 2019 – The writer and animator Alex Hirsch yesterday flagged a quirk of television history with an odd connection to present-day politics: In 1958, CBS aired an episode of the series “Trackdown” called “The End of the World,” in which a confidence man named Trump attempts to sell a western town a “wall” — in the form of supposedly mystical parasols — to protect them from the fake threat of a meteor shower.

What the fresh hell. This is REAL. Filmed in 1958- about a conman who grifts a small town of suckers into building a wall. History not subtle enough for you? GUESS THE GRIFTER’S NAME
(And watch until the end) pic.twitter.com/6FA3p6KC00

Snopes did the fact-checking legwork: In the episode, “Dr. Walter Trump, DU MC SSR” — or “Doctor of the Universe, Master of Cometry, Student of Stellar Reactions” — whips a western town into a frenzy by tricking its residents into believing they’ll be wiped out by a meteor shower before the day is done.

As protection, he sells parasols with drawn-on mystical symbols, calling them a “wall” that can magically repel danger.

Eventually — despite Trump’s threat of a lawsuit — the show’s protagonist, Texas Ranger Hoby Gilman, reveals that Trump is a fraud who’s in cahoots with the town’s sheriff, and midnight passes without any meteor-related deaths. Trump ends up dead, shot by the sheriff in an attempt to cover up the scheme.

The episode is full of relevant dialogue: “I bet it fits,” Gilman says at one point of the name “Trump.” Elsewhere, a judge warns the ranger: “I live here, I know these people pretty well, and right now there’s nothing in the world that can change their minds [about Trump] — and anybody who tries to could end up getting hurt. They’re not going to listen.”

“Well, what if he starts a panic?” Gilman responds. “It could happen.”

“Well sure, but you might as well try to spit out a forest fire,” the judge says, adding: “It’s funny how a big lie can make us all kids again.”

Later, after the narrator refers to Trump as “the high priest of fraud,” the conman delivers some hauntingly prescient dialogue in a speech to the town.

“I am the only one! Just me! I can build a wall around your homes that nothing will penetrate,” Trump says.

“What do we do?” a someone asks. “How do we save ourselves?”

“You ask: How do you build that wall?” Trump responds. “You ask, and I’m here to tell you.”

Snopes dug up a full version of the episode on YouTube. Watch it below: