Afghanistan in Photos: When a US Strike Hits a Family Home 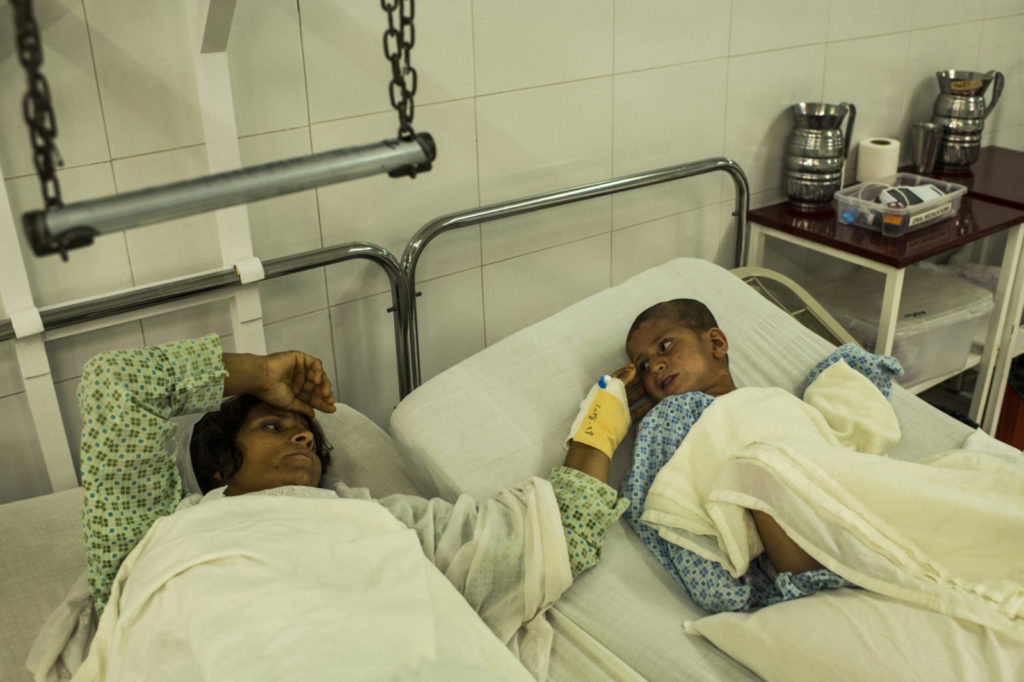 2 Jan 2019 – The doors of Emergency Hospital in Lashkar Gah, the capital of Afghanistan’s Helmand Province, swung open: Ehsanullah, 14, his face a swollen mess of flesh, was the first to be wheeled in.

His younger brother Hedayat, 4, was next. He had deep wounds up and down both legs, a skull injury and a bubble of intestine was protruding from a small hole in his abdomen. Then came Noor Ahmad, 7, and Parwana, 9, whose face was spider-webbed with blood from a wound on the crown of her head. All arrived totally silent, muted by the shock. And still more kept coming.

Within a few minutes, 13 members of the same extended family had been admitted to the hospital – ten children, an elderly man, and two women, one of whom was pregnant.

They had been struck by munitions from an American aircraft as they sheltered in their house on November 24. Alongside the 13 injured, two members of the family had died at the scene – 15-year-old Esmatullah and his father Obaidullah. 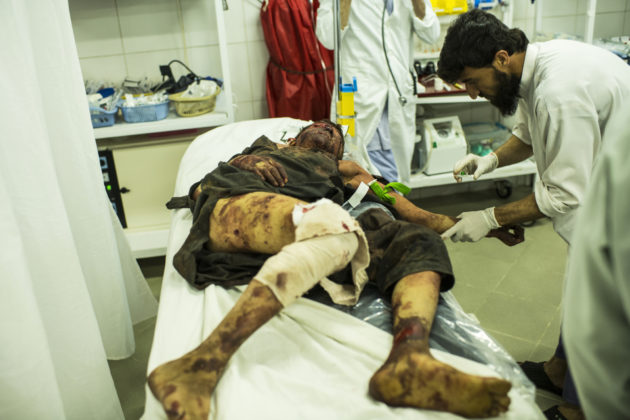 Ehsanullah (14) arrived at the Out Patient Department missing one eye, while the other was ruptured and would later need to be removed. He had numerous other shell injuries from head to toe. Andrew Quilty 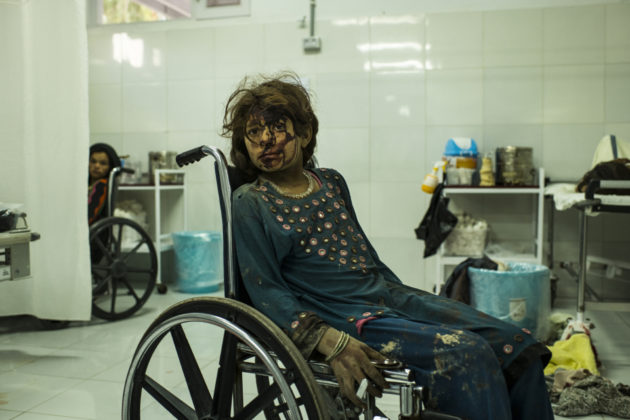 Parwana (9) who had a head and leg wound, and Malali (age unknown, background) wait to be treated in the Emergency Hospital Out Patient Department. Andrew Quilty 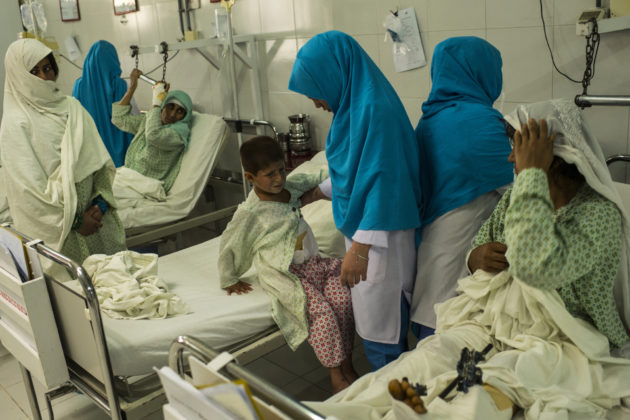 A nurse helps an extremely reluctant and in-pain Noor Ahmad (7) back into bed after an attempt to walk for the first time since suffering his injuries, in the female and children’s ward. Andrew Quilty

Just days later, US ordnance struck another building, with even greater civilian casualties – 23 people were killed, many of them children, in Helmand’s Garmsir District.

It raises questions about what the US is trying to achieve in Afghanistan especially since President Trump’s announcement that he is going to pull back half the American troops who are in country and Defense Secretary Jim Mattis’s resignation in protest against that policy change and the withdrawal of US forces from Syria.

Civilian casualties resulting from US military operations had declined significantly after measures were taken to stop them in 2009. This trend began to change after US airstrikes picked up pace again in 2015, and the last year has seen a particularly acute reversal of it.

New data shows that many of the most recent strikes appear to be hitting buildings, despite US rules placing significant restrictions on such strikes because of the risks to civilians.

The Bureau recently reported on how more than 60 buildings were destroyed by US airstrikes in Afghanistan in October (only the second month that target information had been released). This analysis came after a report that month from the UN mission in Afghanistan found the number of US strikes leading to civilian casualties had doubled.

The US military told the Bureau that the problem was that the Taliban were using civilians as human shields, and that it was often “difficult to discern” when non-combatants are inside buildings that fighters are firing from. It says the rules on targeting buildings have not been relaxed.

Seeing what these policies look like on the ground is hard to do – many attacks happen in highly contested areas. But the Bureau has been able to gather detailed evidence of an attack on a building, and its consequences for one family. 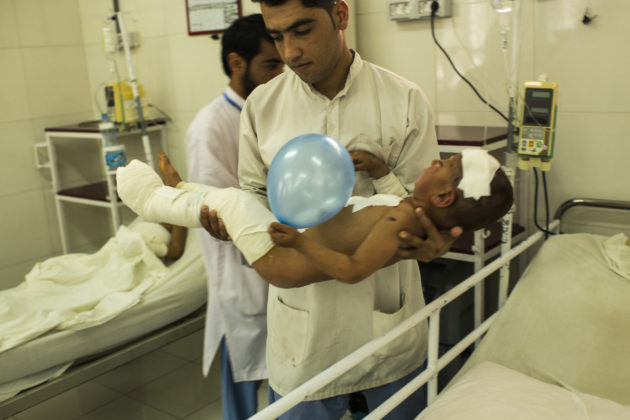 Hedayat, 4, is placed in a wheelchair before being wheeled to his mother in the female ward after he cried for her throughout the morning in the hospital’s sub-Intensive Care Unit. Andrew Quilty 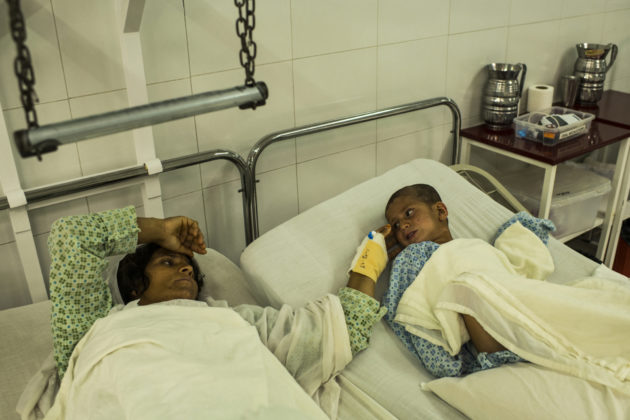 Qarara and her son Hedayat recover in the female and children’s ward at Emergency Hospital. Andrew Quilty 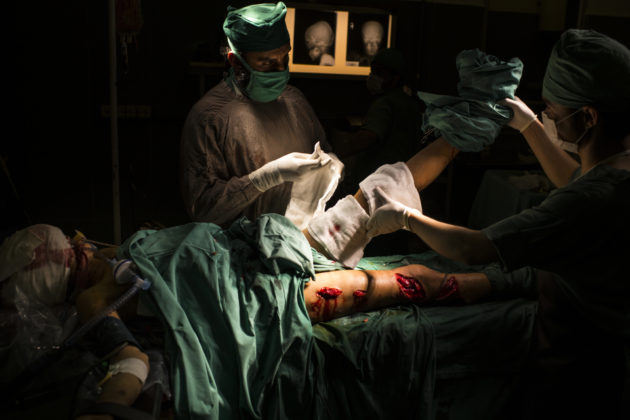 Surgeons clean dead and damaged tissue from Ehsanullah’s wounds. They explained this was necessary on all traumatic war wounds in Afghanistan because of the highly contaminated environment and the likelihood of resulting infection. Andrew Quilty 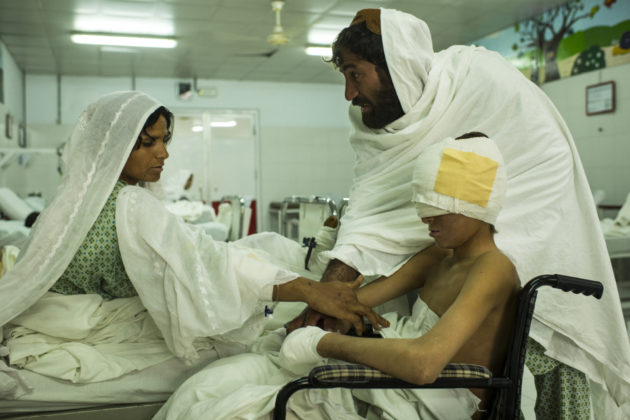 Ehsanullah’s mother Qarara (50) and uncle Sardar Wali (30) inside Emergency hospital. Sardar Wali couldn’t tell Qarara that her son’s eyes had ruptured and that he would never see again. Andrew Quilty

The village of Loy Manda lies less than ten miles outside of Lashkar Gah, the capital of Afghanistan’s restive Helmand province.

As Afghan government forces—with the help of the Americans—retook territory the Taliban had controlled since 2016, Loy Manda became the frontline. Afghan troops took up positions on the edge of the village in the lead-up to operations aimed at retaking it from the Taliban.

An Afghan army commander called Toryalai was stationed at a frontline checkpoint along the main road outside the village that day. He told the Bureau that he didn’t know a 20 vehicle strong convoy of Afghan and US Special Operations forces were travelling through the area until he heard the sound of it coming under fire.

On hearing the sound, the Ishaqzai family hurried inside their home and closed the doors. Soon after, two Taliban fighters ran into their yard from the street. Ehsanullah’s mother Qarara said that her husband, Obaidullah, begged them to leave. They did, she says, but only after taking some shots at the the passing convoy.

In another part of the village, Obaidullah’s nephew Saifullah was working at his pharmacy. He heard the distinctive second-long bursts from the Gatling Gun of an A-10, a fixed-wing aircraft used for close air-support by the US military in Afghanistan. Looking out, he could see dust and smoke rising above the trees from the direction of the house his family shared with his uncle Obaidullah’s family. He hurried over.

By the time Saifullah arrived at the family compound, two bodies were lying on the ground, their faces covered in scarves. It was Obaidullah and his 15-year-old cousin, Esmatullah. Their clothes were torn and bloody.

More than a dozen others, mostly children, screamed as the American soldiers bandaged the worst of their wounds. More than two hours passed before they arrived at Emergency.

In the days following the strike, the survivors rested in bed between surgeries and occasionally, outside in the hospital’s rose gardens.

Qarara, with a thatch of steel pins holding her shattered left leg together, had so many crying children throughout the hospital that they had to be brought to her in shifts, in wheelchairs, to be calmed.

When her eldest, Ehsanullah, was brought to her by his uncle Sardar Wali, the top half of his head was wrapped in thick bandages. One of his eyes had been torn out in the attack. The other had ruptured and would need to be surgically removed.

Sardar Wali couldn’t bring himself to tell Qarara that her son would never see again. 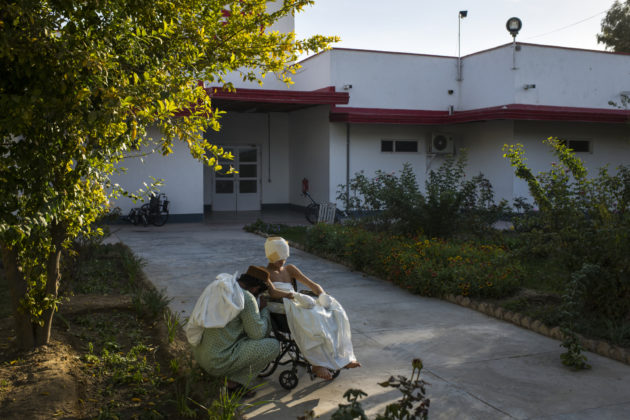 Ehsanullah lost one eye while the other was ruptured and had to be removed. He also had several leg and abdominal injuries. His uncle, Sardar Wali, sits and weeps beside him in the garden at Emergency hospital. Andrew Quilty 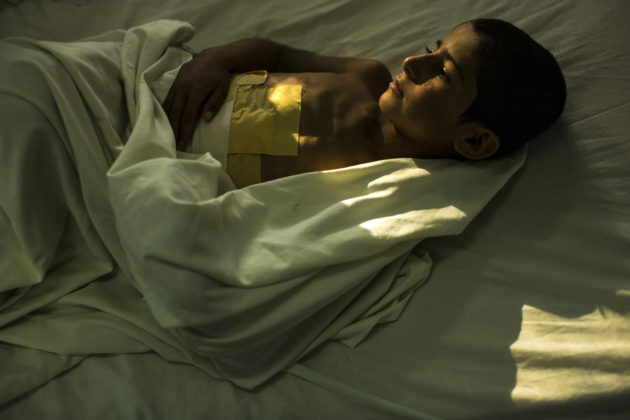 Rahmatullah (8) recovers in a ward at the hospital. Andrew Quilty 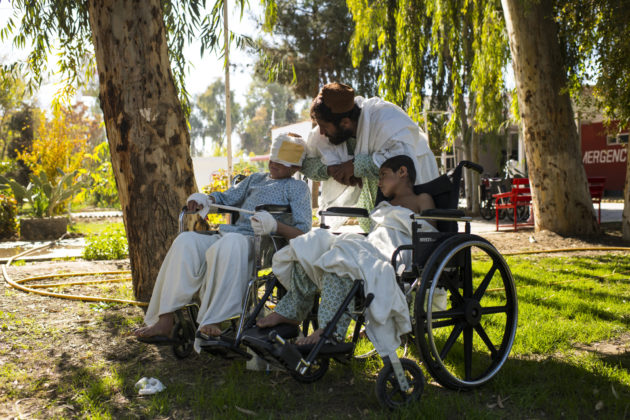 Ehsanullah and Rahmatullah spend time in the hospital’s garden with their uncle. Andrew Quilty 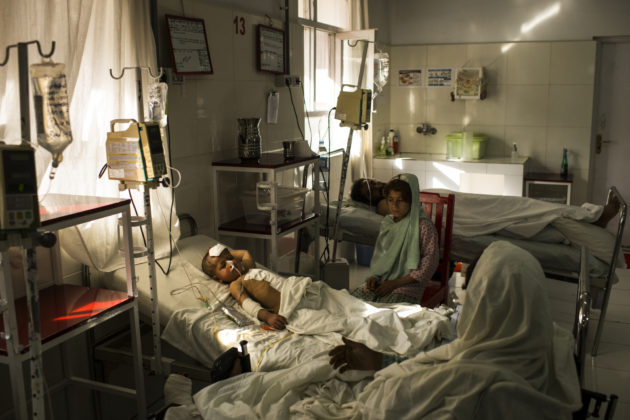 Hedayat with his sister Parwana and mother Qarara (foreground), in the sub-Intensive Care Unit. Qarara was often required at her childrens’ side to calm them. Andrew Quilty

The remaining members of Obaidullah’s family are still incredulous. Saifullah doesn’t understand how the Americans could not have realised they were hitting a family home, pointing to the fact that brightly coloured women’s clothes had been hung to dry on a line in the yard.

“We know US forces, accompanying their Afghan security partners, called in self-defence air support against a building from which the Taliban were shooting,” a US military spokesperson told the Bureau. “Too often the Taliban use civilians as hostages and human shields.”

Sardar Wali, Ehsanullah’s uncle, is angry at both sides. He told the Bureau that blame for the incident “belongs to both the Americans and the Taliban.”

After the Americans left the scene of the attack, friends and relatives of Obaidullah’s family, and several Taliban fighters, gathered at the house to clean up and assist with the dead.

A village elder, Haji Zahir, drew the scarves away from the two bodies still lying outside, asking them with bitter irony: “Did you fire on the Americans?”

Then he turned to the insurgents. “Look what you brought to us,” he said angrily. “This is your jihad?”

The Taliban, rifles slung over their shoulders, stood in silence. 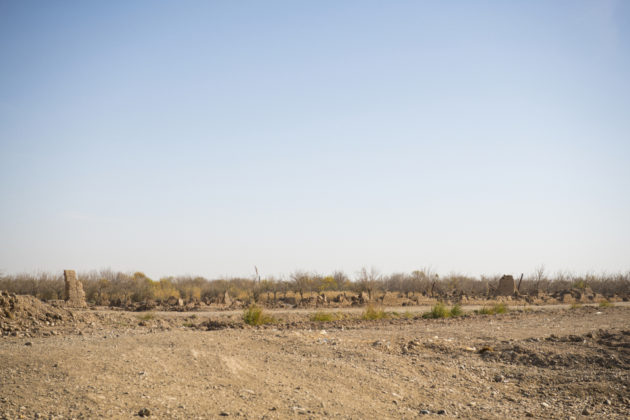 The view from the Afghan National Army checkpoint, on the front-line between government and Taliban forces in eastern Loy Manda in Nad-i Ali District, Helmand Province, toward a house that was struck in an airstrike one week prior, on November 24, 2018. Andrew Quilty

The Bureau of Investigative Journalism is an independent not-for-profit organisation that holds power to account. We find the facts to expose wrongs and spark change. We tell the stories that matter. Established in April 2010, the Bureau is the first of its kind in the UK, where philanthropically funded journalism is rare. Our team of journalists bolsters original news by producing high-quality investigations for press and broadcast media with the aim of educating the public and the media on both the realities of today’s world and the value of honest reporting.