9 Jan 2019 – Major fighting in Myanmar’s troubled Rakhine state has so far been avoided following clashes between armed separatists and national security forces that are increasing troop numbers there, a top UN humanitarian official there said today.

In an interview with UN News, Knut Ostby, Acting Resident and Humanitarian Coordinator for Myanmar, reiterated calls for all sides “to find a peaceful solution to the situation”, amid concern “that there could be a quite immediate escalation of fighting”.

It is also vital that humanitarian access is improved to help all those affected by the violence, Mr Ostby said.

“We are worried that if there is new major displacement and new need for major humanitarian assistance that access… will not be sufficient to deliver the assistance needed.”
— Knut Ostby, UN in Myanmar

Some 4,500 people have been displaced in the fighting in recent weeks, Mr Ostby noted, adding that the Myanmar authorities have announced that they intend to “crush” the so-called Arakan Army insurgents.

A young child sleeps in a shelter at the Kyein Ni Pyin camp in Rakhine province, Myanmar. Over 700,000 members of the Rohingya community have been forced from their homes as a result of widespread and systematic violence. UNICEF/Ruslana Sirman

“I think the situation as far as we know, has not broken out to major fighting, but there have been more troop build-ups”, Mr Ostby said, before speaking of his shock at attacks on police outposts last Friday that claimed 13 officers’ lives.

Noting that humanitarian access to communities in need of help in Rakhine state “has not improved since 2017” –  when some 700,000 Rohingya Muslims fled violence there to neighbouring Bangladesh – the UN official warned that facilities were not in place to cope with yet more mass movement of people. 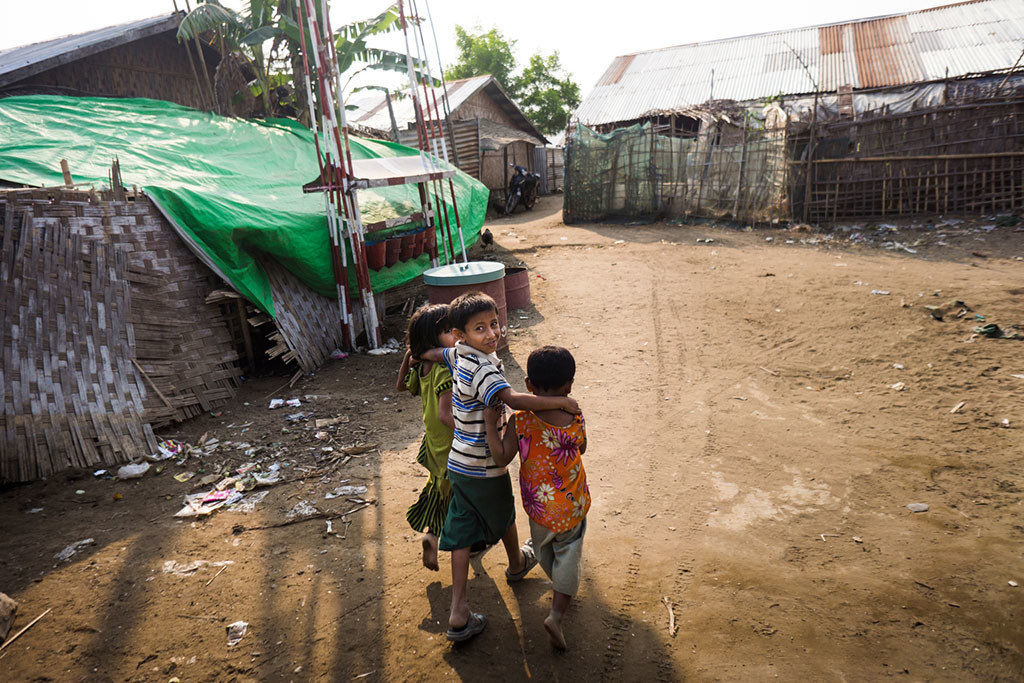 In this file photograph, children walk shelters at a camp for displaced persons in Rakhine state, Myanmar. Most of the displaced are women and children.
UNICEF/Brown

“We are worried that if there is new major displacement and new need for major humanitarian assistance that the access we are having will not be sufficient to deliver the assistance needed”, Mr. Ostby said, noting that the violence risked affecting “all ethnic groups”.

The latest violence comes amid a wider pattern of sporadic but at times intense fighting between ethnic groups and the authorities in Myanmar dating back more than 70 years in some cases, since independence in January 1948.

Although a ceasefire is in place in northern and eastern areas of Myanmar, the UN official explained that “it does not include Rakhine state, and that is why we are worried that there will be new escalation that would lead to new suffering of the civilian population”.

The United Nations will continue to maintain contact with local authorities in Rakhine state as well as central Government to “try to do more on the humanitarian and development side” in Myanmar, Mr Ostby insisted, noting that “there is a lot more that could be done and should be done, if we had more access”.