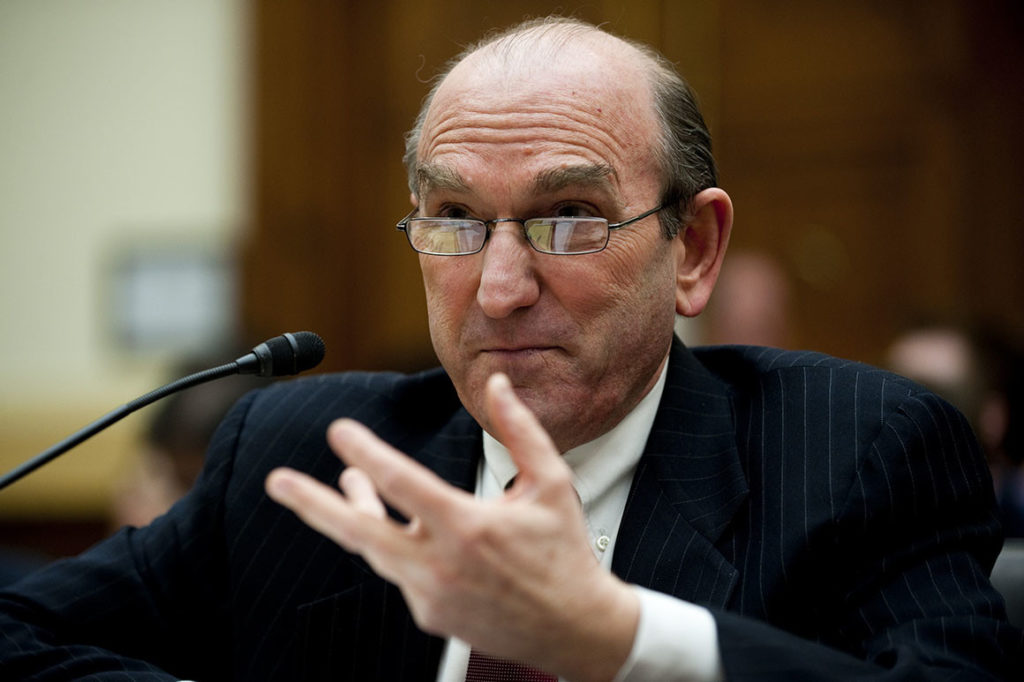 25 Jan 2019 – Elliott Abrams, a controversial neoconservative figure who was entangled in the Iran-Contra affair, has been named as a Trump administration special envoy overseeing policy toward Venezuela, which has been rocked by a leadership crisis.

Abrams’ appointment, announced Friday by Secretary of State Mike Pompeo, is something of a surprise — President Donald Trump nixed his 2017 bid to be deputy secretary of State after learning that Abrams had criticized him.

Abrams will now be one of several special envoys Pompeo has brought on board to tackle thorny issues. He takes on his role at an unusually volatile time in U.S.-Venezuelan relations.

Earlier this week, Trump announced he no longer recognized the legitimacy of the Venezuelan regime of Nicolás Maduro and said the U.S. now considers opposition leader Juan Guaidó to be the country’s “interim president.” But Maduro refuses to leave power and has declared that Venezuela will cut off diplomatic ties with the United States.

“This crisis in Venezuela is deep and difficult and dangerous, and I can’t wait to get to work on it,” Abrams said in brief remarks to reporters.

Abrams, who served in the Reagan and George W. Bush administrations, is a well-known and somewhat controversial figure in U.S. foreign policy circles.

He has often expressed hawkish views and is fiercely pro-Israel, but he also has written and spoken eloquently about the need to support human rights around the world.

Abrams was deputy national security adviser in the George W. Bush administration and was instrumental in Middle East policy at the time, including supporting the U.S. invasion of Iraq.

There were also allegations that he supported a military coup attempt in Venezuela in 2002, damaging the U.S. relationship with the government there after the plot ultimately failed.

He was one of the Reagan administration’s fiercest advocates of armed support for Nicaraguan rebels and thus becae caught up in the Iran-Contra scandal.

In 1991, he pleaded guilty to two misdemeanor counts of withholding information from Congress about secret efforts to aid the rebels. President George H.W. Bush pardoned him the next year.

Abrams is one of very few people who were critical of Trump during the 2016 campaign and yet have been allowed to join the Republican administration. Another, James Jeffrey, is a special envoy dealing with Syria policy.

Pompeo on Friday spoke warmly of Abrams, saying he “will be a true asset to our mission to help the Venezuelan people fully restore democracy and prosperity to their country.”

Abrams, who in recent years has been at the Council on Foreign Relations think tank, noted the timing of his return to the State Department. “I left this building 30 years ago this week, last time I worked here. So it’s very nice to be back,” he said.