Resettlement gave Bertine Bahige a new chance in life. The former Congolese refugee would have never imagined he would one day call Wyoming home.

Growing up in Bukavu, in the Democratic Republic of the Congo (DRC), Bertine Bahige was studying hard to become a doctor. At 13, he had his life figured out. Or so he thought.

19 Dec 2018 –Everything changed the day the Mai Mai rebel group stormed into his town in eastern DRC, going door to door to abduct new recruits.

“It was the hardest thing,” Bertine recalls with a broken voice. “Looking in your parents’ eyes and knowing that you’re about to be completely separated from everything you have ever known in your whole life.”

Bertine spent two years in captivity. He was horrified by how children were terrorizing each other. “You had to be ruthless to advance in the ranks,” Bertine recalls. “That is not who I am.” He could not stand the violence and decided to escape. “I knew this could be it, but I had to take my chance,” he says.

“I had been given a chance to live a new life and I wanted to get the best out of it.”

His flight took him thousands of kilometres away, crossing lake Tanganyika on a fisherman’s boat who kindly allowed him to board for free and hiding in the back of a truck full of dry salted fish. For three days, that was all Bertine ate. “It was my first gourmet meal in a long time,” Bertine says with his unbeatable optimism.

Bertine Bahige, 38, at Rawhide Elementary School in Gillette, Wyoming where he serves as the principal.
© UNHCR/Cynthia Hunter

Exhausted and about to faint, Bertine collapsed by a tree. When he woke up, around him were people speaking a language he could not understand. He did not even know in what country he was. It turned out to be Mozambique. Bertine spent five years in Maputo refugee camp, managed by the UN Refugee Agency.

The young Congolese refugee was especially worried about continuing his education – there was no secondary school in the camp. After some interviews, Bertine was told he was going to be “referred for resettlement,” but he did not know what that meant.

Less than 1% of refugees were resettled to third countries in 2017. Thirty-five countries world-wide take part in UNHCR’s resettlement programme. In recent years, the United States has been the world’s top resettlement country, followed by Canada, Australia and the Nordic countries. 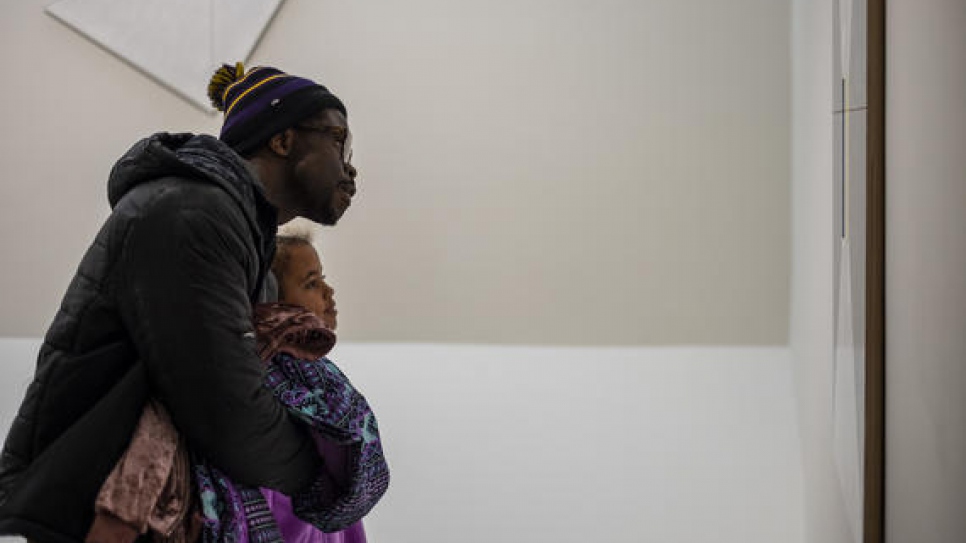 Former Congolese refugee Bertine Bahige, 38, and his daughter Giselle, 8, at the Guggenheim museum during a visit to New York. © UNHCR/Marta Martinez

In 2004, Bertine landed in Baltimore, Maryland in the United States. As soon as he stepped off the plane, he looked for the skyscrapers he had always envisioned but he could not find them. A warm feeling grew inside him: “Now I am safe.”

Bertine’s first job was at Burger King, where he started taking out the garbage and progressively moved up the ladder to become a cashier. “I always challenged myself to the next thing,” Bertine says. “I had been given a chance to live a new life, to educate myself, and I wanted to get the best out of it.”

Juggling three jobs at a time, Bertine joined community college and would never miss a class. Since he did not have a car, he would ride nearly 10 kilometres on his bike to make it to evening classes.

Bertine did so well in school that he was offered a scholarship to study at University of Wyoming. He knew very little about the rural state and when he would tell his friends about it, everyone misunderstood where he was headed. “Are you going to Miami?” They would ask.

“All refugees are asking for is an opportunity.”

But soon Wyoming became home for Bertine. At university he met his wife, and after graduating in mathematics and math education he became a high school teacher in Gillette. He now has two children and is the principal of Rawhide Elementary School.

“This country took a chance on someone who had nothing, and it has blessed me to be who I am,” Bertine says. “I look at it as my civic duty, my responsibility, to give back that way.”

In a recent visit to New York, Bertine wore a black hat with yellow and purple stripes and two big Cs sewn on the front. It is the logo of the high school where he taught math for 10 years and where he still coaches after-school soccer. “I needed to bring something from home,” he says.

Bertine was in New York to share his story at the United Nations headquarters in support of a new global agreement – known as the Global Compact on Refugees – aiming to strengthen support for refugees and the countries that host them. Among the solutions the new deal promotes there are more resettlement opportunities, like the one Bertine had.

Because of what he went through as a child, Bertine deeply enjoys working with at-risk kids and is able to connect with them at a deeper level than a regular teacher.

“We fail to look at it from the other side – ‘How can refugees enrich our community?’”

“I understand where they come from, what it’s like not to have food, to think that it’s you against the whole world, to not understand English,” he says. “But I also understand that that’s an opportunity for me to show them that I got them, that we are going to work together step by step, that they can actually be successful.”

His former students often come back, even years later, asking him for advice or to help them with something they are struggling with. On social media, they are his biggest supporters and always share glowing comments about him.

At the Guggenheim museum, Bertine discusses an abstract painting with his eight-year-old daughter Giselle. The little girl sees a pink and yellow butterfly with its wings wide open, while Bertine thinks it looks more like an oyster. The former refugee rejoices at how art sparks imagination. “We can be looking at the same thing and see something completely different,” he adds.

Painting after painting, he embarks on conversations with his daughter to learn her point of view and answer her questions. Even as a tourist, Bertine cannot help being the teacher he is deep inside.