UNESCO Should Cry No Tears over Israel’s Departure 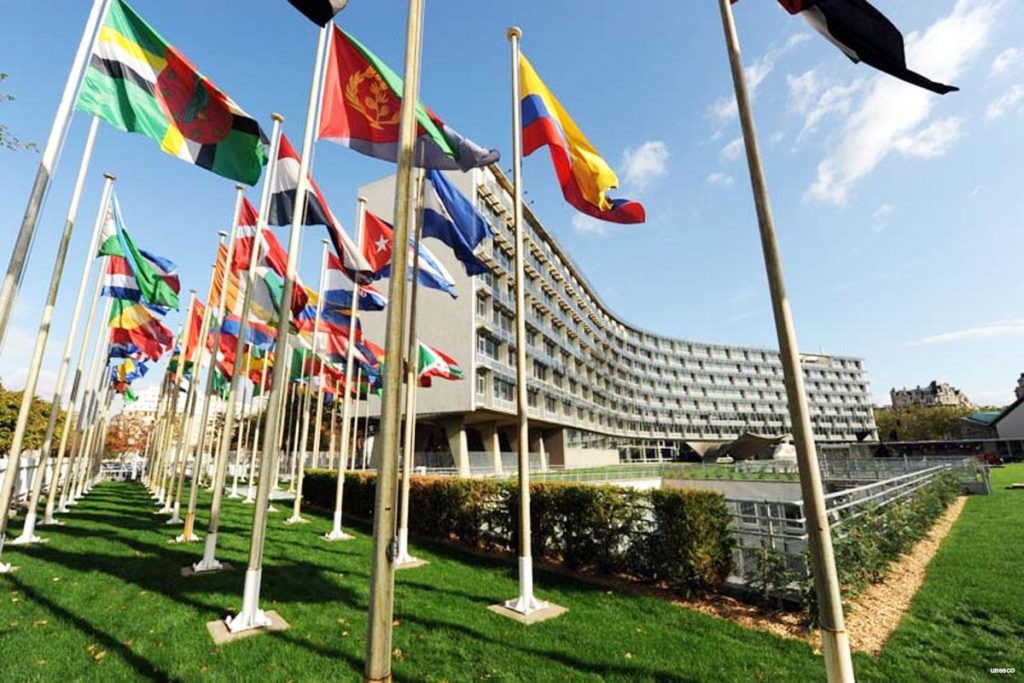 2 Jan 2018 – There will be no tears now Israel and the USA have withdrawn from the United Nations Educational, Scientific and Cultural Organisation (UNESCO). Both countries have undermined the organisation’s credibility and brought it into disrepute – UNESCO will be better off without them.

UNESCO is governed by several international accords, to which all members are treaty-bound to adhere. The 1954 “Hague Convention for the Protection of Cultural Property in the Event of Armed Conflict” is arguably the most important international instrument for the protection of cultural property – defined as monuments of architecture, art or history; archaeological sites; buildings of historical or artistic interest; works of art; manuscripts, important books and archives, as well as scientific collections.

Both The Hague Convention and its Protocol have been incorporated into international customary law; their provisions are, therefore, binding on all parties to conflict, regardless of whether or not they are signatories to these instruments. In recent years, the protection of cultural heritage has been deemed so important that the Statute of the International Criminal Court (ICC) has recognised the destruction and seizure of buildings dedicated to religion, education, arts, science or charitable purposes, as well as historic monuments, a war crime.

Yet throughout its 70-year history, Israel has shown an alarming disregard for UNESCO’s rules and ideals, seeking exemptions and privileges not granted to any other member state. Its real grievance with UNESCO is that it wants the organisation to remain silent and, in doing so, endorse its theft and destruction of Palestinian cultural heritage.

Israeli soldiers and civilians have stolen innumerable objects of historical, cultural and archaeological importance to Palestine. Bizarrely, on the same day that Israel announced its withdrawal from UNESCO, one of the country’s leading daily newspapers, Haaretz, published an article under the title “Israel Displays Archaeological Finds Looted from West Bank”. This was in reference to a Civil Administration exhibition currently being held at the Bible Land Museum in Jerusalem.

As a contracting party to The Hague Convention, Israel is obliged “to prohibit, prevent and, if necessary, put a stop to any form of theft, pillage or misappropriation of, and any acts of vandalism directed against, cultural property”. Yet, with the backing of the US, it chooses to do just the opposite.

Furthermore, as a matter of policy Israel refuses to share with Palestinian researchers the data and objects obtained from its excavations in the occupied territories. Although Israel signed the UNESCO “Recommendation on International Principles Applicable to Archaeological Excavations” in 1956, it has refused to ratify the 1970 “UNESCO Convention on the Means of Prohibiting and Preventing the Illicit Import, Export and Transfer of Ownership of Cultural Property”. Instead, it continues to argue that international law does not prohibit excavation in occupied territories.

Around 53 per cent of the archaeological sites in the occupied West Bank are located in Area C, in which Palestinians are prohibited from conducting exploration, restoration and development. Unsurprisingly, during the first five years of the Oslo Accords (1993-98), only nine out of the 171 excavation permits issued by the Israeli Staff of Antiquities were granted to Palestinian academic institutions.

All told Israel has, for its own partisan reasons, never been a committed member of UNESCO. Its discomfort always lay in the fact that it could not persuade the organisation’s members to acquiesce to its theft and destruction of Palestinian cultural heritage. Disagreement and divorce seemed inevitable, given that UNESCO has declared some of the sites affected by Israel’s occupation as World Heritage sites.

Contrary to the Israeli-US claim, UNESCO has never adopted a policy of singling-out Israel for criticism or censure – the only reason it has been subjected to scrutiny is because it has, for decades, refused to act in accordance with UNESCO’s rules.

Were UNESCO to turn a blind eye to Israel’s looting and vandalising of Palestinian cultural heritage, this would be nothing less than a dereliction of duty. Furthermore, to appease Israel would set a dangerous precedent for rogue states and non-state actors to act with similar impunity.  Instead of weeping over their departure, UNESCO must now feel deeply relieved that it will no longer be called upon to act against its principles, values and interests.