US Regime Change in Venezuela: The Documented Evidence 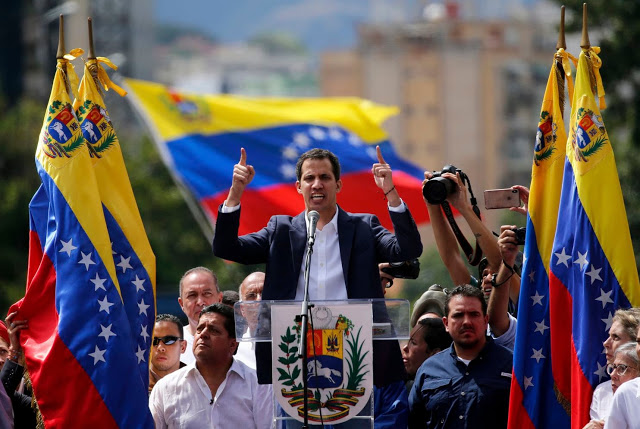 In response, President Maduro has demanded US diplomatic personnel to leave the country.

Protests and counter-protests have reportedly taken to the streets as both sides attempt to seize the psychological and political initiative.

According to US Secretary of State Mike Pompeo – the impetus for Washington’s sudden interest in Venezuela is the suffering of the Venezuelan people.

Reuters in their article titled, “Pompeo calls on Venezuela’s Maduro to step down, urges support from military,” would claim:

In a statement, Pompeo said Washington would support opposition leader Juan Guaido as he establishes a transitional government and prepares the country for elections.

In truth, Washington’s motivation is the fact that according to The Organization of the Petroleum Exporting Countries (OPEC) – Venezuela has the largest proven oil reserves on Earth – more than Saudi Arabia and accounting for nearly a quarter of all OPEC production. 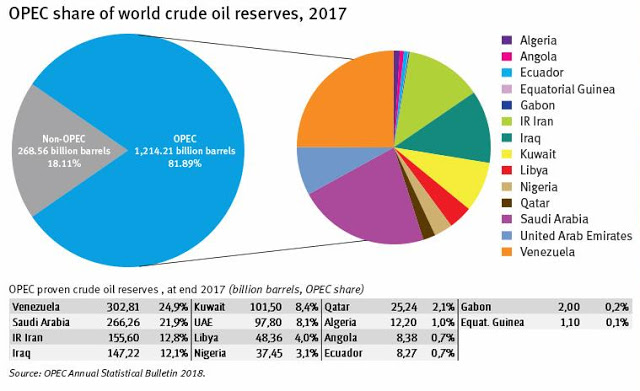 A Venezuela governed by a stable political order able to produce wealth from its massive oil reserves – and dedicated to a multipolar alternative to Washington’s current international order is intolerable for Wall Street and Washington and explains the vast amount of time, energy, money, and resources the US has invested in destabilizing and overthrowing first President Hugo Chavez – with a coup attempt in 2002 – and now President Maduro.

US Meddling in Venezuela

Even the Western media has admitted that the US has long meddled in Venezuela’s internal affairs by funding the opposition. 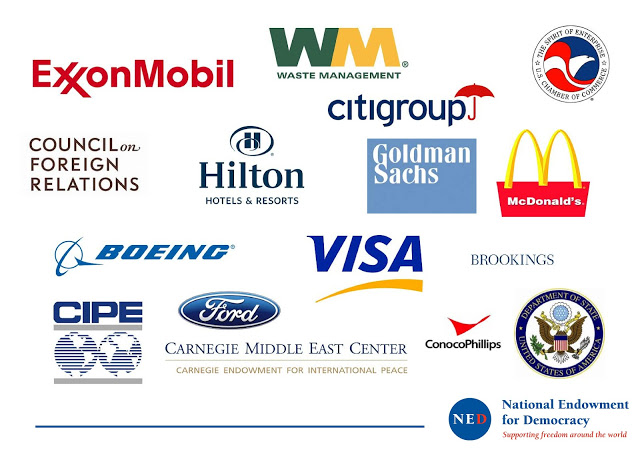 The UK Independent in a recent article titled, “Venezuela military chief declares loyalty to Maduro and warns US not to intervene,” would admit (emphasis added):

Some of the effort has been in distributing funds to opposition groups through organisations such as the National Endowment for Democracy, while some has been in the form of simple propaganda.

Mark Weisbrot, co-director of the Centre for Economic and Policy Research in Washington, said that for the past 20 years it had been US policy to seek a change of government in Caracas. Mr Trump’s recognition of Mr Guaido was the most obvious effort to undermine the government.

The US National Endowment for Democracy’s (NED) own current webpage admits to extensively interfering in every imaginable aspect of Venezuela’s internal political affairs with funds directed at:

It is clear that the US is funding virtually every aspect of opposition operations – from media and legal affairs, to indoctrination and political planning, to interference in the economy and the leveraging of “human rights” to shield US-funded agitators from any attempt to arrest them.

At one point during US regime change efforts, NED-funded front, Sumate, would even organize a recall referendum against President Chavez – which he won. The Washington Post in a 2006 article titled, “Chavez Government Probes U.S. Funding,” would admit:

[Sumate] organized a recall referendum in 2004 that Chavez won and also is a vociferous critic of the government and the electoral system.

The article also admits that:

USAID which hired the Maryland-based company Development Alternatives Inc. to administer the grants has declined to identify many Venezuelan recipients, saying they could be intimidated or prosecuted.

While the nature of the US government’s extensive meddling in Venezuela remains intentionally covert – admissions surrounding Sumate’s activities illustrate how even entire referendums are organized through the use of US money and guided by US directives.

US support is not confined to broad efforts to build up the opposition – but also specific efforts to aid senior opposition leaders.

A leaked 2004 US State Department document titled, “Status of Capriles and Sumate Cases,” made it clear that NED funding was ongoing even then, and that the US State Department was required to provide aid to NED-funded front Sumate being prosecuted for the very obvious treason they were engaged in. It also illustrated US State Department support for senior opposition leader Henrique Capriles Radonski.

Capriles – along with Leopoldo Lopez – served as mentors to current opposition leader Juan Guaido who is now openly being offered some $20 million by the US State Department in aid.

US Efforts to Cripple Venezuela’s Economy

[Pompeo] pledged $20 million towards humanitarian aid for Venezuela, where economic collapse, hyperinflation, and food and medicine shortages have sparked an exodus of millions of people.

The paradoxical nature of this supposed aid is that the United States had deliberately caused this economic collapse, hyperinflation, and food and medicine shortages in the first place – specifically to undermine and destabilize first President Chavez’ government and now Maduro’s.

The US Treasury Department aimed sanctions specifically at (PDF) Venezuela’s central bank and Petroleos de Venezuela, S.A. (PdVSA) – Venezuela’s state-owned oil and gas company to restrict financing and to block transfers – while the US and allied OPEC members acted in concert to lower global oil prices – not only to cripple Venezuela’s oil-based economy – but those of other US adversaries including Iran and Russia. 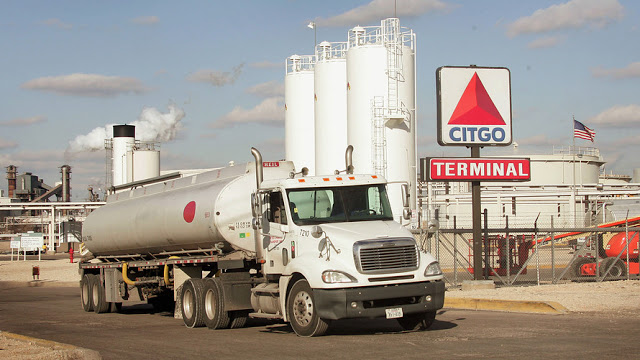 While the Western media repeatedly claims US sanctions have been reserved for Venezuelan officials only, the Washington Post itself would admit in an article titled, “Venezuela’s oil gives Maduro little leverage against the United States,” that (emphasis added):

“Seventy-five percent of cash-generating oil exports are coming here,” said Scott Modell, the managing director of Rapidan Energy and a former CIA officer in Latin America. Though Venezuela exports considerable amounts of crude oil to major diplomatic allies like Russia and China, almost all of the profits are used to service preexisting debts. “They don’t get cash for that, and they are desperate for cash,” Modell said.

Citgo’s ownership has long been a source of tension between the United States and Venezuela. In August 2017, the Trump administration signed an executive order that blocked the repatriation of dividends, and sanctions on Venezuelan officials have placed Citgo in an increasingly fraught position.

Just under half of PDVSA’s shares in the company were used as collateral for a $1.5 billion loan the Venezuelan government took out from Russian energy giant Rosneft in 2016. Foreign creditors have suggested they may try to acquire parts of Citgo to service their debts.

Modell said that there is debate in the United States about whether the U.S. government could seize the company itself. Some opposed this, arguing that Citgo should be an asset available for a post-Maduro Venezuela that could help provide a “petroeconomic recovery” for the ailing country.

It is clear that significant efforts have been made to cripple Venezuela’s ability to profit from its oil with even the US media and those it interviews admitting the US is unsure of just how far to go – realizing that once the damaging sanctions are reversed, remaining, intact infrastructure will allow Venezuela to “provide a “petroeconomic recover” for the ailing country.”

In other instances of economic warfare, large sums of Venezuelan gold have been withheld in the UK which refuses to return it to the Venezuelan government, The Times reports.

A Washington Post article titled, “Venezuela’s paradox: People are hungry, but farmers can’t feed them,” refers to the armed gangs merely as “criminals” but links to Venezuela Analysis which gives a fuller but contradictory version of events.

Venezuela Analysis’ article, “Venezuelan Farmers on Disputed Land Say They Have No Intention of Vacating,” depicts efforts by farmers to use land reclaimed from wealthy owners to produce agricultural goods, but who are targeted by hired mercenaries, attacked and driven off. In other cases, wealthy oligarchs are able to secure concessions from courts to consolidate control over farmlands used to produce food.

The Venezuelan government has been increasingly resorting to price controls and emergency measures to compensate in the face of overwhelming economic warfare but with varied success. 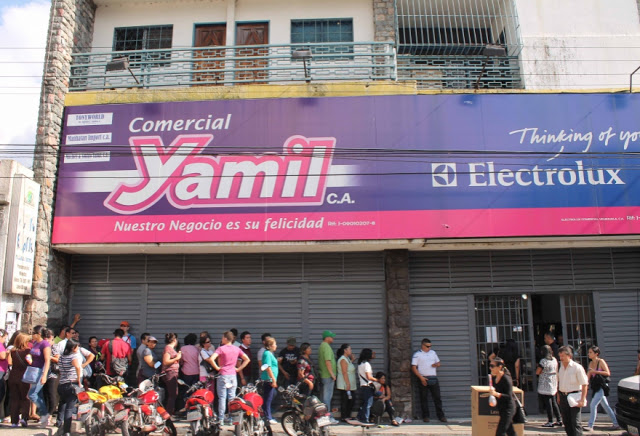 Economic destabilization is a key component in US regime change efforts – witnessed in all of Washington’s past and current confrontations including against Iraq, Libya, Syria, Iran, North Korea, and Russia for an array of alleged offenses centered around “human rights” and fabricated threats to US national security.

Conversely – nations like Saudi Arabia whom even former US Secretary of State Hillary Clinton admitted is “providing clandestine financial and logistic support to ISIL and other radical Sunni groups in the region,” and undeniably among the worst human rights abusers on Earth – has escaped not only sanctions, but even the most basic condemnation for its serial violations of international law and rights abuses.

This stark contrast helps illustrate the true, politically-motivated nature of US sanctions arrayed against targeted nations with but the thinnest rhetorical veneer applied to obtain public support.

Where even powerful nations like Russia and China must work for years to create alternatives to US-dollar domination across global finances – a nation like Venezuela already destabilized from decades of US-fomented chaos stands to suffer greatly in the face of sanctions and economic warfare – now coupled with another overt US-backed coup attempt.

Venezuela sits on an ocean of proven oil reserves. It has been openly slated for regime change by the US and has been for years with documented evidence proving the current opposition vying for power is funded by Washington, for Washington’s, not Venezuela’s benefit.

Sanctions and economic warfare have been aimed at Venezuela just as the US has done with the numerous other nations it has overthrown, invaded, and otherwise destroyed – or those that it is trying to overthrow and destroy.

There is no missing puzzle piece that makes Venezuela an exception to what is another textbook case of US-backed regime change.

Attempts to claim Venezuela’s crisis was precipitated by “socialism” – even if one is able to ignore the voluminous amounts of evidence proving US subversion has instead – still doesn’t add up.

China is also socialist – communist in fact – with a high degree of central planning and nationalized industry. It possesses the largest high-speed rail network on Earth, has a space program with the ability to launch people into orbit, and has the world’s second largest economy.

Conversely, the US hasn’t a single mile of high-speed rail, currently pays the Russian Federation to launch its astronauts into orbit, and has thoroughly squandered its place as largest global economy in pursuit of aspirations toward unrealized global domination.

There is clearly more that contributes to a nation’s success or failure than being “socialist” or “capitalist” – whatever either term even really means. For Venezuela, its failures are a direct and clear result of US imperialism. And only through exposing and rolling back US meddling, can Venezuela’s fortunes be reversed.