When Bolsonaro and Netanyahu Are ‘Brothers’: Why Brazil Should Shun the Israeli Model 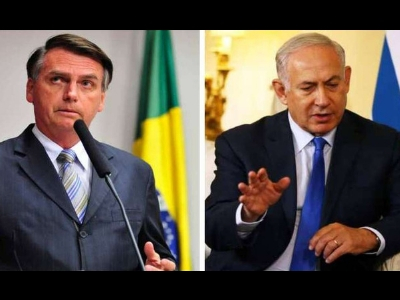 9 Jan 2019 – Newly-inaugurated Brazilian President, Jair Bolsonaro, is set to be the arch-enemy of the environment and indigenous and disadvantaged communities in his country. He also promises to be a friend of like-minded, far-right leaders the world over.

It is, therefore, not surprising to see a special kind of friendship blossoming between Bolsonaro and Israeli Prime Minister, Benjamin Netanyahu.

“We need good brothers like Netanyahu,” Bolsonaro said on January 1, the day of his inauguration in Brasilia.

Bolsonaro is a “great ally (and) a brother”, Netanyahu replied.

But, while Bolsonaro sees in Netanyahu a role model – for reasons that should worry many Brazilians – the country certainly does not need ‘brothers’ like the Israeli leader.

Netanyahu’s militancy, oppression of the indigenous Palestinian people, his racially-motivated targeting of Black African immigrants and his persistent violations of international law are not at all what a country like Brazil needs to escape corruption, bring about communal harmony and usher in an era of regional integration and economic prosperity.

Netanyahu, of course, was keen on attending Bolsonaro’s inauguration, which is likely to go down in Brazilian history as an infamous day, where democracy and human rights came under their most serious threat since Brazil launched its democratic transition in the early 1980s.

In recent years, Brazil has emerged as a sensible regional power that defended Palestinian human rights and championed the integration of the ‘State of Palestine’ into the larger international community.

Frustrated by Brazil’s record on Palestine and Israel, Netanyahu, a shrewd politician, saw an opportunity in the populist discourse parroted by Bolsonaro during his campaign.

The new Brazilian President wants to reverse Brazil’s foreign policy on Palestine and Israel, the same way he wants to reverse all the policies of his predecessors regarding indigenous rights, the protection of the rainforest, among other pressing matters.

What is truly worrying is that Bolsonaro, who has been likened to Donald Trump – least because of his vow to “make Brazil great again” – is likely to keep his promises. Indeed, only hours after his inauguration, he issued an executive order targeting land rights of indigenous peoples in Brazil, to the delight of the agricultural lobbies, which are eager to cut down much of the country’s forests.

Confiscating indigenous peoples’ territories, as Bolsonaro plans to do, is something that Netanyahu, his government and their predecessors have done without remorse for many years. Yes, it is clear that the claim of ‘brotherhood’ is based on very solid ground.

But there are other dimensions to the love affair between both leaders. Much work has been invested in turning Brazil from having an arguably pro-Palestinian government, to a Trump-like foreign policy.

In his campaign, Bolsonaro reached out to conservative political groups, the never truly tamed military and Evangelical churches, all with powerful lobbies, sinister agendas, and unmistakable influence. Such groups have historically, not only in South America but in the United States and other countries as well, conditioned their political support for any candidate on the unconditional and blind support of Israel.

This is how the United States has become the main benefactor for Israel, and that is precisely how Tel Aviv aims to conquer new political grounds.

The western world, in particular, is turning towards far-right demagogues for simple answers to complicated and convoluted problems. Brazil, thanks to Bolsonaro and his supporters, is now joining the disturbing trend.

Israel is unabashedly exploiting the unmitigated rise of global neo-fascism and populism. Worse, the once perceived to be anti-Semitic trends are now wholly embraced by the ‘Jewish State’, which is seeking to broaden its political influence but also its weapons market.

Politically, far-right parties understand that in order for Israel to help them whitewash their past and present sins, they would have to submit completely to Israel’s agenda in the Middle East. And that is precisely what is taking place from Washington to Rome to Budapest to Vienna … And, as of late, Brasilia.

But another, perhaps more compelling reason is money. Israel has much to offer by way of its destructive war and ‘security’ technology, a massive product line that has been used with lethal consequences against Palestinians.

The border control industry is thriving in the US and Europe. In both cases, Israel is serving the task of the successful role model and the technology supplier. And Israeli ‘security’ technology, thanks to the newfound sympathy for Israel’s alleged security problems, is now invading European borders as well.

According to the Israeli Ynetnews, Israel is the seventh largest arms exporter in the world and is emerging as a leader in the global export of aerial drones.

Europe’s excitement for Israel’s drone technology is related to mostly unfounded fears of migrants and refugees. In the case of Brazil, Israeli drones technology will be put to fight against criminal gangs and other internal reasons.

For the record, Israeli drones manufactured by Elbit Systems have been purchased and used by the former Brazilian government just before the FIFA World Cup in 2014.

What makes future deals between both countries more alarming is the sudden affinity of far-right politicians in both countries. Expectedly, Bolsonaro and Netanyahu discussed the drones at length during the latter’s visit to Brazil.

Israel has used extreme violence to counter Palestinian demands for human rights, including lethal force against ongoing peaceful protests at the fence separating besieged Gaza from Israel. If Bolsonaro thinks that he will successfully counter local crimes through unhinged violence – as opposed to addressing social and economic inequality and unfair distribution of wealth in his country – then he can only expect to exasperate an already horrific death toll.

Israeli security obsessions should not be duplicated, neither in Brazil or anywhere else, and Brazilians, many of whom rightly worry about the state of democracy in their country, should not succumb to the Israeli militant mindset which has wrought no peace, but much violence.

Israel exports wars to its neighbors, and war technology to the rest of the world. As many countries are plagued by conflict, often resulting from massive income inequalities, Israel should not be seen as the model to follow, but rather the example to avoid.