Here is what a West Bank Palestinian resident has to go through every time s/he tries to get out of home. 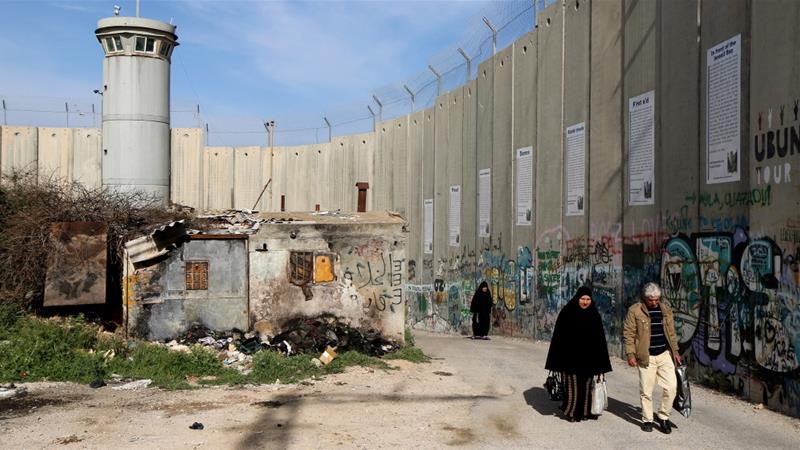 Palestinians walk next to the Israeli wall in Bethlehem city on March 27, 2015.
[Ahmad Al-Bazz/Activestills/Al Jazeera]

13 Feb 2019 – Under a debilitating siege for more than a decade, Gaza has been rightfully declared the biggest open-air prison in the world. But there is another, similar, prison in Palestine that is less obvious because it suffers from a different kind of siege, undeclared and indirect: the West Bank. Every Palestinian who resides there and holds official Palestinian identification papers is a prisoner in their own home.

Freedom of movement is non-existent for the vast majority of the population because of a myriad of Israeli policies aimed at restricting it to the bare minimum. The situation is certainly shocking yet seems to be largely ignored by the world, especially by our Israeli neighbours.

Movement and life in the West Bank are governed by the whims of the Israeli security apparatus, which has set up hundreds of checkpoints, gates, artificial barriers, forbidden and segregated roads and of course, the 700km separation wall, as the Israelis call it, or apartheid wall, as we call it.

So what is it like for a Palestinian who tries to go anywhere in the West Bank?

According to Israeli rights organisations B’Tselem, as of January 2017, there were 59 permanent checkpoints within the West Bank and 39 on its periphery to control the movement of people in and out of it.

Then there are the “flying checkpoints”, which the Israeli military sets up temporarily on any given Palestinian road. According to the United Nations Office for the Coordination of Humanitarian Affairs (UNOCHA), there were some 4,924 flying checkpoints on West Bank roads between January 2017 and July 2018 alone.

All this, in addition to hundreds of other barriers such as dirt mounds, concrete blocks and gates lying at the entrance to most villages in the West Bank.

Apart from that, Palestinians are barred from entering or using land (even if it’s theirs) within the so-called Area C – a territory outlined in the Oslo Accords where most illegal Israeli settlements are located and which constitutes about 61 percent of the West Bank.

For example, 270 of the entire 291 hectares that belong to the Palestinian village of Wadi Fukin near Bethlehem are designated as Area C. Palestinians who live there rely almost entirely on agriculture for their livelihood and struggle on a daily basis to access their lands. In fact, they have to get an Israeli permit to go work their land.

Talking about permits – Palestinians need one in order to leave the West Bank. Those are mainly given to people in important positions (big businessmen and politicians) who have the right financial records or political credentials and to poorer Palestinians, who provide Israelis with much-needed cheap labour, especially in the construction business.

The rest of the Palestinian population can only leave if they are issued a permit for medical or family reasons – and those are rare and easily revoked. In 2017, some 700,000 Palestinians (including labourers in Israel) applied for permits to leave the West Bank in total; about 560,000 got them and the rest were rejected.

You have probably guessed by now that all these restrictions imposed on the Palestinians have a disastrous effect on the economy. One World Bank paper estimated that placing one checkpoint a minute away from a town decreases employability of a Palestinian resident by 0.5 percent and his/her hourly wage by 5.2 percent.

The combined impact of all checkpoints in 2007 in the West Bank was a loss of $229m or six percent of its gross domestic product (GDP) in that year. Another World Bank study found that all these restrictions cost the local economy $3.4bn, or 35 percent of the GDP in 2011. And – if you’re wondering – the combined cost of all deleterious aspects of the Israeli occupation cost Palestinians $9.46bn (that was 74 percent of Palestinian GDP in 2014).

And this is just the economic impact; what about the human cost?

In the West Bank, you regularly run into people who have never entered Jerusalem, despite living less than an hour away. You would also meet many Palestinians who hold American or European passports, are able to travel most of the world without a visa, but find it impossible to get a permit to visit Jaffa, for example, which is just 20km away.

I have three Palestinian friends with foreign passports (French, American and Russian), whom I can never host in my house in Jerusalem. On paper, all three don’t need a visa to enter Israel (and the Palestinian territories), just like the hundreds of thousands of French people, Americans and Russians, who visit the place every year. But the Israeli authorities know they have Palestinian IDs, so they block them from entering; and since they are neither politically important nor rich, they can’t get a permit either. 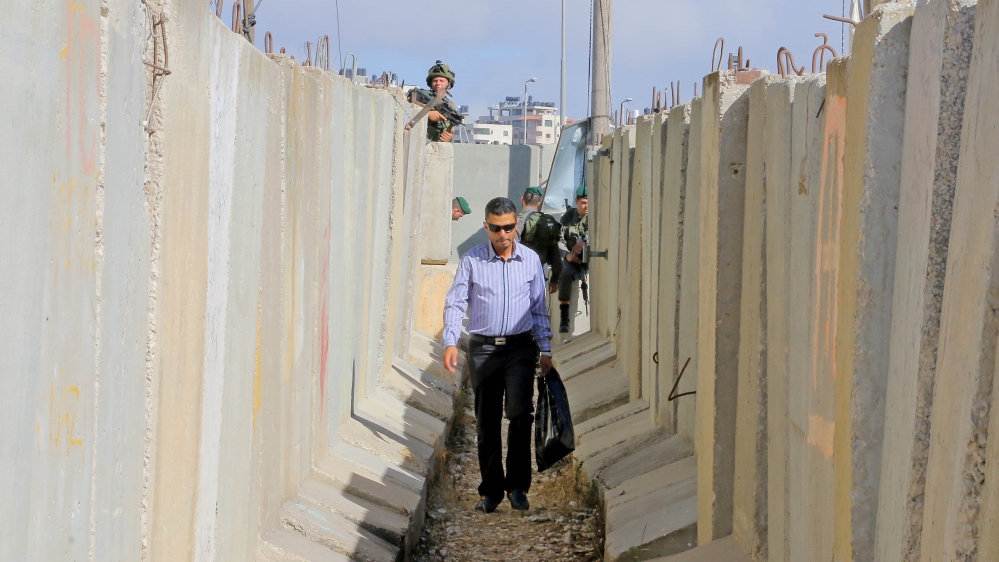 A Palestinian man walks away after not being permitted to cross the Qalandiya checkpoint, a main crossing point between Jerusalem and the West Bank city of Ramallah. Thousands of Palestinians headed to Jerusalem’s Al-Aqsa mosque for the first Friday prayer of the holy Muslim fasting month of Ramadan on June 10, 2016.
[Ahmad Al-Bazz/Activestills/Al Jazeera]

Apart from not being able to leave the West Bank, travelling within it is a nightmare. Checkpoints are arbitrarily opened and closed to control Palestinian movement. There is never an official reason given, but most of the time it is to facilitate traffic for Israeli settlers in the area, just to make our lives miserable or to impose a rather pernicious form of collective punishment on the Palestinian population.

The Beit El checkpoint at the northern entrance of Ramallah and Jaba at the southern one are two great examples. My friend Manar, who lives in Deir Dibwan, a village 4km outside of Ramallah, has to drive for an hour on average when there is no traffic to get to her job in the city. However, that commute gets exponentially longer when the Beit El checkpoint is closed to non-VIP card holders (and it often is). In theory, she can take multiple alternative routes that could cut the commute time down to 10 minutes, but those can be used only by Israelis.

David, a colleague of mine who commutes from Aboud, a Christian town about 18km northwest of Ramallah, is often late to work because “the gate was shut”. The gate is an unmanned Israeli installation at the entrance of Deir Ibzi town, just outside of Ramallah, which he has to pass through.

The frequent closure of that gate doubles or triples the distance for commuters in over 10 towns and villages lying within the Ramallah district. It gets closed quite often because it is meant to facilitate the movement of Israeli settlers at peak hours. So on any given day, that the gate would be shut, say, when David leaves Ramallah to go home at 4pm, it would still be shut at 5pm when his cousin tries to cross, and then it would be open again at 7pm, then shut around 10pm when his brother tries to cross.

There are also major checkpoints, such as Container and Za’tara, which can completely paralyse the West Bank. When Container is closed, it cuts off a third of the West Bank population living in the south, including big cities like Bethlehem and Hebron, from Ramallah and the north. Similarly, Za’tara checkpoint blocks traffic in and out of the entire northern regions of the West Bank, including cities such as Nablus, Tulkarem and Jenin.

I know of Christian families in al-Zababida, a Greek Orthodox town near Jenin, who, for example, have struggled to reach Bethlehem, just 85km away, for Christmas pilgrimage because of delays at the Za’tara and Container checkpoints. Meanwhile, foreign pilgrims can enter Bethlehem via eight different routes, including via Jerusalem, and on certain days can probably fly in from abroad and get there faster than Palestinian Christians.

But controlling Palestinian movement through checkpoints and other barriers is not enough for the Israelis, so they have taken to constructing alternative roads for us. There are, of course, al-Mu’arajat and Wadi al-Nar “highways”, connecting the north to the Jordan Valley and the south of the West Bank respectively, and now there is the newly opened Route 4370, commonly known as “apartheid road”, which connects the villages of Anata and Azzayim and which has a high concrete wall separating Jewish drivers from the Palestinian ones. All of the above-mentioned byways are designed to keep Palestinians off Israeli roads that cut through the West Bank, such as Highway 1 and Highway 60. 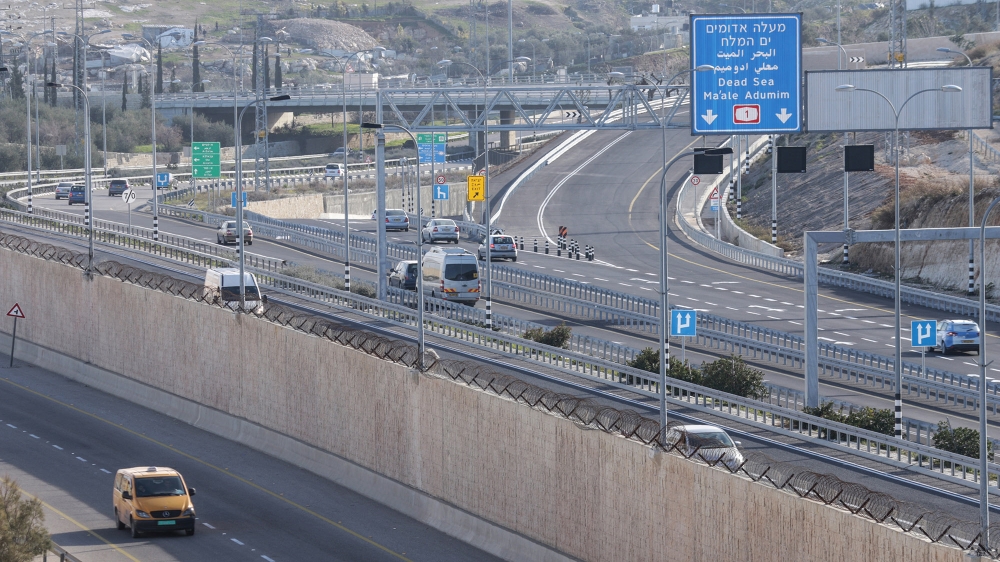 A Palestinian vehicle drives on a newly opened road with a wall segregating Palestinian traffic from the Israeli on Highway 1, near al-Zaayyim village, West Bank on January 23, 2019.
[Ahmad Al-Bazz/Activestills/Al Jazeera]

With the ever-changing closures, restrictions, separation and isolation, it is hardly surprising that it can feel really suffocating in the West Bank for many Palestinians. And, since many of us are unable to leave or go elsewhere, we should at least be able to find somewhere to breathe and relax in our own land. But even recreational spaces are becoming increasingly scarce in the West Bank.

Back in 2011, some friends and I went out to have a picnic in the hills of al-Walaja village in Bethlehem governorate. I remember walking down from the village, passing what many think is the oldest olive tree in the world, to get to Ein Haniya spring, where we sat down and had a wonderful time. Today, we can no longer go there. The spring was included in an Israeli national park area, a segment of the apartheid wall was built right near that tree, and a checkpoint was moved on the road just ahead of it, so now Palestinians can no longer pass.

These are just a few examples from my life of how my friends and I have been affected by Israel’s massive mechanism to control and limit Palestinian movement in the West Bank. But there are many others, and many that are worse.

Think of all the sick people who have suffered or died in traffic before reaching hospitals, all the relatives who have missed weddings or funerals, all the employees who have lost jobs because they’ve been late, all the poor farmers who have not been able to put bread on the table because they’ve lost all their produce stuck at a checkpoint for a whole day.

This is the suffocating and oppressive daily reality in our open-air prison called the West Bank.

Jalal Abukhater, a Jerusalemite, holds an MA in International Relations and Politics from the University of Dundee.

One Response to “Palestine’s Other Open-Air Prison”