As the militarisation of Kashmir has grown, so have victimisation and radicalisation. 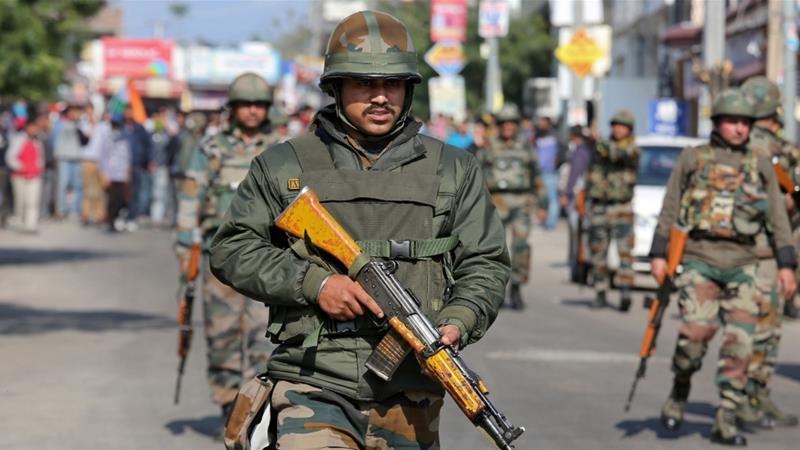 18 Feb 2019 – On February 14, 2019, a four-wheel drive loaded with 200kg of explosives rammed into a convoy of Indian armed forces in the Pulwama district of Indian-administered Kashmir. More than 40 soldiers were killed in the blast and many were injured.

Jaish-e-Mohammad (JeM), a fighter outfit based in Pakistan, claimed responsibility for the attack. The group has been banned since 2002 but is allegedly active through proxies.

The suicide bomber was a 22-year-old Kashmiri named Adil Ahmed Dar who had gone missing in the summer of 2018 and joined JeM. This is the heaviest loss encountered by the Indian forces since 1989 when agitation against Indian rule started.

The Indian government, politicians of all leanings, the masses, film celebrities, and media are united in denouncing Pakistan and Kashmiris. Many are clamouring to “avenge” the attack, using that specific word to express the response they want from the government.

Indian Prime Minister Narendra Modi warned the attackers and “their supporters” that they would be paying a “very heavy price” and that they had made a “big mistake”; he emphasised that Indian forces “have been given permission to take decisions about the timing, place and nature of their response…. This is an India of new convention and policy.”

His home minister, Rajnath Singh, reiterated that the country will come together to “avenge” the attack. The Central Reserve Paramilitary Force (CRPF), to which the soldiers belonged, tweeted: “We will not forget, we will not forgive. We salute our martyrs of Pulwama attack and stand with the families of our martyr brothers. This heinous attack will be avenged.”

Slogans that rent the air in Jammu, the predominantly Hindu province of Indian-administered Kashmir, include “shoot the traitor Kashmiris”. Mobs in the area attacked Muslim neighbourhoods and set their cars on fire. Reports of similar violence against Muslim Kashmiris, including students and businesspeople, are on the rise across Indian cities as well. The clamour for revenge for the attack is high; the drums of war are beating.

Adil Ahmed Dar, who carried out the deadliest bombing in the history of the struggle against India has been described as shy and kind by his family. They claimed a government militia called the Special Task Force had humiliated him in the past, detaining him and making him rub his nose on the ground.

The family mark this originary act of violence as a point of departure in Adil’s life, which, coupled with an already present anti-India sentiment, set the young man on a path of violence.

Stories of rank humiliation at the hands of Indian forces are common among Kashmiris, gender no bar. While India is denouncing Kashmiris as if they possess a gene for violence, it conveniently glosses over the run-up to the suicide bombing.

The last four years have been staggeringly brutal for Kashmiris and manifest what Modi called the “India of new convention and policy”.

The Indian strategy in Kashmir has always been about managing Kashmiri resistance to integration with India. While human rights abuses by the Indian forces have been persistent, starting in 2014 when Modi was elected, they have intensified in brutality and frequency. Young people expressing their dissent have been routinely harassed and incarcerated. The use of the Public Safety Act (PSA), denounced as the “lawless law” by Amnesty International, has been rampant. The number of political prisoners in Kashmir is in the thousands and they include juveniles who have no legal protection.

In 2016, a major uprising broke out in Kashmir following the killing of rebel leader Burhan Wani, who belonged to the Hizbul Mujahideen and who had his own story of humiliation at the hands of the Indian military before deciding to join an armed group.

Following his killing, Kashmir never seemed to recover. The Indian government has repeatedly suppressed peaceful means of protest. The Kashmiris’ demand for the right to self-determination has been met with indiscriminate military force and incessant curfews. That year, more than 75 people were killed and over 11,000 were wounded.

The use of pellet guns for crowd control has also intensified, which led to what is now known as the world’s first case of mass blinding. Among the wounded and blinded Kashmiris have been women and young children.

In 2017, the Indian home ministry approved Operation All Out, which is a joint counterinsurgency offensive between different sections of the Indian armed forces to crack down on Kashmiri resistance. As a result, there was an increase in killings of both combatants and civilians, cordon and search operations, incarcerations, and censorship.

In justifying the killing and blinding of unarmed protesters and ordinary civilians, the government has labelled them “agitational terrorists” and “overground workers”.

2018 was the deadliest year of the past decade during which at least 160 civilians, 267 fighters and 159 army soldiers were killed.

The Indian government does not seem to consider the human rights violations it commits in Kashmir as falling within the purview of international humanitarian law or international criminal law. It has failed to respond to repeated criticism by human rights organisations.

In June 2018, the UN Human Rights Office released a report taking account of the situation in the region of Kashmir on both sides of the Line of Control, but especially focusing on Indian brutality in Kashmir. The outgoing UN High Commissioner for Human Rights Zeid Ra’ad Al Hussein stated: “The political dimensions of the dispute between India and Pakistan have long been centre-stage, but this is not a conflict frozen in time. It is a conflict that has robbed millions of their basic human rights, and continues to this day to inflict untold suffering.”

India denounced the report as fallacious, tendentious, and motived – effectively shutting down any public discussion or accountability for the report.

Unsurprisingly, with the increasing militarisation of Kashmir and the Indian government’s failure to address human rights violations, fighter recruitment has seen an uptick, as well-educated Kashmiri youth from upper-middle-class homes with good careers are choosing to join armed groups.

The policy of the Indian government towards Kashmir has been to replace one technology of punishment with another while sustaining the political status quo. The political conglomerate body called the Hurriyat – comprising 28 parties – which fronts the resistance movement is severely undermined and the voices of Kashmir’s strong civil society presence are muzzled.

At this juncture, condemnations of the attack are pouring in from the international community and India is basking in righteous posturing, conveniently and in plain sight hiding its brutal military occupation of Kashmir.

The already demonised Kashmiri is being further demonised. The movement that Kashmiris call “Tehreek” (revolution) is being re-painted with the monochromatic brush of the erroneous stereotype of “Islamic terrorism” and reduced to being Pakistan’s proxy.

It is unfortunate that such stereotypical shorthand will find an audience, thus preventing the international community capable of empathetic investigation from seeking an answer to the simple question: Why would a Kashmiri offer himself as a human bomb?

Under the Indian rule, having patiently clamoured for the UN-mandated self-determination for decades since 1947 and suffering erosions to the autonomy thrust upon them through the dubious instrument of accession, the Kashmiris are increasingly losing faith in the tools of justice and liberty that this world has to offer.

Ather Zia is a poet and a political anthropologist who teaches at University of Northern Colorado Greeley.