The Hunterston B reactors in Ayrshire are the oldest in Europe, and dangerous cracks have been found.

8 Mar 2019 – Bottom of FormThe two reactors at Hunterston B nuclear power plant near Ardrossan are 43 years old – the oldest in Europe.

They’re already well beyond their operating lifetimes, which have twice been extended by EDF Energy, and they’re scheduled to close down for good in 2023.

However, there’s a serious safety fault in the reactors. The fault is known as keyway root-cracking: where the graphite moderator cores in the reactors develop cracks leading to instabilities that could lead to a major nuclear accident: which would lead to a large swathe of Scotland’s central belt having to be evacuated.

“In the very worst case the hot graphite core could become exposed to air and ignite leading to radioactive contamination of…the metropolitan areas of Glasgow and Edinburgh.”

The reactors have been closed since October 2018 as a result, but owners EDF Energy are currently making a case for turning them back on, with help from trade union GMB.

Although the probability of a meltdown is still low, the consequences could be incredibly severe. In such an event, both Glasgow and Edinburgh would need to be entirely evacuated due to radioactive contamination.

According to Dr Ian Fairlie, an independent consultant on radioactivity in the environment, and Dr David Toke, Reader in Energy Policy at the University of Aberdeen, the two reactors definitely should not be restarted. Speaking about the cracks in the barrels, they say:

“This is a serious matter because if an untoward incident were to occur – for example an earth tremor, gas excursion, steam surge, sudden outage, or sudden depressurisation, the barrels could become dislodged and/or misaligned.

“These events could in turn lead to large emissions of radioactive gases. Further, if hot spots were to occur and if nuclear fuel were to react with the graphite moderator they could lead to explosions inside the reactor core. 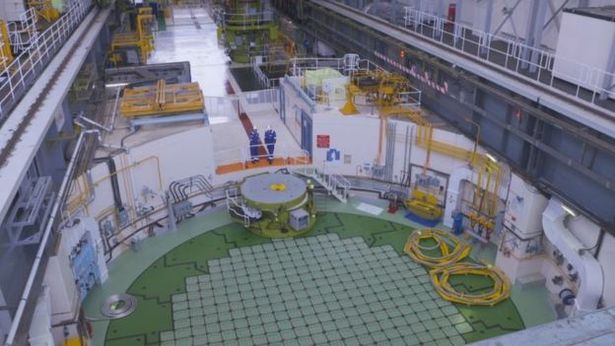 “In the very worst case the hot graphite core could become exposed to air and ignite leading to radioactive contamination of large areas of central Scotland, including the metropolitan areas of Glasgow and Edinburgh.”

Station Director Colin Weir said: “Nuclear safety is our overriding priority and reactor three has been off for the year so that we can do further inspections.

“We’ve carried out one of our biggest ever inspection campaigns on reactor three, we’ve renewed our modelling, we’ve done experiments and tests and we’ve analysed all the data from this to produce our safety case that we will submit to the ONR.

“We have to demonstrate that the reactor will always shut down and that it will shut down in an extreme seismic event.”

The operational limit for the latest period of operation was 350 cracks but an inspection found that allowance had been exceeded.

EDF plans to ask the regulator for permission to restart with a new operational limit of up to 700 cracks.