John Dean: I Testified Against Nixon. Here’s My Advice for Michael Cohen.

My appearance before Congress helped take down a president. Will the same thing happen to Trump? 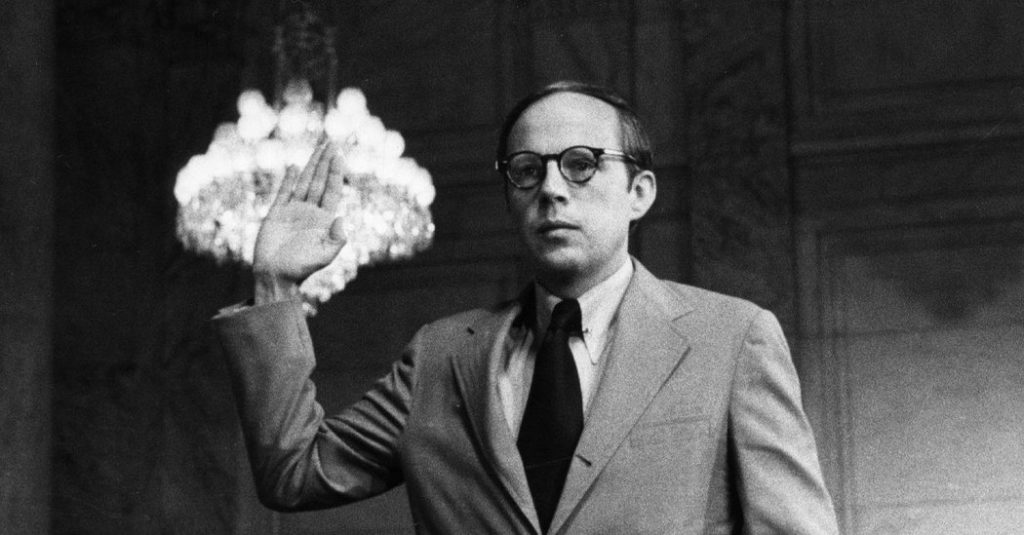 1 Mar 2019 – There are several parallels between my testimony before Congress in 1973, about President Richard Nixon and his White House, and Michael Cohen’s testimony this week about President Trump and his business practices. Setting aside the differences regarding how we got there, we both found ourselves speaking before Congress, in multiple open and closed venues, about criminal conduct of a sitting president of the United States. This is not a pleasant place to be, particularly given the presidents involved.

Polls varied widely after my testimony. One said 50 percent of Americans believed me, 30 percent did not, and 20 percent were not sure. Another poll had 38 percent believing the president, who denied my statement, and 37 percent believing me. The instant polls on Mr. Cohen’s testimony vary by party affiliation, as was the case with my polls. But 35 percent found him credible. I believe that number will grow.

While my testimony was eventually corroborated by secret recordings of our conversations made by Mr. Nixon, before that it was other witnesses who made the difference. I was surprised by the number of people who surfaced to support my account. The same, I suspect, will happen for Michael Cohen. The Mafia’s code of omertà has no force in public service. I have heard no one other than Roger Stone say he will go to jail for Donald Trump.

Mr. Cohen should understand that if Mr. Trump is removed from office, or defeated in 2020, in part because of his testimony, he will be reminded of it for the rest of his life. He will be blamed by Republicans but appreciated by Democrats. If he achieves anything short of discovering the cure for cancer, he will always live in this pigeonhole. How do I know this? I am still dealing with it.

Just as Mr. Nixon had his admirers and apologists, so it is with Mr. Trump. Some of these people will forever be rewriting history, and they will try to rewrite it at Mr. Cohen’s expense. They will put words in his mouth that he never spoke. They will place him at events at which he wasn’t present and locations where he has never been. Some have tried rewriting my life, and they will rewrite his, too.

I am thinking of people like Mr. Stone, the longtime Trump associate who worked on the 1972 Nixon campaign and so admires the former president that he has a tattoo of the man’s likeness between his shoulder blades. Mr. Stone, whom I never met while at the White House, has been indicted as part of the inquiry by the special counsel, Robert Mueller, on charges of lying to Congress about his efforts to contact WikiLeaks during the 2016 presidential campaign.

He prides himself as a political dirty trickster, and he has never met a conspiracy theory he did not believe. Mr. Cohen can be sure that Mr. Stone will promote new conspiracy theories to defend Mr. Trump and himself, even if it means rewriting history. Presidential scandals tend to attract a remarkable number of dishonest “historians.”

There is one overarching similarity that Mr. Cohen and I share. He came to understand and reject Mr. Trump as I did Mr. Nixon.

Mr. Nixon first called on me regarding Watergate some eight months after the arrests of his re-election committee operatives at the Watergate. We had 37 conversations, and when I felt I had his confidence, I tried but failed to get him to end the cover-up. The day I told Mr. Nixon there was a cancer on his presidency was the day I met the real Nixon. I knew I had to break rank.

Mr. Cohen has likewise come to see Mr. Trump for his true nature. At the very end of his testimony before the House Oversight Committee, he sought permission to read a closing statement.

He thanked the members, and again accepted responsibility for his bad behavior. He then told the legislators, “Given my experience working for Mr. Trump, I fear that if he loses the election in 2020 that there will never be a peaceful transition of power, and this is why I agreed to appear before you today.” This was the most troubling — actually, chilling — thing he said in his five hours before the committee.

Since Mr. Cohen’s warning came in his closing words, there was no opportunity for committee members to ask follow-up questions. So I double-checked with his lawyer, Lanny Davis, if I had understood Mr. Cohen’s testimony correctly. Mr. Davis responded, “He was referring to Trump’s authoritarian mind-set, and lack of respect for democracy and democratic institutions.”

Indeed, what is most similar about my and Mr. Cohen’s testimony is that we both challenged authoritarian presidents of the United States by revealing their lies and abuses of power. Mr. Trump is the first authoritarian president since Mr. Nixon, and neither he nor his supporters will play fair. Mr. Cohen will be dealing with these people the rest of his life.

In fact, all Americans are affected by the growing authoritarianism that made Mr. Trump president. These people who facilitated his rise will remain long after Mr. Trump is gone. We need to pay more attention.

John W. Dean, who served as White House counsel under Richard Nixon, is the author of Conservatives without Conscience, which he is revising to discuss Donald Trump and his followers in collaboration with Bob Altemeyer, a retired professor of psychology at the University of Manitoba, a leading expert on authoritarianism.

3 Responses to “John Dean: I Testified Against Nixon. Here’s My Advice for Michael Cohen.”