Why Has Kashmir Been Forgotten?

Amid all the talks of India-Pakistan war, the issue at the very heart of present tensions has been completely ignored. 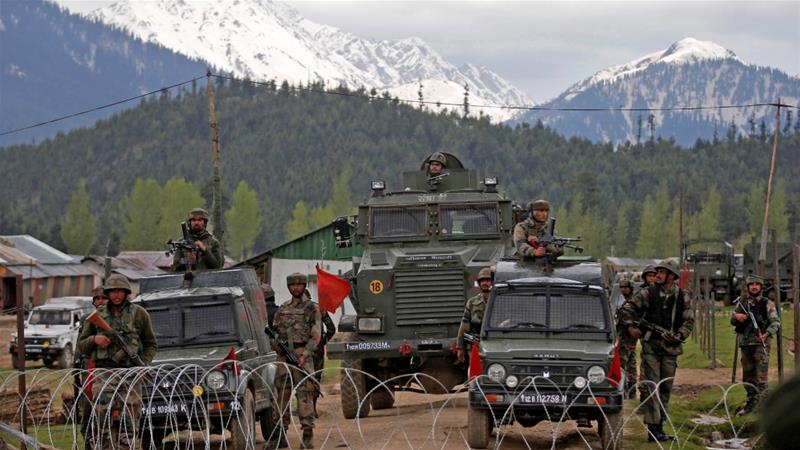 Kashmir is one of the most heavily militarised zones in the world. [Reuters/Danish Ismail]

2 Mar 2019 – “What are they saying about jung [war] over there? Does it look like it will happen?” For days now our families in Kashmir have been asking us the same questions, hoping that here in New Delhi, we would have some answers.

Uncertainty and fear took over our home region on February 14, when a suicide attack in the Pulwama district of Indian-administered Kashmir killed more than 40 Indian soldiers. We were quickly and collectively denounced as national traitors, harassed and attacked across Indian cities. The Indian media and political elite called for “revenge” and started beating the drums of war.

The Indian government imposed a curfew, cut down the speed of the internet and deployed more troops in Kashmir. The police and security agencies carried out hundreds of overnight raids, arresting political leaders and activists. Jamaat–e-Islami, a political and religious organisation, was banned.

Meanwhile, the Indian military was put on high alert and raids were launched on targets in Pakistan, which prompted a Pakistani response. Heavy shelling across the Line of Control (LoC) which separates Indian- from Pakistan-administered Kashmir began.

Many Kashmiris were forced to flee, others started to stock up on food and other basic goods, fearing an escalation. Big red crosses were painted on rooftops of hospitals in the hope that the fighter jets constantly circling above would not hit them.

The Kashmiri people, who have already lived through decades of daily aggression against their bodies, homes, psyches, and memories, are now facing the real possibility of an all-out war.

It is in such circumstances that our families have been calling and messaging us from miles away, hoping to hear from us some soothing words. Every day, they have been recounting how their nights are spent counting the number of jets in the sky. Every day, we have been wondering if we should go home and face the war together with our loved ones.

Meanwhile, headlines about an India-Pakistan “confrontation”, “escalation” and an “impending war” have been dominating local and international media. News broadcasts have followed every detail of the Indian and Pakistani military actions, the attacks and the counter-attacks, the claims and the counter-claims. Reporters have documented every statement, every new development. Pundits have dissected every aspect of the conflict – from war capabilities to army structure, to weaponry and from military strategies to geopolitical realities.

Yet somewhere in all this noise about conflict and war, a simple fact has been left out: that Kashmir is the place where it is all being fought out. The Kashmir issue and the plight of Kashmiri people have been somehow rendered irrelevant, even though the current conflict between India and Pakistan has everything to do with the disputed region.

There was a certain irony in calls by Indian officials and public figures calling for Pakistan to uphold the Geneva Convention in its treatment of the captured Indian pilot. In Kashmir, India has failed to apply not just the Geneva Convention, but much of international law for that matter. Kashmiris are still being jailed on political charges and used as human shields, while the United Nations resolution which mandates a referendum on self-determination to be conducted in Kashmir is yet to be implemented.

The current anti-war activism in India is limited to small demonstrations and #NoToWar posts on social media. The elephant in the room is once again being ignored. No one is talking about what true peace would actually entail.

Dominant narratives propagated by the Indian state and the mainstream media are muffling Kashmiri voices. At this moment, it is important to hear them speak and tell their stories of war. The killings, torture, enforced disappearances, sexual violence, mass blinding through the use of pellet shotguns, and everyday harassment in Kashmir cannot be swept under the carpet and ignored. This violence needs to be made visible because continuing or escalating the current security policies of the Indian government will only result in disaster.

Indians have to realise that there will be no peace until the Kashmir issue is resolved. If they truly want “no war”, then they have to push first and foremost for the demilitarisation of Kashmir. And if they want international law respected, they should do so as well and hold the plebiscite mandated by the UN. Kashmiris should be allowed to decide their own fate.

Samreen Mushtaq is a researcher based in New Delhi.

Mudasir Amin is a researcher based in New Delhi.