A Cathedral and a Mosque Engulfed in Fire; One Ravages the Past, the Other Threatens the Future

17 Apr 2019 – The world reacted with shock to the fire that engulfed the Notre Dame Cathedral. A symbol of Paris, this 13th Century architectural marvel is home to precious historical religious relics and artwork; made even more famous throughout the world by Victor Hugo’s famous novel, The Hunchback of Notre-Dame.

World leaders were quick to react to the tragedy of this fire.  News headlines around the world brought this disastrous incident to every living room around the globe and nations commiserated with the French. The inaudible sigh of relief was palpable when the structure was saved and with it, the history that laid within the walls. The past was not lost.

But another fire may well stop the future. Concurrent with the fire that ravaged Notre Dame, another historical place of worship, the al Aqsa mosque in Jerusalem fell victim to a fire of an unknown origin. The Mosque which was completed in 705 CE, is the third holiest site in Islam. But its fate is not shared by Moslems alone – it touches us all. 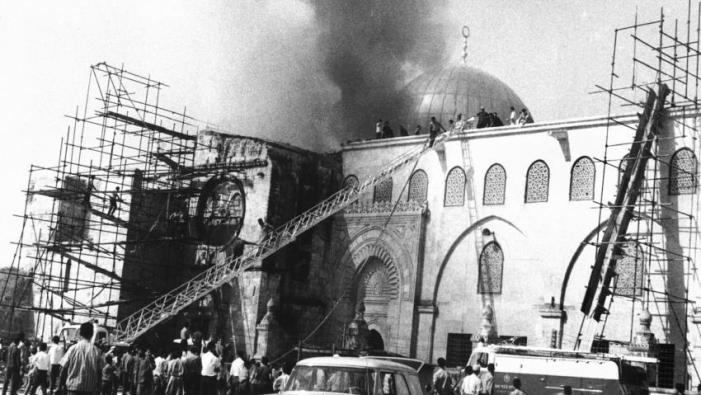 The world can be forgiven for their ignorance of this tragedy – and the importance of al Aqsa. The media simply dismissed it, as it does with all things that must be kept from the general public. This is not the first fire that was left unmentioned by mainstream media (MSM). A previous fire set to the Mosque by a zealous Australian Christian in 1969 failed to capture headlines. Indeed, the threats to al Aqsa Mosque have accelerated over the years to a point of no return. Given that the fate of this Mosque holds the fate of us all, how can the media be forgiven for their deafening silence?

In 2006, the Israeli government began work on an exact replica of the Hurva synagogue on its original site. The rebuilding of the Hurva is designed to usher in the rebuilding of the Third Temple. Rabbis were tailored for the special kind of garments they would be wearing in a “rebuilt temple” – the ‘end of time’. But the Mosque still stands in the way of building the Third Temple – for now.[i]

It took four years to complete the work on Hurva. When presidential candidate, Barack Obama promised AIPAC an undivided Jerusalem in 2008, the building of the Hurva synagogue was well on the way – which signaled continued future attacks on the al-Aqsa Mosque to make way for construction of the Third Temple.

In 2009, Israeli news headlines reassured Israelis that “Netanyahu would build the Third Temple”. Soon after, in 2010, JTA reported that “Our Land of Israel” party had put posters on 200 city buses in Jerusalem showing an artist’s rendition of the Third Temple on the al-Aqsa Mosque site with the slogan, “May the Temple be built in our lifetime.” 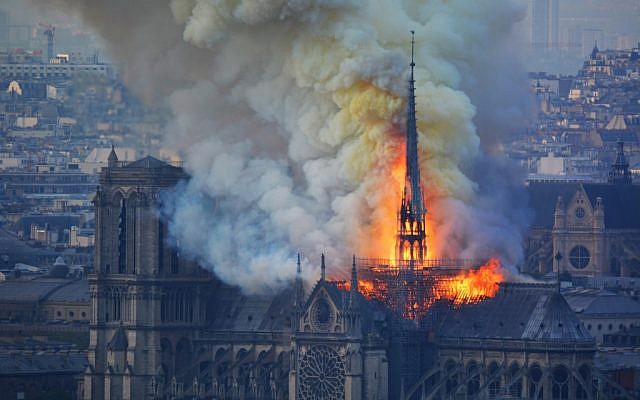 Donald Trump deliverance on Obama’s promise has made these fanatics more hopeful. How could they not be with Senator Broxon telling a cheering crowd

“Now, I don’t know about you, but when I heard about Jerusalem — where the King of Kings where our soon coming King is coming back to Jerusalem, it is because President Trump declared Jerusalem to be capital of Israel”.

And how do we ignore Benjamin Netanyahu taking ownership of Jerusalem stating that the Bible, the holy book for Jews and Christians, had justified it. Should we then be surprised that rabbis sent a letter of gratitude to Trump, praising him for “fulfilling prophecies”.

In March, as Israeli elections were approaching, it was reported that “The Israeli Third Temple” party had gained traction. And while the mainstream media can ignore the latest fire that broke out at the al Aqsa mosque on April 15, can we afford to ignore the blazing headlines of the same day: “END OF THE WORLD: Jerusalem third temple ‘fulfills Biblical prophecy’ of the end times” and other Israeli news ushering in the building of the Third Temple and the ‘end of times’?

Some may take comfort in the fact that this is all sheer madness, but one cannot ignore the insanity of which we were warned of by Warner D. Farr, LTC, U.S. Army who in 1999 reported his findings in the “Counterproliferation papers, Future Warfare Series No. 2, USAF Counterproliferation Center”.  This fascinating report, among other things, sounded the alarm over the probability of Gush Emunim, a right- wing religious organization, or others, hijacking a nuclear device to “liberate” the Temple Mount for the building of the third temple.  This is powerful insanity with insane powers enabling it.

Is the world ready to embrace this madness and accept this fate at this juncture? Are you?

Soraya Sepahpour-Ulrich is an independent researcher and writer with a focus on U.S. foreign policy and the role of lobby groups in influencing US foreign policy.