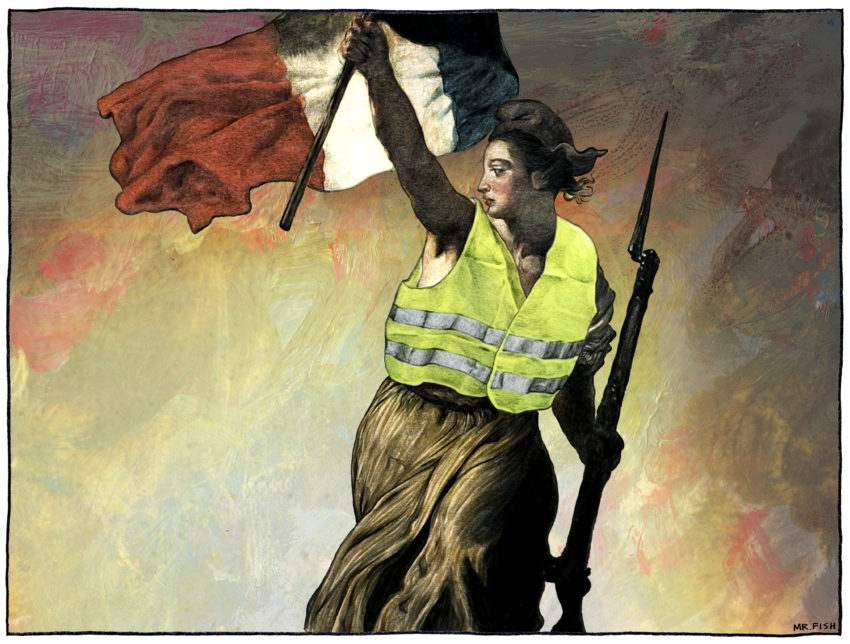 1 Apr 2019 — In the small chapel to the right at the entrance of the neoclassical Church of Saint-Sulpice is a large mural by Eugène Delacroix. The painter, at the end of his career and suffering from the tuberculous laryngitis that would soon kill him, depicted a story from Genesis. “Jacob is travelling with the flocks and other gifts he is taking to his brother Esau in the hope of appeasing his anger,” Delacroix wrote in 1861 when the painting was completed. “A stranger appears, blocking his path, and engages him in a fierce struggle – The holy books see this struggle as a symbol of the trials God sometimes sends His chosen ones.”

Delacroix shows the stranger—an angel—and Jacob wrestling in a sunlit clearing in a thick forest. Jacob, bent with exertion, the muscles on his back tense, attempts to push back against the angel, who stands implacably upright. The mural, created with layers of paint and bold, thick brush strokes that would later inspire the Impressionists, was Delacroix’s final testament to the inherent struggle—a struggle he was acutely aware he would soon lose—with mortality.

Delacroix asks us what constitutes victory in life. What gives life meaning? How are we to live? Why struggle against forces that we can never overcome? In the biblical story, Jacob is crippled in the long night’s fight, then blessed at dawn by the departing angel. He begs the angel’s name. But that name remains unspoken. Delacroix painted the inscription “Deliver me out of the mire, and let me not sink,” from Psalm 69, over the entrance to the Chapel of the Holy Angels, which holds two other murals by Delacroix portraying clashes with angels. On the ceiling is the Archangel Michael driving the demons from heaven. On the wall opposite Jacob and the angel, Heliodorus is attacked by angels as he attempts to steal the treasures from the temple in Jerusalem. A large window in the church’s stone wall spills sunlight over the paintings.

“Painting taunts and torments me in a thousand ways,” Delacroix wrote in his journal in 1861, seven months before completing his work at Saint-Sulpice. “… [T]hings that seemed to be the easiest to overcome present appalling, interminable difficulties. How is it, then, that instead of casting me down, this eternal combat lifts me up, not discouraging, but consoling me?”

Our worth is determined, the painter attempts to show us, not by what we do in life, but by what we do with what life gives us. It is the ferocity and steadfastness of the struggle that exalt us, especially when we comprehend that victory is ultimately impossible. This wisdom would be echoed by Albert Camus almost a century after Delacroix when he wrote that life required us to “être à la hauteur de son désespoir”—rise up to the level of our despair.

Three Saturdays ago France experienced its 18th consecutive weekend protest by the gilets jaunes, or “yellow vests,” against President Emmanuel Macron’s austerity measures, tax cuts for the wealthy and privatization of public services. Members of the masked and violent Black Bloc had infiltrated the yellow-vest protest on the Champs-Élysées. A few dozen Black Bloc people smashed windows of luxury shops and torched Le Fouquet, one of the city’s best-known restaurants. Police, who inexplicably waited to intervene, eventually used rubber bullets, tear gas and water cannons to disperse the protesters. The images of the clashes and property destruction were repeatedly broadcast throughout the following week. The police chief would be fired. Macron, who during the mayhem was skiing in the Pyrenees, would ban protests on the Champs-Élysées and order 6,000 counter-terrorism soldiers deployed outside government buildings. The pleadings by yellow-vest organizers for Black Bloc activists to separate themselves from the nonviolent protests were effectively drowned out by the state’s successful demonization—bolstered by the broadcast media—of the protest movement as a threat to public order and security.

As clashes took place on the Champs-Élysées, some 20,000 demonstrators thronged the streets outside the old Paris Opera House to protest the government’s refusal to address the crisis of global warming. My wife and I were in this nonviolent crowd, which was largely ignored by the press for the more colorful scenes of newspaper kiosks going up in flames on the Champs-Élysées.

The Black Bloc in France, as in the United States, is a gift to the security and surveillance apparatus. I suspect the French police waited to intervene until the camera crews could get enough dramatic footage. The goal of any counterinsurgency campaign is to villainize protest movements, paint them as violent and dangerous to limit their appeal, reduce their numbers and use them as justification to ban any dissent.

“We are attached to constitutional rights, but we’ve got people who through all means quite simply want to make a wreck of the republic, to break things and destroy, running the risk of getting people killed,” Macron said after the disturbances.

The yellow vests returned the next weekend in Paris and other cities in France. But the numbers had fallen by half. The peaceful marches were again disrupted by Black Bloc activists, shattering windows and throwing bottles. The yellow-vest protesters deride the Black Bloc contingents as the casseurs, or wreckers. Yellow-vest marchers have taken to waving white flags as a symbol of nonviolence. It appears to be a losing battle.

France has been in an official state of emergency since the 2015 terrorist attacks in Paris. The current crisis has only increased the presence of squads of heavily armed soldiers patrolling the city. The threat of terrorism, whether from radical jihadists or cliques of Black Bloc activists, is used by France and other states that seek to crush basic civil liberties and dissent in the name of national security. Macron, who is deaf to the plight of the working class and serves as a French instrument for the global social inequality orchestrated by corporate elites, is pushing significant sectors of the population off the streets and into the arms of the neofascist Marine Le Pen, with whom our corporate masters can make an accommodation, just as they have with Donald Trump. What they fear is a popular uprising. What they fear is losing power. If it takes alliances with repugnant neofascists and demagogues to retain control they will make them.

The brutality of our corporate executioners grows by the day. They will stop at nothing, including wholesale murder, to consolidate power and amass greater profits. Blinded by hubris, driven by greed, disdainful of democracy, foolishly believing their wealth will protect them, they will herd us over the cliff unless they are overthrown.

Delacroix was right. It is the struggle that matters. Not the outcome. I was where I should have been that Saturday in front of the Paris Opera House. Yes, our cries were not heard. Yes, it may be futile. But the fight is what makes us human. It gives us dignity. It affirms life in the face of death. “This eternal combat” brings with it, as the painter knew, a strange kind of consolation that lifts us up to the level of our despair.

One Response to “Gilets Jaunes/Yellow Vests: Only the Struggle Matters”