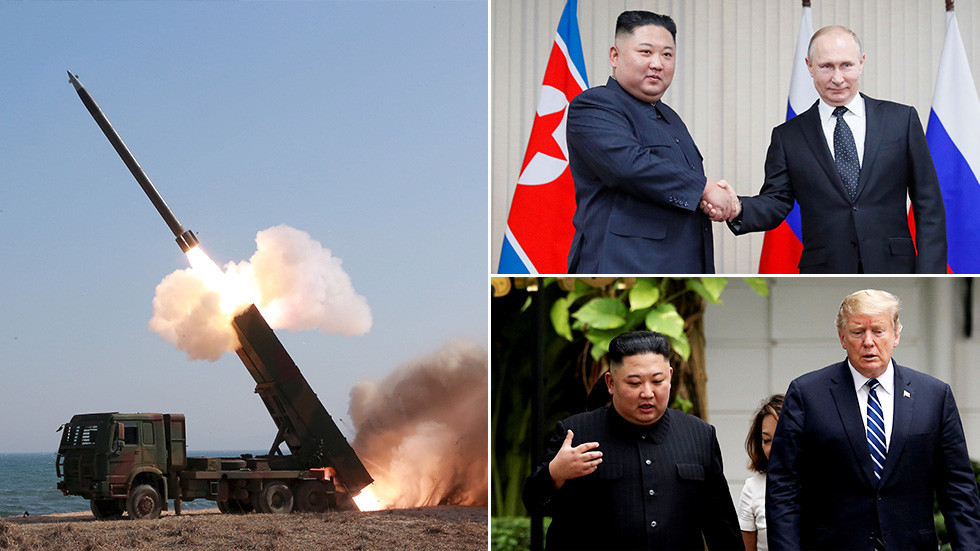 26 Apr 2019 – The summit between North Korean leader Kim Jong-un and President Vladimir Putin was significant on various levels and reaffirms the onset of a multipolar world.

Knowing your enemies and understanding your friends is a maxim to live by. At the level of nation states, at a historic moment, defined by Gramsci’s rather overused but nonetheless prescient formulation, “the old is dying and the new cannot be born,” it is more than a rule to live by, it is a prerequisite of survival.

Failing to understand their enemies was central to the grim fate that befell Saddam Hussein, Muammar Gaddafi and the countries they led, Iraq and Libya. Thus far, the North Koreans, led by Kim Jong-un, have not allowed themselves to go down the same path.

On the contrary, the bullish stance of the North Koreans in the face of Washington’s attempt at a cynical manoeuvre when it comes to the denuclearization of the Korean Peninsula, agreed at the landmark Singapore Summit between Kim and President Trump in 2018, confirms that Pyongyang is a place where history is viewed as a guide to the present and future, and not merely a reference to the past.

Conveniently elided in this cynical sleight of hand is the US nuclear umbrella that remains in place over the Peninsula with the ‘stated’ purpose of guaranteeing the security of South Korea and Japan, key US regional satellites (allies, if you prefer). Unstated, and for obvious reasons, is the more crucial purpose of upholding regional hegemony with particular emphasis on the containment of China.

The diminution of goodwill over the continuing deadlock after the Hanoi Summit in February, which failed to produce any compromise over denuclearization and the lifting of sanctions, has been exacerbated by Mike Pompeo’s recent testimony at a US subcommittee hearing during which, in response to a question, he referred to North Korean leader Kim Jong-un as a “tyrant”.

Pyongyang, in response, demanded that Pompeo is no longer be involved in any further negotiations or talks. North Korean foreign ministry spokesman, Kwon Jong-gun, accused the US Secretary of State of lacking maturity, being “reckless”, and stating that if Pompeo remains involved “the table will be lousy once again and the talks will become entangled.”

Coming back to the summit in Vladivostok, Kim’s first ever visit to Russia was reaffirmation of the longstanding fraternal ties that exist between Moscow and Pyongyang, stretching back to the Soviet era, and reflective of Russia’s emergence as a geopolitical and diplomatic counterweight to Washington in the here and now.

More: ‘We have no secrets from US’: Putin says he is ready to tell Trump about Kim talks

The anti-hegemonic thrust of Russia’s foreign policy, measured most prominently in its successful military and diplomatic intervention in the conflict in Syria, provides states such as the DPRK, which have long sat in the crosshairs of US-led Western imperialism, with sufficient reason to place trust in Moscow’s capabilities. This is not forgetting Russia’s successful (at least up to this point) navigation of an unprecedented political crisis in Washington that evinces no sign of abating – wherein rampant and unhinged Russophobia has turned the US political and mainstream media establishment inside out and upside down.

Moscow, to be sure, has vested interests of its own with respect to the trajectory of events on the Korean Peninsula. The fact is that Russia shares a land border with the DPRK, albeit small, dictating that denuclearization is also of vital importance to the Kremlin.

Ultimately, and understandably, Pyongyang’s growing desperation for sanctions relief after the aforesaid February Hanoi Summit between Kim and Trump ended in failure, was front and centre during the two days of meetings.

We must here be mindful of the distinction between UN sanctions and US unilateral sanctions. The former were agreed by the UN Security Council and first introduced in 2006, primarily targeting the DPRK’s nuclear program. The latter, meanwhile, are an exercise in economic asphyxiation, designed to bring the country to its knees with the wholesale immiseration of its people.

As things stand, the sanctions have inarguably wrought significant damage to the DPRK economy. In July 2018, the Bank of Korea, Seoul’s central bank, published a report on the impact they were having, estimating that the Pyongyang’s real annual gross domestic product suffered a 3.5 percent fall in 2017, while its exports declined by a massive 37.2 percent.

Read More: China, Russia… ‘we all have to get rid’ of nukes, Trump says amid reports he eyes arms control deal

This being said, there is no evidence of famine or mass starvation in the country according to South Korean intelligence and various other agencies engaged with the issue. This is no doubt in partly down to the North’s sanction-evading efforts, but also the government’s diligent use of the country’s foreign currency reserves to stabilise domestic prices via the purchase of imports from its main trading partner, China.

Regardless, the impact on the country’s relatively weak foreign currency reserves dictates that sanctions relief is a pressing need, along with humanitarian aid, specifically food aid, to alleviate the crisis and hardship being felt by a large section of the population, particularly in rural areas.

Russia’s position as a permanent member of the UN Security Council, therefore, where in conjunction with China it has already been arguing for sanctions relief for the DPRK, ensured that the first summit between both countries, since Kim Jong-un’s ascension to power in 2011, could not have come at a more crucial time. A sober appraisal of the issue negates the possibility of any real progress being made when something of a neocon renaissance has ensued in Washington, marked by the return of Mr Bolton to high office.

Perhaps it will be a case of waiting and hoping for a more emollient administration to enter the White House after the 2020 US presidential elections. But, saying that, there is a strong case to be made that on foreign policy, with the notable and noble exception of Tulsi Gabbard, an ironclad consensus reigns when it comes to the officially-designated enemies of the Republic.

The principles of realpolitik dictate that only the strong can compromise and only equals can reach agreement. The Democratic People’s Republic of Korea is in no position to do the former and cannot afford to lose the means by which to maintain a semblance of the latter. The hardship its people are experiencing is the price of independence and the refusal to bow to the Empire.

Russia and China represent hope of a future empire-free. The plight of the DPRK is just one reason why this particular future cannot come soon enough.