Poroshenko Out, Zelensky In. Will Things Change in Ukraine?

25 Apr 2019 – The incalculable damage that’s been done to the region for cynical geopolitical goals can never be undone but it can stop. 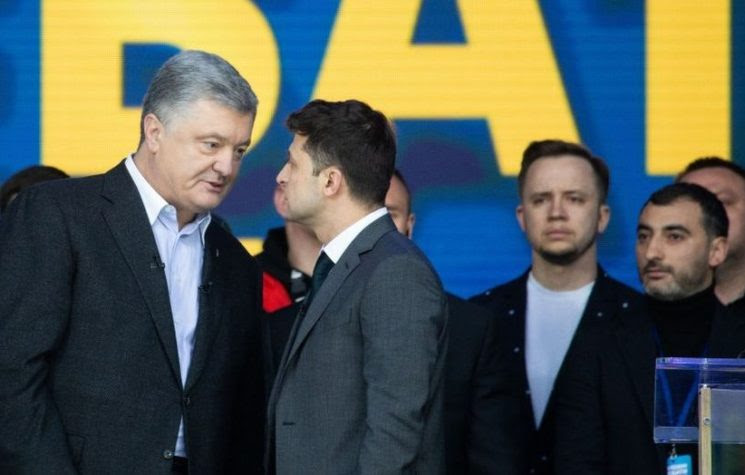 With art imitating life presidential elections in Ukraine ended with Volodymyr Zelenski garnering a massive majority over incumbent Petro Poroshenko. So, let’s get right to the point.

Will this change anything?

The West poured a lot of money and time into Poroshenko. It was obvious months ago he was not going to win a second term no matter what he did. With him mostly gone from the scene it is now up to Zelensky to put together a plan which goes far beyond the protest vote against Poroshenko’s obvious corruption.

The problem is we have no idea if he’s 1) capable of doing this or 2) strong enough to implement anything he comes up with.

With his party polling below 30% it’s clear this wasn’t a mandate for him but one against Poroshenko. The probability is high that he will be unable to form a stable, majority government later this year if his election isn’t a country-wide revolution but rather a short-lived temper tantrum.

Let’s hope it’s the former. Given just how deep the US ties into Poroshenko and Yulia Tymoshenko are I would bet on the latter, unfortunately.

So, his next steps are important. And the issues facing him are severe.

From the Donbass, which he supported reconciling with versus Poroshenko’s unbridled belligerence, to Crimea. Zelensky will have to face down enormous political pressure to solve them in ways that reflect reality.

That means mending some of the bridges burned under Poroshenko with Russia, which he says he wants. But the question is whether he realizes that much of the anti-Poroshenko vote is tied into this. And just how tenuous his position as president truly is.

It means he will need to look Southeast to Pakistan where outsider and supposed political neophyte Imran Khan is walking a similar tightrope as a geopolitical hot potato. Khan is trying to do unite the civilian and military arms of Pakistan’s leadership under one roof.

And, so far, Khan has acquitted himself well. He’s cut deals with both Saudi Arabia on energy and Iran on border security/terrorism. He’s survived major conflagrations with India and Iran; false flag operations timed to create maximal chaos and paralyze his government and any reforms.

In short, Zelensky will have to lead. It will mean talking with Putin. It will mean giving up something to put the Western vultures, both in the US and Europe, at bay. And he needs to do so in a way that is orthogonal to Poroshenko.

If Zelensky is going to survive and bring Ukraine out of the mess that it’s in, he’s going to have to realize that rapprochement with Russia is the way forward.

It means having the courage to not make unruly demands on Putin. Poroshenko spent the last year of his presidency leaving poison pills behind for whoever succeeded him.

Breaking the Treaty of Friendship and attacking the Kerch Strait Bridge being the two big ones. He has to agree to back off on military use of the Sea of Azov and accept blame for the incident in return for getting the sailors Russia holds freed.

Ending the bombing of the Donbass is also needed, disengaging back to the Minsk contact lines and stop lying about the situation. This would go a long way to establish a baseline of trust.

And it’s low-hanging fruit. Ukrainians outside of the insane American diaspora, want this done. But, it’s also on a short-timer because 2019 is slipping away and a lot of energy issues have to be solved.

Putin upped the ante barring coal and oil exports to Ukraine last week placing Ukraine in a very vulnerable position come this winter. And remember, no gas transport deal at the end of this year as well.

He is not without leverage as the EU has dragged its feet on the final approvals of the Nordstream 2 pipeline. This is a pivotal moment. Gazprom and Russia are pot-committed to the project, with it nearly complete and the EU is now trying to leave it unfinished to inflict maximum pain.

The Ukrainian economy is collapsing. Coal production is down 8% year-over-year. Putin knows this and has Zelensky in a stranglehold.

Angela Merkel has made no bones about how important securing gas transit through Ukraine is to getting the EU to change its policies towards Russia. And Vladimir Putin will not budge on his negotiating any new deals until Ukraine changes.

Strategic Culture Foundation provides a platform for exclusive analysis, research and policy comment on Eurasian and global affairs. We are covering political, economic, social, and security issues worldwide. Since 2005 our journal has published thousands of analytical briefs and commentaries with the unique perspective of independent contributors. SCF works to broaden and diversify expert discussion by focusing on hidden aspects of international politics and unconventional thinking. Benefiting from the expanding power of the Internet, we work to spread reliable information, critical thought and progressive ideas.