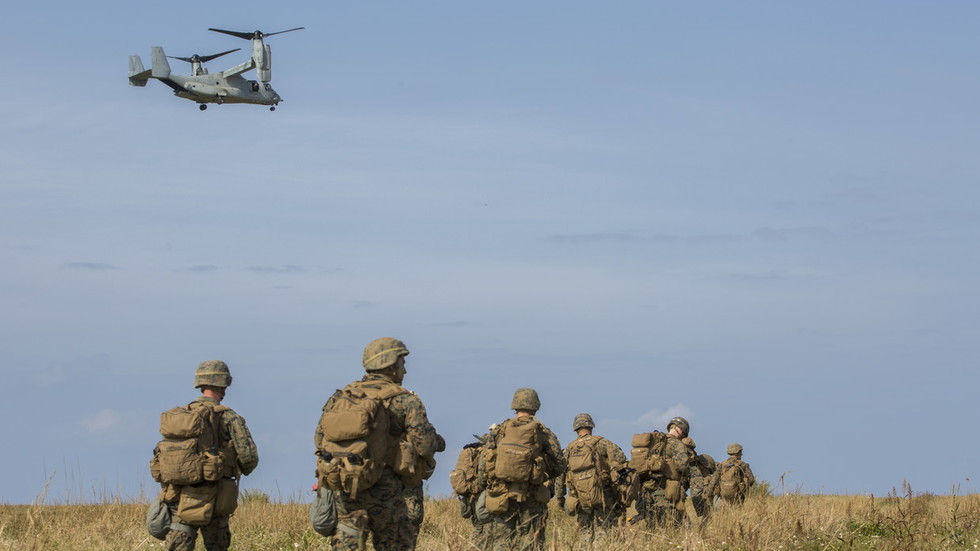 29 Mar 2019 – Just recently, the US military launched a full-on invasion of an island in the East China Sea to send a strong message to China, and yet barely any mainstream media outlet has covered the story or its massive implications.

Last week, US marines from the 31st Marine Expeditionary Unit invaded a tiny island in Japan’s Okinawa archipelago, known as Ie Shima. Ie Shima is approximately 23 sq km, holds an airstrip, a fishing port and a local population of about 4,500 inhabitants.

Colonel Robert Brodie announced the planned operations in a Marine Corps statement last week. According to Colonel Brodie, because the Indo-Pacific region is “incredibly dynamic” the US Marines are preparing and training daily for “real world crises” coming about as a result.

The crises he is referring to is the loss of the Indo-Pacific region to an adversarial state, being China.

Island-snatching will be “critical for us to be able to project power in the context of China,” Marine Corps General Joseph Dunford, chairman of the Joint Chiefs of Staff, also said at the beginning of March to a Senate Armed Services Committee.

“In the South China Sea and elsewhere in the region, we also fly bomber missions, demonstrating a resilient global strike capability that checks Chinese ambition and assures our regional Allies and partners. Throughout the Pacific, our troops exercise and engage with partners to signal our commitment and counterbalance China’s challenges to the rules-based order,” he added.

The remnants of World War II was fought and won in the Pacific, a challenging feat which came with an enormously costly death toll. US soldiers ventured from island to island, fighting lengthy and deadly battles against the Japanese forces. For example, Okinawa lost at least one third of its population during the final battles of World War II. The horror and difficulty in fighting such a war still weighs heavy on the mind of the US military, who now appear to be attempting to practice for such an island-battle scenario in the future (which is officially known as the Expeditionary Advanced Base Operations concept).

According to a US Marine release, the invasion began with troops dropping at free-fall from a high-altitude, who then quickly moved themselves into positions where they could begin attacking defenses. The free-fall technique had already been practised in Okinawa by US marines in August last year, meaning the US has been actively preparing for these scenarios for a while. Maybe now when I sound the alarm that the US is cultivating a showdown with China in the Pacific region, people can start taking me seriously.

In fact, this strategy appears to be part and parcel of an overall US capability which is giving Washington the edge over the People’s Liberation Army (PLA) of China, according to Meia Nouwens, a Chinese military expert with the International Institute for Strategic Studies.

“The greatest advantage that the US has at the moment over the PLA,” Nouwens said, “is that the US has been working on doctrine, training, professionalization for a lot longer than the PLA, with actual experience to back it up.”

After taking control of the island’s airfield, US troops set up a Forward Arming and Refuelling Point. Accompanying the invasion were low-flying MV-22 Ospreys (the same aircraft terrorising the local Okinawan population) and F-35B stealth fighters and C-130J Super Hercules.

More: US flies B-52 bombers over disputed waters near China

No one will come right out and say it, but it certainly seems as though the US military is actively preparing for a third world war. If this media blackout on the implications of these recent developments wasn’t bad enough; even more bizarre is the complete silence from the media on the enormous geopolitical activity itself.

A brief search of Google News reveals that only a handful of media outlets even covered the event, many of which are not typically regarded as internationally mainstream sources. A ProQuest search for media coverage of the story in fact returned zero results. The most prominent western outlet that covered the story is Business Insider, as well as a number of military sites.

I cannot find any mention of this story on any of the major news sites, whether it’s CNN, MSNBC, the Guardian, BBC, the New York Times – take your pick. Remember that the adversarial, independent and free media who is entrusted with informing you and keeping you up to date barely even mentions geopolitical manoeuvres that could lead to a global conflict.

More: We must be ready to use ‘hard power’ against Moscow and Beijing – UK defense chief

The build-up to war with China

In other news, the Trump administration has also given “tacit approval” to a request from Taiwan for 60 new F-16 fighter jets, a move that is already making China furious in response, who demanded that the US sever its military ties with what Beijing views as a breakaway, renegade province. Instead of heeding these warnings, the US is also considering selling Taiwan Lockheed Martin’s newest stealth fighter jet, the F-35. The US is also hoping to expand its arms sales to other countries within the region, particularly those that rely on Russia and China for its military equipment.

At the same time, the Pentagon confirmed this week that it had carried out an intercept of an unarmed missile making its way across the Pacific, using interceptor missiles launched out of southern California.

Approximately a day ago, Japanese jets intercepted a Chinese anti-submarine aircraft equipped with electronic warfare and a variety of electronic and signals intelligence gathering platforms over the East China Sea, the first such encounter of its kind.

Earlier this week, the US navy also sailed right between China and Taiwan passing through the Taiwan Strait into the South China Sea, accompanied by Coast Guard ships. Unsurprisingly, this move also irked China, who again urged the US to recognise its one-China policy, which appears to be completely eroding under the watch of the Trump administration.

Regardless of whether or not China’s outrage to the Taiwan question is reasonable, the stakes of this provocation are much higher than we seem to give them credit for. Even US defense officials are warning that China and the US could eventually reach a showdown, particularly over the Taiwan question. Chinese President Xi Jinping already declared early this year that any attempt from Taipei to assert its independence will be met by an armed response.

Funnily enough, these same US military officials warn against the rise of a World War III scenario with Beijing, yet they maintain that by arming Taiwan and beefing up its defenses, the US could avoid such a scenario. There seems to be no sane and sound voice at all who is given airtime on this topic to voice the other alternative: that if the US were not to incessantly pushback on China and mind its own business, a major conflict could in fact potentially be avoided in the long run.

Also: US accuses China of preparing for WWIII: What you’re not being told

US will counter China wherever possible

So, to summarise: the US has invaded approximately half of the Middle East, has troops deployed all over the African region, is vying to invade Iran, Venezuela, and demolish North Korea, and at the same time, sees fit to invade a helpless island in the Pacific region. And yet – China, currently invading no one, is still the largest overarching threat to the US military and its interests.

For example, an internal cybersecurity review recently concluded that the US Navy are “under cyber siege” prompting the Navy to keep high-level promotions a secret for fear of Chinese hacking. According to Defense News, a recent Air Force wish list includes, among other things, that it would like more money for advanced technology to confuse Russia and China. Any talk of military expenditure or military capabilities from Washington almost always fixates on China, and what the US needs in order to counter China’s expanding influence and military presence in the region.

But not to fret – the US has been seeking areas to cooperate with China where possible, but when it isn’t possible, the US is “prepared to certainly protect both US and allies interest in the region,” as Marine Lt. Gen. Kenneth McKenzie said at the Pentagon last year. According to McKenzie, the US military “has had a lot of experience in the Western Pacific taking down small islands.”

“We had a lot of experience in the Second World War taking down small islands that are isolated, so that’s a core competency of the US military that we’ve done before,” he explained.

Perhaps the rest of the world can start to wake up to this looming disaster; but unfortunately, not if most mainstream media outlets refuse to even cover these developments as and when they arise. Thankfully, they’re busy scrambling after spending two years on what can only be described as one of the greatest conspiracy theories of our age.