They armed Gadaffi and the forces that ousted him alike – now they’re repeating that profitable trick. 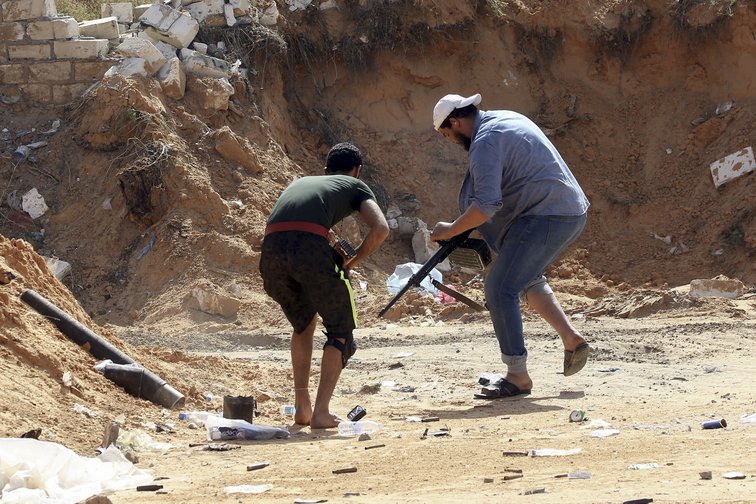 Fighting for the Libyan government, but the money goes for bigger guns.Stringer/DPA/PA Images. All rights reserved.

18 Apr 2019 – Top of FormIn the shadow world of the arms trade there is one business model that outshines all others: selling arms to both sides in the same war. Ideally it works best when weapons you have sold to one side destroy weapons you have sold to the other. Thus if one side uses air-launched precision-guided missiles to destroy the other’s aircraft (or tanks, armoured personnel carriers or whatever), then it will need to buy replacement missiles, will need to have your people service its aircraft and, if it ‘wins’ the war it will most likely buy new planes from you as it rearms. The other side will need to replace the materiel destroyed, will want to upgrade its weapons and also buy in heavily for the next phase of the conflict.

All this is a matter of routine business and the results of a war will often be reflected in marketing afterwards. In 1982 the UK fought a short and bitter war with Argentina for control of the Falklands/Malvinas; in the months that followed military magazines carried full-page adverts for ship-based anti-aircraft missiles that had been successfully used to shoot down Argentine aircraft. The adverts were the same as those published before that war but for the words ‘combat proven’ stamped across them.

There was bitter irony in this when it was learned that one such missile, fired from a British Type 42 destroyer, had shot down a British army helicopter by mistake, killing all four people on board. To add to the bitterness, two Type 42s had also been sold by Britain to Argentina before the war.

Arming both sides happens more often than is realised. One of the classic examples was Libya towards the end of the Gaddafi regime in 2011. What makes this particularly relevant just now is that it looks like happening again as Khalifa Haftar’s forces move slowly towards Tripoli.

For and against Gaddafi

First, though, look at the earlier example. As far as western countries were concerned, the autocratic Gaddafi regime had come in from the cold in 2004 after the war in Iraq. The previous arms embargo had been lifted in 2005 and within a couple of years this oil- and gas-rich state was seen as a prime customer for arms. From 2005 to 2009 the EU granted €834.5m of arms export licences, Italy being the largest seller at €276.7m, with the UK also doing well at €119.35m. Then a British company, NMS International, organised the UK Pavilion at the Tripoli Arms Fair in November 2010, barely four months before the west went to war with Gaddafi on 19 March 2011.

From the arms industry’s point of view, what should have happened then was that western states would have spent plenty of money replacing the expensive missiles and guided bombs they used, while a pro-western Libya established after Gaddafi had been lynched would have wanted to build a modern air force, army and navy, buying lots of weapons from those friendly western states that had helped terminate the previous regime.

The first part worked fine but the second didn’t. Libya descended into disarray – but even that disaster was not all bad news for the arms trade. One of the grim results of the 2011 war was that arms cascaded out of Libya across the Sahara and Sahel, greatly boosting the numerous Islamist paramilitary movements across the region. To counter this, thousands of western troops are now deployed across the region, air and drone strikes are commonplace, millions of dollars’ worth of precision-guided munitions are being used and vast amounts of equipment are being provided to many governments.

It is a hidden war that is very good indeed for business and is now being enhanced by a sudden escalation of the burgeoning civil war to the north in Libya itself. There, the UN-backed Government of National Accord in Tripoli is facing the forces of the self-styled Libyan National Army from the east of the country, headed by Haftar, a former Gaddafi military leader. In the past few days Haftar’s army has moved closer to Tripoli itself as it tries to take over the whole of the country, even as UN personnel seek vainly to arrange a ceasefire.

The government has recently been equipped by western states. In one episode over the weekend government forces shot down a Libyan National Army aircraft. Since then, the LNA has moved close enough to Tripoli to fire artillery that has killed at least four people and wounded twenty in the southern district of Abu Salim. Thousands of people have been displaced from their homes with at least 150 killed in this most recent bout of the war.

One aspect of the war is particularly good news for the arms industry. While the conflict is between the government and the LNA, above them are outside actors. Much of the weaponry of the UN-backed government comes from western states, with Italy being the most prominent. That is one of the reasons why the government is proving more resilient than some had expected, although there are also regional supporters involved, including Qatar.

On the other side, the insurgent LNA is strongly backed by Egypt and the United Arab Emirates. They both want a united Libya under Haftar or another strong leader who will suppress dissent and be especially hard on Islamist paramilitaries. This backing extends to their direct military involvement, with UAE air force strike aircraft aiding the rebels as they move towards the capital.

This is where history repeats itself: the UAE is one of the heaviest buyers of western aircraft and munitions in recent years, second only to Saudi Arabia among the Arab states across the Middle East. In short, the western-backed government is fighting the western-equipped LNA. However it ends, and however many people are killed, injured or displaced, the arms companies and their shareholders will come out of it well.

Paul Rogers is professor in the department of peace studies at Bradford University, northern England. He has been writing a weekly column on global security since 28 September 2001; he also writes a monthly briefing for the Oxford Research Group. His latest book is ‘Irregular War: ISIS and the New Threat from the Margins‘ (IB Tauris, 2016), which follows ‘Why We’re Losing the War on Terror‘ (Polity, 2007), and ‘Losing Control: Global Security in the 21st Century‘ (Pluto Press, 3rd edition, 2010).